LEWIS HAMILTON kicked off his world championship defence in typical fashion by setting the fastest time in first practice ahead of the season-opening Austrian Grand Prix.

The delayed campaign finally got under way at Spielberg’s Red Bull Ring today, three-and-a-half months after the doomed Australian Grand Prix was cancelled and 215 days since the final competitive action in Abu Dhabi at the end of last year.

It marks the longest break in Formula One history after this season’s calendar was torn up in the Covid-19 pandemic.

But there was a familiar name at the top of the time charts in Austria, as Hamilton — this year bidding to equal Michael Schumacher’s record of seven world championships — set a blistering pace. 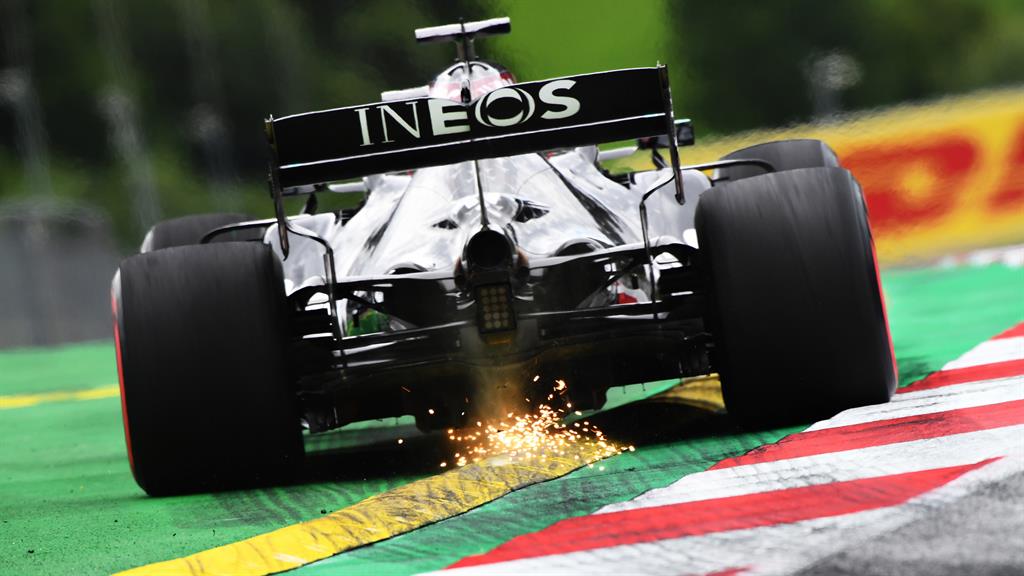 The 35-year-old Mercedes driver (pictured) finished a third of a second clear of team-mate Valtteri Bottas, with Red Bull driver Max Verstappen in third, 0.6 seconds off the pace.

Mercedes, which has ditched its traditional silver livery for black this term in the fight against racism, confirmed it is using its controversial Dual-Axis System (DAS).

The device, which it first unveiled at testing in February, allows Hamilton to pull his steering wheel towards him, narrowing the alignment of the front wheels on his Mercedes and increasing his straight-line speed. He can also push the wheel away before cornering to improve the car’s set-up.

And the early evidence suggests that the concept will enable the sport’s all-conquering team to begin yet another campaign as the one to beat as it goes in search of a seventh consecutive drivers’ and constructors’ championship.

Team principal Toto Wolff was wearing a face visor in the Mercedes garage as the sport operates under unprecedented measures during the coronavirus crisis.

Face masks are mandatory, while teams are operating in mini-bubbles to ensure a positive Covid-19 test will not close the show as it did in Melbourne back in March. There were no fans at the circuit.

It was McLaren’s withdrawal — after one of its team contracted, and later recovered from, the virus — that set the chain in motion for the event to be called off.

The British team will have been pleased here to see Carlos Sainz fourth in the order, with team-mate Lando Norris in sixth. Racing Point’s Sergio Perez spilt the pair in fifth.

Ferrari is running the car that proved to be off the pace in testing before it introduces its updated machine at the scheduled third round in Hungary later this month.

Charles Leclerc was only tenth here, an eye-watering 1.1seconds behind Hamilton, with Sebastian Vettel even further back in 12th. The four-time world champion could be entering the final year of his career if he is unable to find a seat for 2021 after being dropped by Ferrari.

The second running of the weekend was due to happen this afternoon.