A STUNNING memorial to Britain’s war heroes has been created — on the rear of a muddy van.

Creative Shaun Harvey, 34, used his fingers to create a remarkable montage in the dust and dirt on his van’s rear doors.

He was inspired by his six-year-old son Zak, who asked him to draw something relating to ‘poppy week’.

A self-employed gardener, Shaun spent an hour and a half working on the drawing and wants it to remain in place until the centenary of Armistice Day on Sunday.

He purposefully drove his Vauxhall van through muddy puddles so that the back got covered in dirt.

Once it was fully coated Shaun consulted with Zak about what to draw and then set to work.

Shaun, from near Boston, Lincolnshire, said: ‘The picture is just drawn out of mud on the back of my van.

‘I just worked on it bit by bit and eventually ended up with something that’s pretty good.

‘I did it for my little boy who has been saying that it’s “poppy week” all week.

‘We live right by RAF Coningsby and so we see the planes going overhead, sometimes Lancasters even fly over.

‘Zak really likes them and wanted me to draw one.’

He added: ‘There’s a lot of farms and fields where I live and I spent lots of time driving on back roads.

‘I aimed for muddy puddles so that I’d get the back of the van covered in mud so I could draw on it.’ 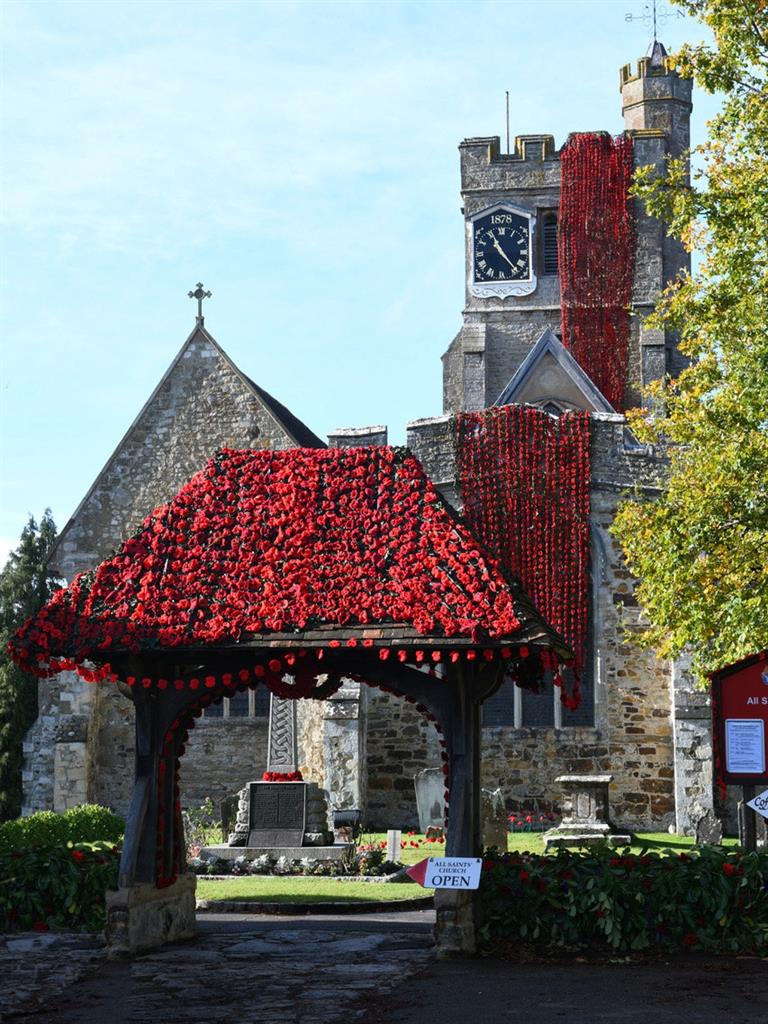 A VILLAGE church has been covered by an ‘army of knitted poppies’ to mark the hundredth anniversary of the end of the First World War.

Residents from the Kent village of Biddenden, famous for its extra strong cider, spent the last year knitting the 8,000 poppies used for the tribute following the success of a smaller display last year.

Reverend Alexander Bienfait, who has led the Church of England parish for 12 years, said: ‘It is very beautiful and striking.

‘There is something very powerful about it — it’s very arresting and you can’t help but stop, look and think

‘The First World War was not won by just one person but by people working together.

‘For the community, is has been very important in the way people have worked together to create it and there is something very moving about it.’

Ten World War I perspex silhouettes are also on display inside the church to honour the thirty veterans from the local area.

Rev’d Bienfait added: ‘There is something very haunting and ghostly about the atmosphere inside which is all part of the remembering and thinking of those who died.’

The stunning tribute is attracting crowds of people who come to reflect, pay their respects and admire the efforts of the volunteers who helped fund and create the display.

The church will remain open during daylight hours throughout the month-long tribute which began on October 27.