WHILE I’m quietly enjoying a weissbier on the balcony of Motel One’s Cloud One Bar, the familiar strains of Bach float gently up from a posh busker outside. I look out over Leipzig’s skyline — a mash-up of industrial sprawl, Stalinist monoliths and the odd bit of Bauhaus — and think how, 30 years ago, this charming, open city was locked under Soviet rule.

In October 1989, Leipzig hit the headlines when 70,000 took to the streets in a protest against the East German regime. That led to the collapse of the Berlin Wall a month later.

From my hanging egg chair I can see the route they took around Augustusplatz, past the Panorama Tower and the new blue-glass facade of the University of Leipzig, whose famous alumni include Goethe, Wagner, Nietzsche and Merkel.

I’m staying at Motel One Leipzig-Post, a 300-room hotel from the German design brand that opened in the former Deutsche post office last year. It makes a good central base, a five-minute walk from the Grassi museum and Leipzig opera house.

A postal theme runs through the 1960s block. The check-in desk looks like an oversized envelope and there are old mailboxes nailed to the walls. The rest of the lobby has odd-shaped colourful sofas by Moroso, lamps made from tangles of trumpets and a fabulous mural by local Paule Hammer entitled Map Of A Dream World. 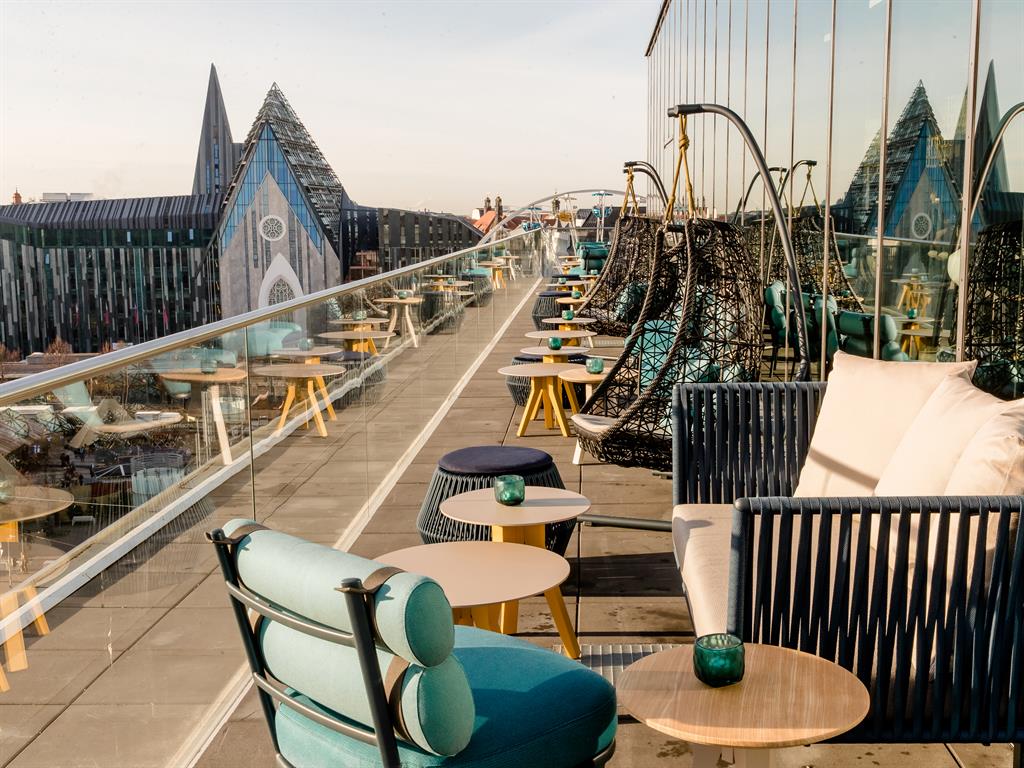 On the seventh floor is a 24-hour lounge with postage-stamp wall coverings designed by art students and post-office-yellow chairs, while the eighth-floor bar references airmail.

And while classical music dominates the streets — the city was home to Bach, Mendelssohn, Wagner and Schumann — the hotel has more of an EDM beat, perhaps a nod to nearby Distillery, which is the oldest techno club in Germany.

The room: There are three types: queen, king and king with a balcony (from £77pn, motel-one.com). All have a pared-back urban style — think teal, massive TVs and mid-century-style hints.

My room is mostly window and has excellent views of the city (but also electric blinds and velvet curtains to protect one’s modesty).

Sleep comes easy on the big, bouncy box-sprung bed with marshmallow pillows, while waking up is rewarded with a spin in the huge rainfall shower.

The tribe: At breakfast (an organic continental buffet, £10.50pp) the guests range from sharply dressed moustachioed fellows and fashionable women with oblique hairstyles to a smattering of older suits.

The local vibe: Hop on the 15 tram outside the hotel to Plagwitz and the Kunstkraftwerk Leipzig (£10, kunstkraftwerk-leipzig.com), a former power plant, now a stylish arts centre.

At night it’s a short ride on the tram from Karl-Liebknecht-Strasse, or ‘KarLi street’ as the cool kids call it, a buzzy student area with lots of pavement bars and cheap bistros.