THIS was the scene yesterday on the immaculately trimmed green lawns of genteel Hove after its seafront was taken over by travellers.

A convoy of about 40 motorhomes and caravans rumbled into the East Sussex resort at lunchtime on Saturday and quickly turned the area into an eyesore, with rubbish and plastic bags strewn across the grass.

An onlooker said: ‘I saw them arriving at 1pm. There were loads of them — it was ridiculous.’

Hove Lawns is subject to a public space protection order, meaning that no one is allowed to stay there for more than 12 hours. The travellers set up camp opposite the regency buildings of Brunswick Terrace and Square — where two-bed flats sell for around £800,000 — and the Angel of Peace statue.

Local conservative councillor Dawn Barrett said: ‘If I were to go and park my car at Preston Park or Queens Park or anywhere else, I guarantee it would be moved within 12 hours.’ 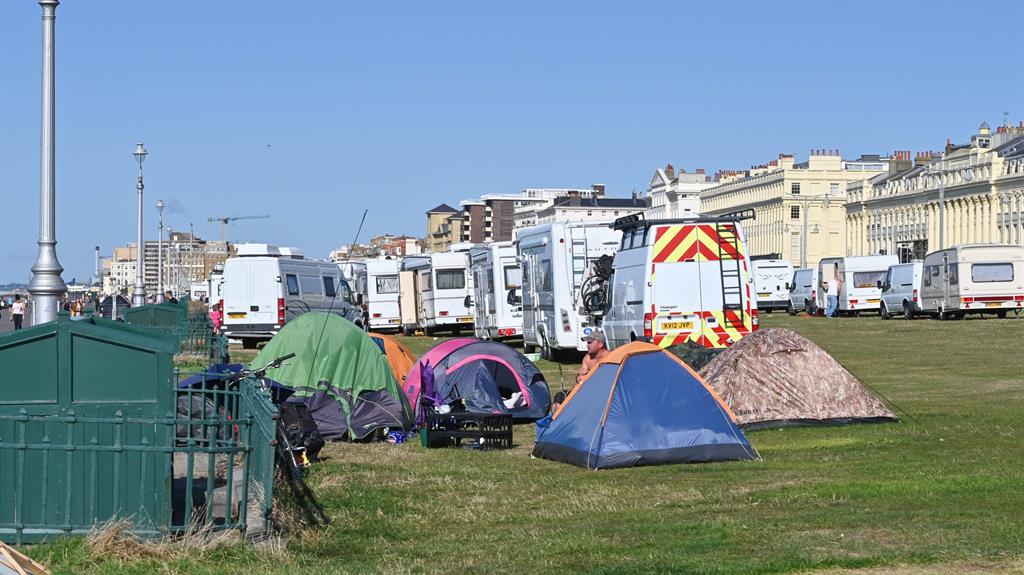 The traveller occupation came days after homeless people put up tents on the same spot of grass.

The tents have been described by Brighton and Hove Council as a ‘complex legal matter’. A spokesman said: ‘Our teams are looking into this.’

But Ms Barrett said: ‘The council should have removed the tents. It has opened the floodgates.’