GOOD Morning Britain presenter Laura Tobin has hit back at an Australian MP who branded her an ‘ignorant Pommy weathergirl’ on Facebook after she called him a ‘climate change denier’ on air.

The meteorologist clashed with Craig Kelly on the ITV show when he claimed it was ‘nonsense’ to say lower carbon emissions would help stop bushfires that are devastating Australia.

The Sydney politician said the blazes were caused by poor forest management rather than climate change.

But Ms Tobin tweeted: ‘Ignorant could not be further from the truth! I know what I’m talking about, do you?’

She pointed out that she has a degree in meteorology and physics, and spent four years forecasting for the RAF before entering the world of TV.

So far, the fires have killed 25 people, razed 2,000 homes and ravaged millions of acres of bush and farmland.

Ironically, the damp conditions hindered their efforts to starve the fires of fuel by ‘back burning’ — starting small blazes in at-risk areas. In New South Wales, 50 out of 130 fires still burning were said to be ‘out of control’ as officials stressed the danger was far from over.

In Mallacoota, a town on Victoria’s coast, thick smoke hampered navy efforts to airlift people out.

The fires have also taken a devastating toll on livestock and wildlife, with kangaroo carcasses littering roadsides.

Victoria premier Daniel Andrews said he could ‘barely imagine the grief’ of those dealing with the aftermath. 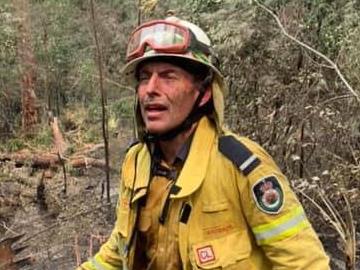 ■ FORMER Australian prime minister Tony Abbott has been filmed putting out a blaze on the New South Wales coast amid the wildfire crisis. The volunteer firefighter, 62, wore breathing equipment and an oxygen tank as he battled flames engulfing a home in Bendalong in 45C heat. A volunteer for nearly 20 years, he has been praised for his work this bushfire season.