IF IT wasn’t for the iffy English autumn weather, this Frank Lloyd Wright-inspired single-storey property, surrounded by a backdrop of towering, mature trees and exotic plants, could easily be nestled in the Los Angeles hills. Except it’s not. We are in North Chailey, near Lewes, not Northern California.

The fittingly named The Ranch could be the perfect antidote to London’s housing market. For around the same price as a two-bedroom apartment in Clapham North, it is a picture of tranquillity, set back from the road within a 417-acre nature reserve packed with rare butterfly and bird species, grazing sheep, Sussex Longhorn cattle and ponies.

It was designed by Leslie Gooday, the renowned architect who worked on the Festival of Britain Southbank exhibition in 1951 and the British pavilion at the 1970 Expo in Japan. Leslie was known to adore the ‘organic architectural designs’ of Lloyd Wright.

The property’s owners, Stuart and Leigh Scotland, had lived in an apartment in central London for several years before embarking on a quest in the early noughties: to find the California living vibe, close to the capital. Then they saw The Ranch. ‘I immediately loved it,’ says Stuart. ‘We lived in San Francisco and had friends in the suburbs who lived in spacious single-storey ranch houses with loads of garaging. Having lived in a flat in London, moving to the countryside, with a large garden, spacious house, lovely views of the South Downs and a large garage ticked all the boxes.’

What is perhaps most striking about the house is its sense of restraint. With most plots just outside of London succumbing to thrown-up mega mansions, with little regard for outdoor space, The Ranch is the opposite. The house cuts a modest profile with a single storey, the patina of its pitched, copper roof helping to fuse it to its surroundings rather than batter them into submission.

Dating from the 1950s, the style of the house follows the design principles of mid-century modern architecture. The lower portion is of yellow brick, left exposed within the property, and large swathes of glazing are further proof of the design’s interaction with the outside.

‘I am not a fan of these large show-off country houses,’ says Stuart. ‘This property provides all the space [we need] within an architecturally interesting building. Whenever people visit our house for the first time, they love the design, which dares to be different from the typical country pile.’ Stuart had grown up in the Dorset countryside and while it was nice to be back in a more rural location — despite being little more than an hour from central London by train — The Ranch’s dual-aspect glazed hall and expansive open-plan rooms offered much more space than the cottage he called home as a child.

Leigh is a textile designer who used to work with Alexander McQueen and Hussein Chalayan; she wanted the interiors to have a Californian feel to match the exterior. ‘We wanted to create a modern ranch feel, yet timeless as we have some old family furniture as well as modern fittings. A lot of modern homes can be quite cold in terms of decor and we wanted a warmer feel to the interiors, so that we all felt cosy, but in keeping with the overall look of the house.’

Leading through giant yucas, giant euphorbias and agapanthus from the large porch, visitors are welcomed into a dual-aspect glazed hall with tiled floor, which is pure California. It looks straight out onto the garden, with wood cladding and huge giant palms creating a dusky 1970s feel straight out of a period magazine.

To the left of the entrance hall is an expansive, south-facing sitting room with oak flooring, Ikea sofas and a large cowskin rug from America, arranged around a wood burning stove and chimney stack constructed in black brick. The prints on the wall are Japanese screen prints bought in San Francisco and fit in with the furniture and colour scheme.

Leigh says: ‘I like cosy, yet stylish, interiors. Comfort is as important as style. That reflects our attitude to everything and the house is a good balance of the two.’

The colour scheme is sandy yellow and gold with dark grey fitted furniture and cream and black, with slight hints of red and fuschia.

Walk back through the entrance hall to the main part of the building and four of the five bedrooms, including the master, are on the left, while the kitchen is straight ahead. The kitchen is bespoke with timber cabinets and worktops and original, tilting Crittal windows with views to the rear garden. The kitchen was the couple’s own design. Leigh particularity loves wood and wanted a solid wooden yet modern kitchen with a timeless elegance and beauty.

The worktop wraps around the whole of the units, all very thick and custom made by a carpenter to their specification. From the kitchen comes the family room-cum-dining room and last bedroom. The family room takes full advantage of the house’s mid-century architecture by pairing it with chunky corduroy sofas from a furniture shop in Brighton. ‘The sofas were bought specifically for cosiness and comfort,’ says Leigh, ‘We wanted our children to enjoy them and didn’t want to be too worried about messing them up. Everyone loves them.’ 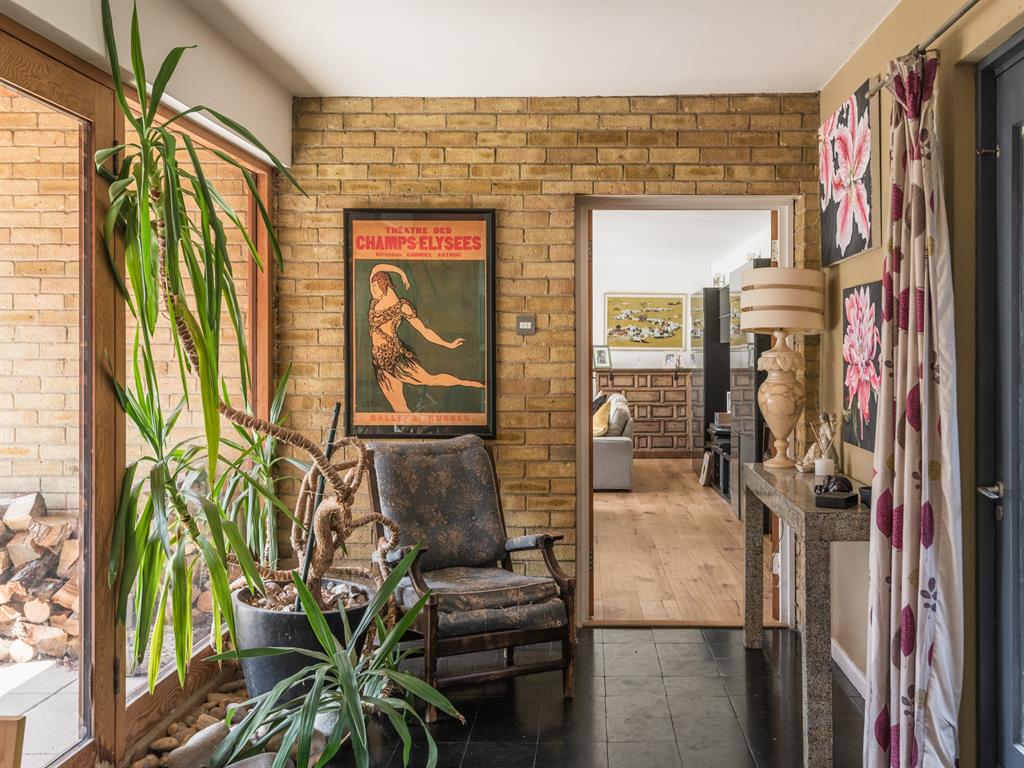 There are six original Arne Jacobsen chairs in the garage that require restoring, too — they are on the to-do list before the house is sold. Having made it their home for 16 years, the couple are now looking for paradise somewhere else. ‘Our next move is hopefully to design and build a house from scratch,’ says Leigh. ‘This is our dream as we both have building and design at our core.

Stuart is in building. He designed the extension with the pitch roof and kitchen. He made the house more ranch-style looking, massively improving it while trying to be in keeping with the style of the rest of the house. My father designed and built houses in England back in the 1950s and 1960s. It’s time for a new adventure and a new challenge.’