DONALD TRUMP turned up late to a Veterans Day ceremony to honour America’s war dead in his first public appearance since Joe Biden’s election victory — after spending the morning raging online about his defeat.

The president left serving personnel, veterans and their families waiting in the rain, eventually arriving at Arlington National Cemetery, in Virginia, at 11.25am — missing the traditional silences at 11am and 11.11am. 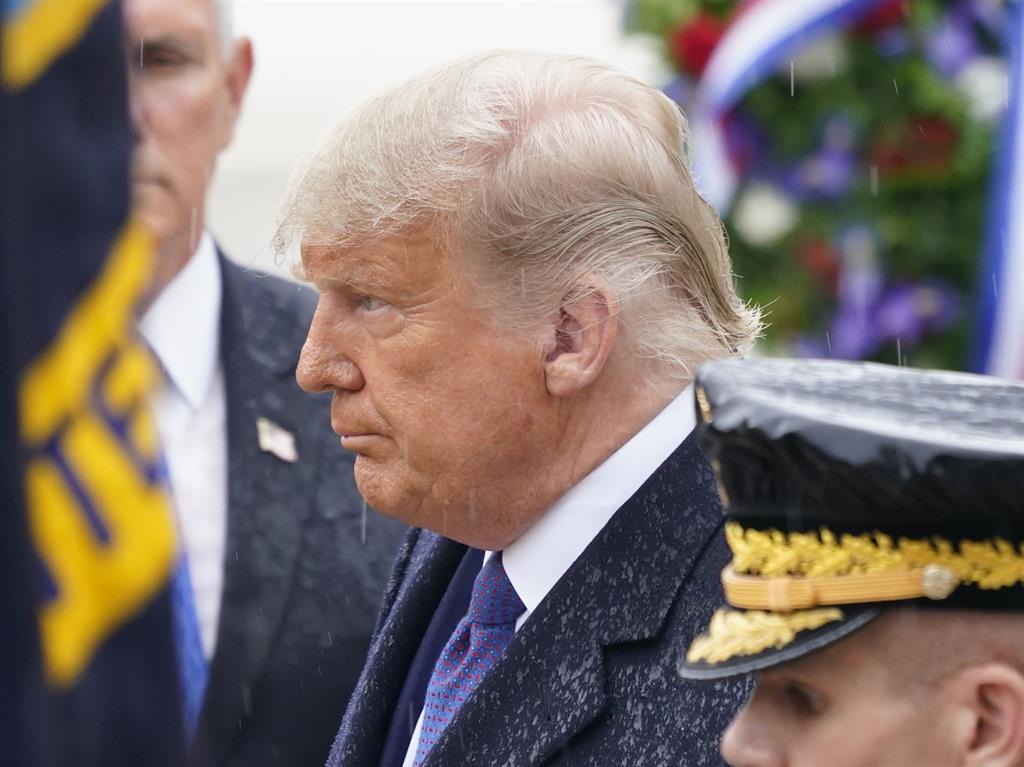 Mr Trump’s late show came as his bid to hold on to the presidency was given a minor boost. He appears, as expected, to have secured Alaska’s three electoral college votes and Georgia’s secretary of state Brad Raffensperger ordered that all 5million votes cast there must be recounted by hand.

The president, who trails his rival by around 14,000 votes in the state, alleges electoral fraud has taken place but his numerous legal challenges have, so far, been rejected by courts and officials say there is no evidence of widespread fraud affecting the overall result.

Announcing the recount, due to be completed by the end of next week, Mr Raffensperger denied claims his decision had been influenced by pressure from the president’s Republican party supporters.

‘We’re doing this because it makes the most sense with the national significance of and the closeness of this race,’ he added. Before arriving at Arlington, Mr Trump continued to tweet claims of electoral fraud and alleged his party was set to win in Wisconsin — despite trailing by at least 20,000 votes.

He also accused a Republican commissioner in Philadelphia of refusing to ‘look at a mountain of corruption & dishonesty’, adding: ‘We win!’

Mr Trump made no statement at Arlington where he was greeted by military chiefs, despite facing criticism from some veterans for his past remarks. He was accused of refusing to visit a US military cemetery in France in 2018 for fear of getting his hair wet in the rain and over his alleged view that war casualties were ‘losers’.

Mr Biden, who won a record 75million votes in the election, said on Tuesday his rival’s refusal to concede defeat was ‘an embarrassment’ and joked it was damaging his ‘legacy’.