A TERRORIST shot dead by police after stabbing two people had bragged that he wanted to unleash carnage on the streets by playing violent video games ‘in real life’, it has emerged.

Sudesh Amman, 20, told fellow extremists in an online chatroom that he hoped to act out scenes from Call of Duty, which involves spraying bullets at multiple enemies.

The latest console instalment of the popular franchise features a level that requires players to take on terrorists wearing suicide bomb vests in London’s Piccadilly Circus.

Amman, who wore a fake bomb vest during his attack in Streatham, south London, on Sunday, also mentioned PlayStation hit Far Cry 5 during a chat about killing victims with crossbows.

The Islamist was freed last month after serving half of a jail sentence for distributing terror publications.

Knife attacker Amman, described by his mother as a ‘nice, polite boy’, was charged and jailed after an undercover Dutch blogger infiltrated an extremist chatroom on encrypted app Telegram.

Using the pseudonym Abu Malik, Amman had written in April 2018: ‘Ugh, too much police, leave us alone.’ He added ‘we want to have fun with hoor al ayn’ — thought to refer to beautiful women — ‘and play COD irl’.

Irl is online slang for ‘in real life’. Amman, from Harrow in north-west London, also uploaded a photo of a Daesh-style black flag with a knife and gun resting on top of it.

‘Hahaha mummy dont like it,’ he wrote. When a pal asked if he meant the flag, he replied: ‘Nah the weapons. Flag not a problem as long as I dont show ppl [people]. She dont care she just dnt want trouble aha.’

Amman also wrote: ‘Splash splash. Make an kuffar [non-believer] drown in his blood,’ before adding: ‘Joke not tryna be bait for all u feds [police].’

Mr Van Den Berg said he believed that ‘joke’ claims and references to games were attempts to disguise the seriousness of views expressed. ‘They remain inventive, those boys — in their own encrypted world,’ he added.

Amman was jailed for three years and four months in December 2018 and became eligible for release just over a year later, with his time in custody before his trial taken into account.

He was gunned down by officers in plain clothes on Sunday afternoon within a minute of launching his attack on passers-by. 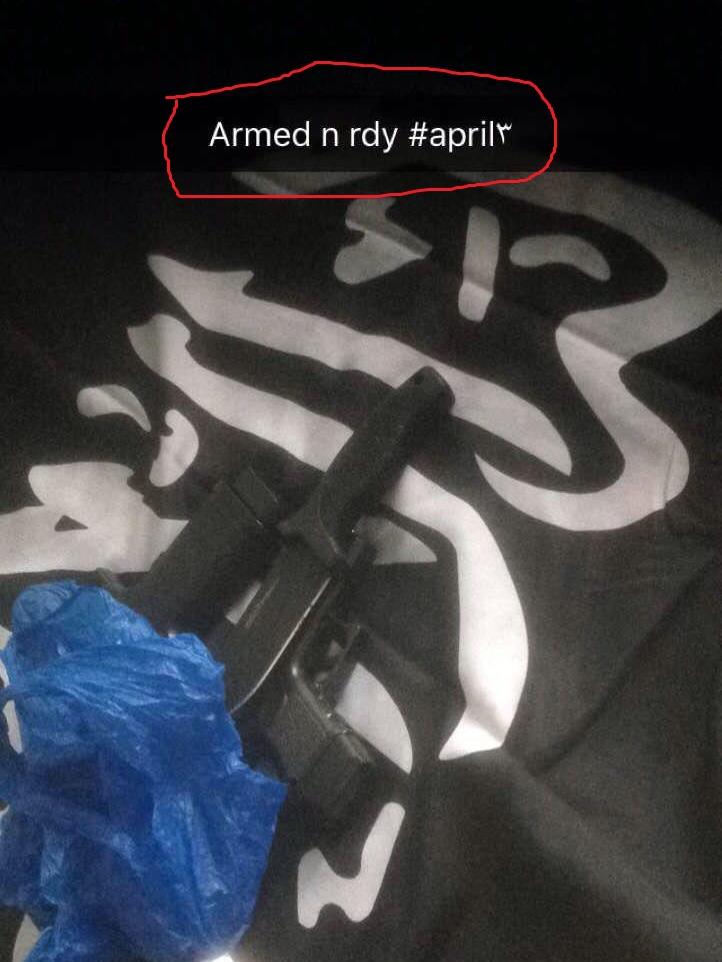 His most seriously injured victim, a man in his 40s, was last night no longer considered to be in a life-threatening condition. The other, a woman in her 50s, had been discharged from hospital.

Amman’s mother Haleema Faraz Khan said yesterday she believed he had been further radicalised in jail.

She told Mail Online: ‘He wasn’t even a very devoted Muslim.

‘He got radicalised while he was in Belmarsh Prison. He got into all this on the internet, but when he went to prison something happened to him.’

Ms Khan said she last saw her son on Thursday at a bail hostel in Streatham, where he was staying following his release from jail. She said she took food to him there and had been in touch to ask what he wanted.

She added: ‘He said “mum, I would really like a mutton biriyani” — so I cooked one and took it over to him.’

Amman sounded ‘normal’ when they spoke on the phone on Sunday, Ms Khan revealed. ‘I can’t believe this has happened to my son. He was a lovely boy. I was very close to him,’ she said.

Amman’s ex-girlfriend, who did not want to be named, said they split up after he sent her beheading videos and urged her to kill her ‘kuffar’ parents.

She told The Sun: ‘I’ve moved on with my life and erased it from memory.’

Police were yesterday searching Amman’s hostel and addresses linked to him in south London and Bishop’s Stortford, Hertfordshire.

The Call of Duty with the London scene was released after he was jailed.

■ THE MET said its officers shot Sudesh Amman within 60 seconds of his first attack. But it would not reveal surveillance details for fear of ‘undermining tactics used to investigate terrorists’.