KIRSTEN O’BRIEN started out in TV with Otis the Aardvark in the Broom Cupboard in 1996 on CBBC. She went on to host many children’s TV shows including Smile and Totally Doctor Who, before moving into consumer programmes and hosting shows on TalkRADIO and BBC Berkshire. She has three children, including twins, and is a keen property renovator.

I was 26 when I bought my first home in Camden in London in 1998. It was a one-bed terraced Victorian ground floor/basement flat with a garden. I was working on CBBC and had been renting the flat above. One Friday afternoon, the elderly man who owned the flat downstairs knocked on my door and said he had decided to move to Mauritius. I was frustrated he hadn’t come to me before engaging an estate agent as I’d always said I wanted to buy the flat.

What did you do next?

The next morning, I was on-air presenting kids’ telly and in between cartoons I kept ringing the estate agents until someone picked up. They hadn’t even prepared the paperwork for the property and I told them I would like to buy it for the asking price. They never did the paperwork and no one else saw the flat. It was the easiest house move ever as there was no chain.

Did you feel nervous taking on a mortgage?

I was so excited. I was a bit geeky, learning about mortgages. I remember thinking I needed to have £5,000 savings in case I came out of work. I never managed to save that much. I thought the worst that would happen if it went wrong is that I would have to sell. I got one of the promoters I worked for to write a letter to say that I was good for the money — imagine that these days.

What condition was the property in?

The flat was a state when I bought it. The elderly man had not done any repair work, so the first thing I had to do was get it deep cleaned. I then went about ripping up carpets and doing little cosmetic changes. My friend Siobhan came round and helped me pull up the stair carpet. The dust was giving me asthma but it was worth it when we exposed beautiful floorboards.

It’s on a quiet road but so central, you get to the top of the road and you are at the start of Camden market. I loved getting off the Tube into the hubbub but being home two minutes later. It wasn’t always quiet — we had squatters in the flat opposite and one of the neighbours protested on the roof of the community centre, leading to the street being cordoned off in a ‘siege situation’. But there was a real sense of community. I still pop back to see Aftab the local newsagent when I’m in the area.

Did you do much to the flat?

I completely renovated the flat, turning it from a one-bed into a two-bed. It had a strange layout with a lounge and bathroom on the ground floor and a kitchen and bedroom in the basement. I moved the kitchen upstairs and managed to put in an extra bedroom. Years later, I added a little sun room on the back.

Did it change your life?

It was my haven after all the madness of work. I loved living alone but it was a very social house, I always had barbecues and parties. My now husband moved in with me and we had our first son there, bringing him home from hospital and putting him under the Christmas tree. It’s filled with wonderful, happy memories.

Where did you go next?

I was there for 16 years before it got too small for us when our family grew. I was lucky that the flat had increased in value dramatically and it was enough for us to be able to buy a bigger home outside London. Funnily enough, we drove past yesterday and we were marvelling at the new shops and changes around Camden. It’s a great place to be when you are younger and I’m so glad I got to call it home. 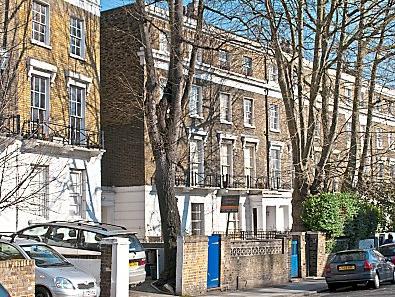 THE go-to place in the Noughties, this slice of North London has lost a little of its cool in the past decade. Rampant gentrification has kicked out much of the authentic Camden bohemia and the market has turned into a large souvenir shop, although the Hawley Arms and the Dublin Castle — the stomping ground of Amy Winehouse and Pete Doherty respectively — have survived. The properties are mainly Victorian houses divided into flats and studios at eye-watering prices. Last year, most property sales in Camden involved flats, which sold for on average £831,891. Terraced properties sold for an average price of £2,018,971, while semi-detached properties fetched £2,670,155 (rightmove.co.uk).