A TERRORIST washed his knife and wiped it on his beard in a ‘chilling gesture’ after killing eight people in the London Bridge and Borough Market attacks, an inquest has heard.

Khuram Butt, 27, was caught on CCTV cameras cleaning his 12in pink ceramic knife inside Black & Blue steak restaurant while Youssef Zaghba, 22, took a drink from the tap behind the bar.

Families of the victims were warned in the Old Bailey courtroom that ‘distressing images’ would be shown, and Butt’s reaction was ‘the most chilling’.

Earlier, the third attacker, Rachid Redouane, 30, was shown bending down to tie his shoelaces in the street during the rampage in June 2017.

In another CCTV extract, Redouane was seen talking to an unidentified man, and then walking away.

Jonathan Hough QC, counsel for the coroner, said: ‘There is clearly some form of discussions. We don’t know what was said. Despite appeals for witnesses he never came forward.’ 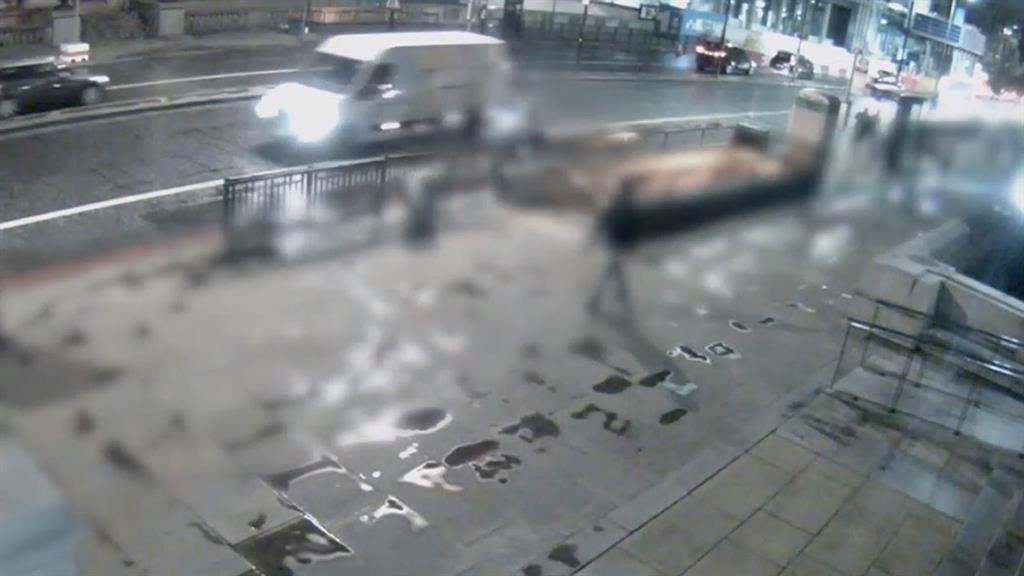 In the space of three minutes, the attackers had struck Xavier Thomas, 45, and Christine Archibald, 30, with a van on the bridge then fatally stabbed Alexandre Pigeard, 26, Sara Zelenak, 21, Kirsty Boden, 28, Sebastien Belanger, 36, James McMullan, 32, and Ignacio Echeverria, 39, around Borough Market. Within ten minutes, the attackers, who injured 48 others, had been shot dead by police marksmen.

Mr Thomas and Ms Archibald would not have died if barriers had been put up after a terror attack at Westminster Bridge two months earlier, said Gareth Patterson, QC, representing some victims.

In the CCTV, pedestrians were seen running for their lives as the van the terrorists used mounted the pavement at London Bridge.

Victims were thrown in the air before the van crashed into railings. Mobile phone video captured the panic among the Saturday night revellers when confronted by the knifemen shouting ‘Allahu Akbar’.

Erick Siguenza, who filmed the footage, was heard to exclaim ‘that’s terrorists’ over screams in the background. Some people appeared to stand up to the attackers, with one throwing a chair at Butt outside a restaurant. The last victim, Mr Echeverria, was seen swinging his skateboard at the knife-waving men as he ran in to help two unarmed officers.

Det Supt Rebecca Riggs said: ‘Ignacio managed to hit them. Redouane retaliated, causing him to fall. The attackers then set upon him on the ground.’ Mr Hough said: ‘It was a brief but furious assault.’

The onslaught came to an end when the attackers, wearing mock suicide belts, were shot by City of London Police marksmen. The inquest continues.