COVID testing and vaccinations are to be ramped up this week amid record deaths and hospital admissions.

People without coronavirus symptoms and who cannot work from home are to be prioritised for regular quick turnaround tests made available to every council in England — even twice a week.

The move is likely to include police officers, supermarket workers and taxi drivers. Expanding the community testing programme to more people without symptoms is ‘crucial given that around one in three people’ who contract the virus are asymptomatic, said the Department of Health and Social Care.

He said: ‘Lateral flow tests have already been hugely successful in finding positive cases quickly, so I encourage employers and workers to take this offer up.’

But Dr Angela Raffle, a consultant in public health with the University of Bristol Medical School, said increasing lateral flow testing ‘is very worrying’. She added: ‘Already outbreaks are known to have occurred because people have been falsely reassured by a negative lateral flow result, leading them to attend work whilst having symptoms.’

As part of the national vaccination programme, more than 500,000 invitations asking people aged 80 or over to sign up for a jab will arrive with recipients this week. The letters have been sent to those who live between a 30 to 45-minute drive from one of seven new regional centres in England. Ministers have set a target of offering inoculations to almost 14million vulnerable people in the UK by mid-February.

Showbiz royalty Joan is given vaccine same day as the Queen 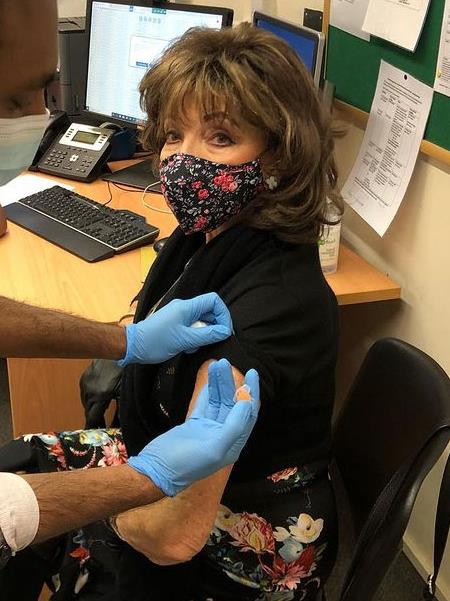 DAME Joan Collins receives the Covid-19 vaccination at London’s Bloomsbury Surgery. The actress, 87, said having the AstraZeneca jab on Saturday was ‘painless and seamless’. She said she was ‘delighted’ and noted in an Instagram post that she had received the treatment on the same day that the Queen and Prince Philip were vaccinated at Windsor Castle.