The Grease star revealed the actress had died on Sunday after fighting a ‘courageous’ two-year health battle, which they had not made public.

Preston, who starred in films such as Twins and Jerry Maguire, was married to Travolta for 28 years and described him on their wedding anniversary as ‘the most wonderful man I know’.

They have a daughter, Ella, 20, and a son, Benjamin, nine. But they faced tragedy in 2009 when another son, Jett, died aged 16 after having a seizure during a family holiday in the Bahamas.

Writing on Instagram, Travolta, 66, thanked cancer medics and said: ‘She fought a courageous fight with the love and support of so many.

‘Kelly’s love and life will always be remembered. I will be taking some time to be there for my children who have lost their mother, so forgive me in advance if you don’t hear from us for a while. But please know that I will feel your outpouring of love in the weeks and months ahead as we heal.’ Ella paid tribute to her mum, saying she had never ‘met anyone as courageous, strong, beautiful and loving as you’. 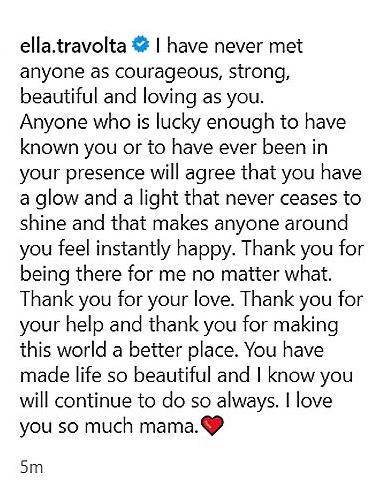 She later starred alongside him in Battlefield Earth and the 2018 film Gotti. Her last Instagram post was a Father’s Day tribute, calling Travolta ‘the best one (dad) we know’.

Hollywood star Josh Gad said he was in ‘absolute shock’ at the loss of ‘a beautiful and amazing actress and person’.

Lost actor Daniel Dae Kim, who starred with Preston in an early movie, said she ‘couldn’t have been warmer or kinder to a young, nervous actor’ and singer Mariah Carey wrote: ‘Sending so much love to you and your family.’