FEARS of festive food shortages have sparked the first Christmas panic buying sprees after 40 countries banned travel from Britain over the mutant Covid-19 strain — and the whole EU sealed its border from us.

Prime minister Boris Johnson urged people to shop normally and said he had ‘an excellent conversation’ with French president Emmanuel Macron to end a lorry logjam at Dover ‘within hours’.

But supermarkets said fresh fruit and veg could be affected unless France lifted its 48-hour blockade — aimed at stopping the strain crossing the Channel.

As hundreds of lorries — including ones driven by French truckers trying to get home — parked along Kent’s M20 motorway, Sainsbury’s warned produce could rot. It added: ‘If nothing changes, we’ll start to see gaps on lettuce, some salad leaves, cauliflowers, broccoli and citrus fruit — all of which are imported from the continent.’

But Mr Macron — isolating on his birthday after catching Covid-19 — is thought to want negative swab tests for every driver, taking up to three days.

Worried shoppers had hit the stores from 6am yesterday but still found queues. There were reports of scuffles and stand-offs similar to the start of the pandemic. Lucy Smith tweeted after visiting Aldi in Burpham, Surrey: ‘I saw a few people grabbing Yorkshire puddings from other people’s trolleys.

‘People were actually arguing with each other over them. It’s absolute madness. And I thought that things were bad enough without this nonsense.’

Rob Allen posted from a London Sainsbury’s: ‘In the supermarket queue at 5.50 to get my hands on blockade/Brexit bog paper. Mission accomplished — 24 rolls of quilted.’

But the PM said only 20 per cent of Britain’s food was affected because the ban was on ‘human-handled’ cargo at Dover, so container traffic at other ports was unaffected.

He insisted only around 170 lorries were parked on the M20. But ITV News business editor Joel Hills last night said sources close to Port of Dover and Eurotunnel were ‘baffled’ by the claim.

He added: ‘At the time Boris Johnson was speaking @Kenthighways told me there were 500. The number has just risen to 945.’ The PM said shipments of the new Pfizer/BioNTech Covid-19 vaccine from Belgium was unaffected, adding: ‘The vast majority of food, medicines and other supplies are coming and going as normal.’

And he confirmed more than 500,000 people have now had their first injections of the vaccine.

But as another 215 people were confirmed dead yesterday — and 33,364 new cases revealed — chief scientific adviser Sir Patrick Vallance warned lockdown restrictions were likely to get worse before they get better.

He said research confirmed the new strain was 70 per cent more infectious than normal, adding: ‘The new variant is spread around the country. It’s localised in some places but we know there are cases everywhere.’ It has been linked to the surge of cases which led to Saturday’s tougher Tier 4 restrictions across London and much of the South-East, and saw five days of Christmas easing across the rest of England cut to one.

Standing beside Mr Johnson at a Downing Street briefing, he added: ‘The tier decisions are not ones for me but it is likely that measures will have to increase in due course — not reduce.’

Health bosses in Greater Manchester and the West Midlands urged residents to turn away any visitors from Tier 4 or insist they self-isolate for ten days.

They said: ‘Although our region is not in Tier 4, rates are increasing and it is highly likely the variant is circulating.’

Elizabeth de Jong, of Logistics UK, said: ‘It’s such a hard time with the changes in tiers, the difficulty planning for Christmas, the impact of Covid and not really knowing if we can continue to operate in Europe from January 1.’

The day of chaos knocked £50billion off the value of the FTSE-100 and the pound dropped nearly two per cent against the dollar.

We’ve been banned by…

■ France imposed an inbound travel ban from 11pm on Sunday.

■ Spain has banned all entries from the UK except for Spanish nationals and residents from today.

■ Italy blocked all flights from the UK until January 6.

■ Bulgaria suspended flights from the UK until January 31.

■ Netherlands banned all passenger flights from the UK until January 1.

■ Lithuania, Latvia and Estonia banned flights from the UK until January 31.

■ Denmark suspended all flights from Britain for 48 hours yesterday morning.

■ Norway stopped planes from the UK for two days.

■ Belgium halted flights and trains from the UK from midnight on Sunday for at least 24 hours.

■ Greece extended its quarantine period for travellers from the UK from three days to seven.

■ Portugal said only Portuguese people and residents can arrive from the UK.

■ In Ireland, flights arriving from Britain were banned for 48 hours at least from midnight on Sunday, and people have been asked not to ‘travel to Ireland, by air or sea’.

■ Turkey has temporarily banned all flights from the UK.

■ Canada suspended entry of all flights from the UK for 72 hours.

■ Russia is suspending flights from the UK for one week.

■ India is suspending flights from the UK from midnight tonight until December 31.

■ Saudi Arabia has suspended all international flights for one week while Jordan suspended flights from the UK for two weeks.

■ The Czech Republic said arrivals who have spent at least 24 hours in UK territory will need to isolate. 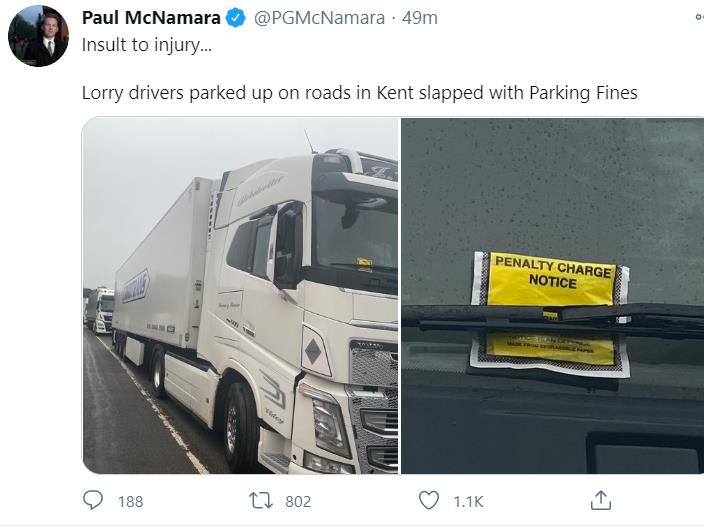 SOME lorry drivers gridlocked in Kent yesterday were handed parking tickets as they stopped on the roadside. Channel 4 reporter Paul McNamara tweeted: ‘Insult to injury… Lorry drivers in Kent slapped with Parking Fines.’ It was unclear who issued the tickets. Canterbury council denied it was them. Folkestone council did not comment.