LABOUR has dubbed the chancellor’s boast that his Budget marked the biggest government investment in Britain since the 1950s ‘smoke and mirrors’.

Jeremy Corbyn insisted Rishi Sunak’s spending plans would not ‘come close’ to repairing the damage done by ten years of austerity. And he called a government vow to ‘level up’ the country a ‘cruel joke’.

The opposition leader also said the Covid-19 outbreak had exposed the vulnerabilities of social services and warned money pledged to the NHS was ‘too little, too late’. ‘We are going into this crisis with our public services on their knees,’ he added.

Ex-prime minister Theresa May urged the chancellor to show more ‘caution’, and former health secretary Jeremy Hunt said the failure to invest in social care was a ‘glaring omission’.

The Adam Smith Institute think-tank called the Budget ‘seriously concerning’, adding: ‘Spending like a drunken sailor will not create a thriving entrepreneurial economy.’ And the TUC said Mr Sunak had failed 2million workers who don’t qualify for sick pay.

Jonathan Geldart, of the Institute of Directors, said: ‘With coronavirus threatening a cashflow crunch, measures to cut costs and support loans to businesses are on the money.’

He added the measures would ‘buoy firms looking to weather Covid-19’s implications’.

Mike Cherry, of the Federation of Small Businesses, added: ‘This is a pro-small business Budget, which has delivered a high streets bonus and emergency steps to support firms through the outbreak.’ 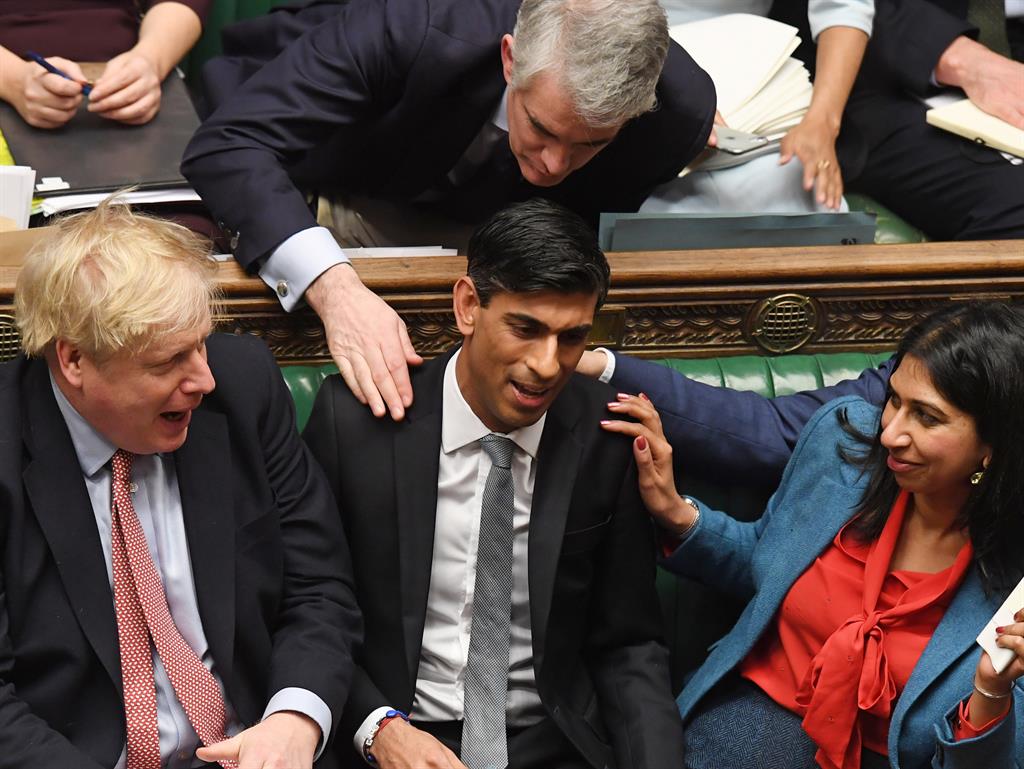 RISHI SUNAK cracked a couple of jokes in his Budget speech — with the first at his own expense.

The 39-year-old (above, being congratulated by his party colleagues) grinned as he noted his own promotion to chancellor last month in Boris Johnson’s first cabinet reshuffle after Sajid Javid quit.

Announcing Britain’s employment figures, he said: ‘Given the last few weeks I’ve had, I’m all in favour of jobs miracles.’

He also teased the shadow chancellor as he announced the abolition of VAT on digital books.

‘There will no VAT on historical fiction by Hilary Mantel, manuals and textbooks like Gray’s Anatomy or, indeed, works of fantasy, like John McDonnell’s ‘Economics for the Many,’ he said. In a further jibe at Mr McDonnell, over his interest in China’s former leader Mao Zedung, he added: ‘It’s sold so few copies it’s literally his own “Little Read Book”.’

Mr Sunak’s predecessor Philip Hammond had used his Budgets to try to shatter his reputation as a ‘Spreadsheet Phil’, packing his despatch box speeches with gags and one-liners.

These included asking Theresa May for some cough sweets, comparing Labour with driverless cars, accusing Jeremy Corbyn of disappearing down one of Stephen Hawking’s black holes, and recalling how previous Tory chancellor Lord Lamont was sacked within ten weeks of his 1992 Budget.