JENNIFER SAUNDERS has led a two-minute silence outside a West End theatre to draw attention to the ‘devastating’ effect of continued closures within the sector.

The Absolutely Fabulous star, 62, was joined by a collection of actors, comedians, theatre directors and singers outside the shuttered Gielgud Theatre in Shaftesbury Avenue, London.

Their ‘silent stand’ — the latest in a series featuring a range of industry figures — called for theatres to be allowed to reopen without social distancing and highlighted a perceived lack of government guidance on the issue. 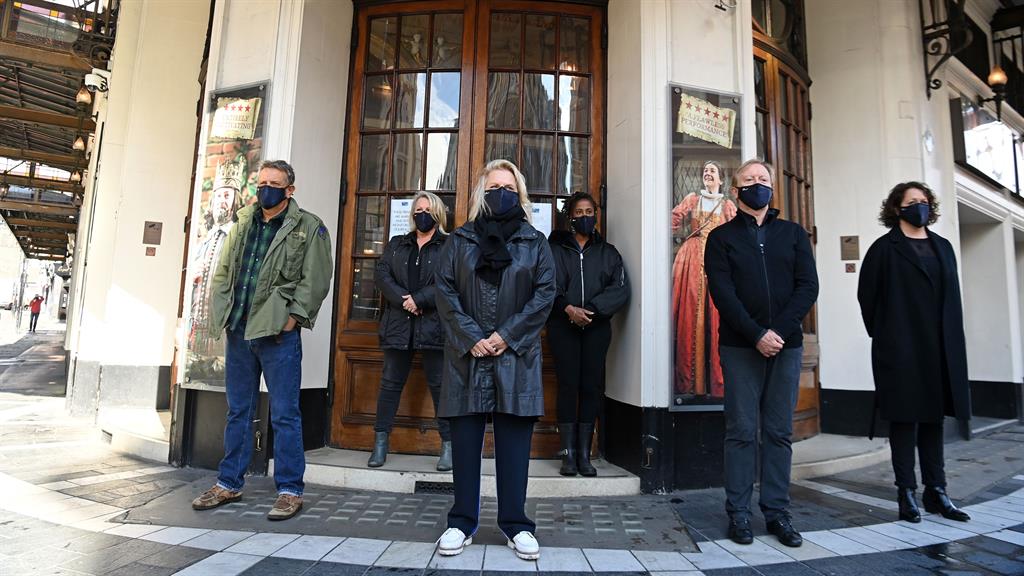 Saunders said: ‘We have been fairly well out of work. I was in the theatre when they closed so it was devastating for a huge amount of people because suddenly their income is gone overnight. And devastating for all the hospitality industry that operates around theatres and especially around the West End.

Explaining the motivation behind the protest, Saunders added: ‘We are here today to draw attention to the fact the theatres are still closed and it is incredibly damaging to the whole industry really, because it supports hundreds of thousands of people. Not just actors and producers but technicians and costumes, wigs.

‘It’s a massive industry, theatre in this country, and not just in London but all around the country. Every town and city has a theatre and if they are not going to be allowed to open because of restrictions then some support has to be given, some extra support especially as furlough is ending.

‘People need some clarity, I think. Why can you get on a plane but you can’t go and sit in the theatre? We are really here just to highlight it.’

She added: ‘Practically, it is very hard because to open something viably it costs a lot of money and you wont get the ticket receipts.

‘People are putting on one-person shows and that sort of thing. It’s very hard in these old theatres.

‘I know it could be done. I know Andrew Lloyd Webber has been very vocal about certain measures he has put in place that would make it possible to open to half-house or something like that.’

Last month, Nimax Theatres announced it will reopen all six of its West End venues from October for a season of socially distanced shows.

However, reduced audience numbers mean they will run at a loss.

The Gielgud Theatre is owned by the Delfont Mackintosh Theatres group.