A COUPLE who dreamed of living off grid in the capital have designed a pioneering solar-powered houseboat that could revolutionise Britain’s waterways.

The SunFlower is a stunning floating home which runs on renewable energy, produces zero emissions, collects rainwater from the roof and even composts its own waste. And without a noisy, fossil-fuel engine, it also respects wildlife by motoring down the river in virtual silence.

‘We have a history and love of being on the river and started to worry about the impact that traditional boat engines were having on the environment in terms of noise, fumes and pollution,’ says Hayley, 47. ‘Given the rapid advances in technology for electric cars and vehicles on our roads, we figured that there must be a more sustainable way to be on our rivers and canals, too. But there was nothing around. We realised there was a huge gap in the boating market for using renewable energy to help lead a sustainable way of life.’

Determined not to sacrifice style and comfort in pursuit of sustainability, Hayley and Ryan set about designing The SunFlower with 64 square metres of luxury living space.

On board the £250,000 vessel there is an open-plan kitchen and living room, two double bedrooms and a spacious wet room, complete with shower and full size bath. There is no skimping on mod cons as all the domestic appliances are powered by the sun, including the TV, dishwasher and washing machine. An eco boiler stove, burning 100 per cent renewable smokeless logs, powers the underfloor heating, and windows and doors are triple glazed with entry via a remote-controlled keypad.

South African born Ryan, 46, says he was shocked to discover there were no boats on the market that were fully sustainable, nor any engines that would work without using toxic fuels which are a hazard to both fish and wildlife.

‘Some boats had solar panels for domestic supply usage,’ he says. ‘But there were no alternatives that would allow a vessel to cruise and live on the river without needing fossil fuels.

‘When we decided to come up with a more eco-friendly engine, no one could tell us how to do it and no one seemed confident it could even be done. The focus seemed to be more about what happens on a cloudy day when there is no sun, and on the unpredictable British weather. I’m originally from South Africa so I think people thought I had lost the plot!’

But determined to find a way, Ryan researched various possible solutions and finally came up with a system he felt would work.

‘It didn’t stop the nagging doubt that everyone else might be right, and that I was wrong,’ he jokes.

First, they commissioned the build of a wide beam canal boat, adapting the design to be both contemporary in style and to accommodate the pioneering technology.

The 20m x 4m steel hull weighed in at 42 tonnes which included an 18-tonnes concrete thermal floor. First to be installed were 20 photovoltaic solar panels on the roof. Underfloor heating is provided by a network of water pipes leading to a 250-litre hot water cylinder. In winter the water is heated by the eco boiler stove. In the summer it’s heated by the solar panels.

Rainwater is collected from the roof and stored under the master bed. It is filtered and used for showering, bathing, dishes and laundry. A waterless composting toilet from Sweden negates the need for chemicals or a pump-out toilet.

The boat is mechanically ventilated and the walls and ceiling have 70mm foam insulation (almost triple that of most steel hull boats) to keep it warmer in winter and cooler in the summer.

Ryan says: ‘With a top cruising speed of just three knots, she’s not the fastest on the river. But she is non-polluting and slips almost silently through the water at a relaxed pace. We considered heat efficiency in winter to be more important than speed.’ 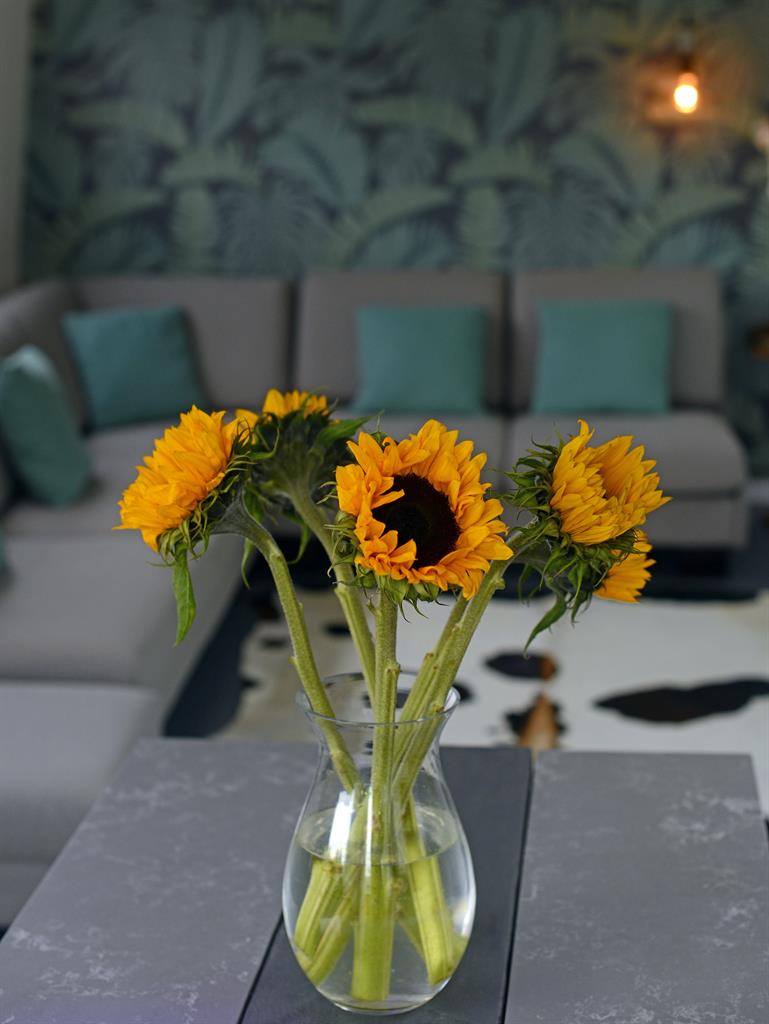 Hayley adds: ‘While Ryan took charge of the build and technology, it was my job to create an inside space that felt more like a home than a boat. I wanted it to be contemporary, with minimal style and clever, flexible storage solutions. The wine cellar sunk into the concrete floor is not only a space saver, but also a great feature and a real surprise for visitors. We added a Perspex panel above it so we can see it from the living room.’

Inside is a stunning open-plan living space, with a state-of-the-art fully fitted kitchen and a movable island that converts to a breakfast bar and can change the shape of the kitchen.

The large, modular corner sofa can be separated and reconfigured to provide seating for the dining table or can also be used as a double bed.There are two double bedrooms with ample storage. A pull-out desk transforms the second bedroom into an office. A raised bed in the master bedroom accommodates the water tank underneath and offers unrivalled river views onto a secluded deck.

The spacious wet room with shower and full-length bath has a mirrored wall to enhance the sense of space. And pocket doors slide into walls in all the rooms. The abstract inset shelving in the passageway cleverly uses every inch of spare space and offers ample storage for books, artwork and knick-knacks.

And to maximise the stunning river views, there are three exterior entertaining areas. The front deck with built-in seating, the sun deck behind the solar panels on the roof and the large wraparound seating area at the rear.

Ryan adds: ‘People often ask if The SunFlower is really fully solar powered. And we are thrilled to be able to tell them that she is! She is a prototype and demonstrates that it is now possible to live on the river using only renewable energy. It’s not only kind to the environment, but it’s also a very affordable way to live.

‘We’ve received so much interest we’re now planning to build more to order. So hopefully soon The Sunflower will be the first of many fully sustainable houseboats motoring on Britain’s waterways.’

■ For further information check out thamessolarelectric.co.uk 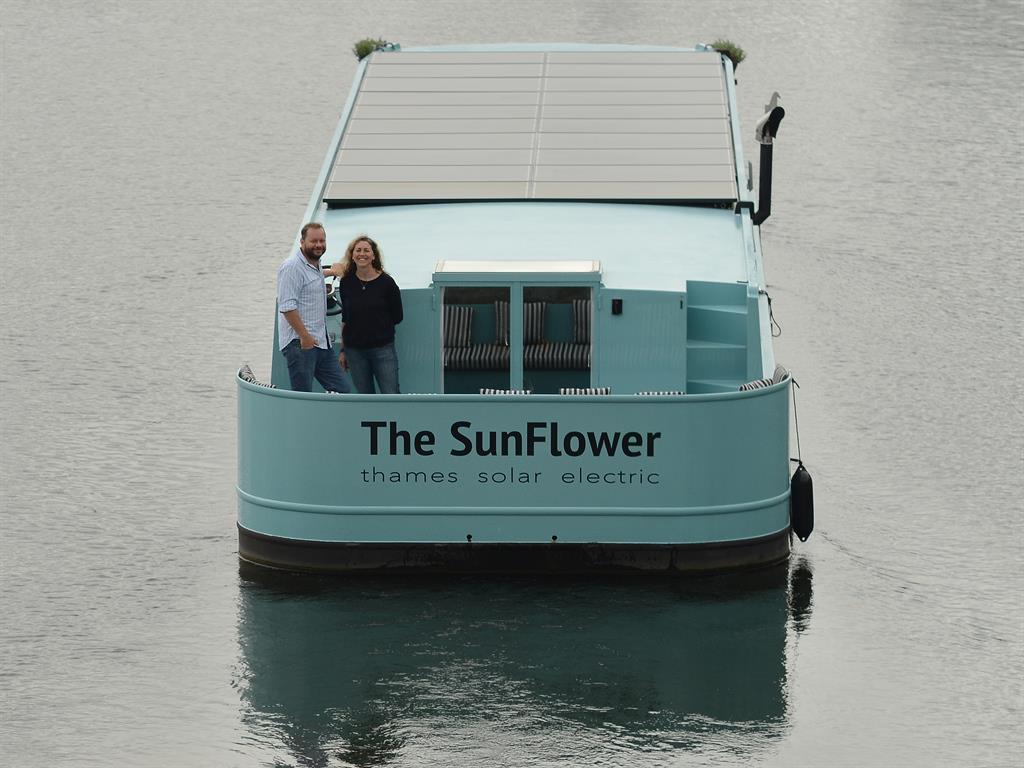 ■ The SunFlower needs 5KW a day to run the domestic supply, so just one hour of full sun produces more than the boat’s daily domestic needs.

■ A battery bank, made up of 48x2volt cells was fitted to power the two custom-built electric Lynch motors, which enable the boat to cruise for up to 10 hours.

■ When the engine is not in use, the battery bank will power the domestic supply for 18 days without needing any sun or even daylight.