THE crew held captive inside the British-flagged tanker seized by Iran in the Gulf have been pictured for the first time since armed soldiers took control.

Video footage and a photo released by Iranian authorities appear to show cooks preparing meals and crew members being briefed by an Iranian official onboard the Stena Impero. 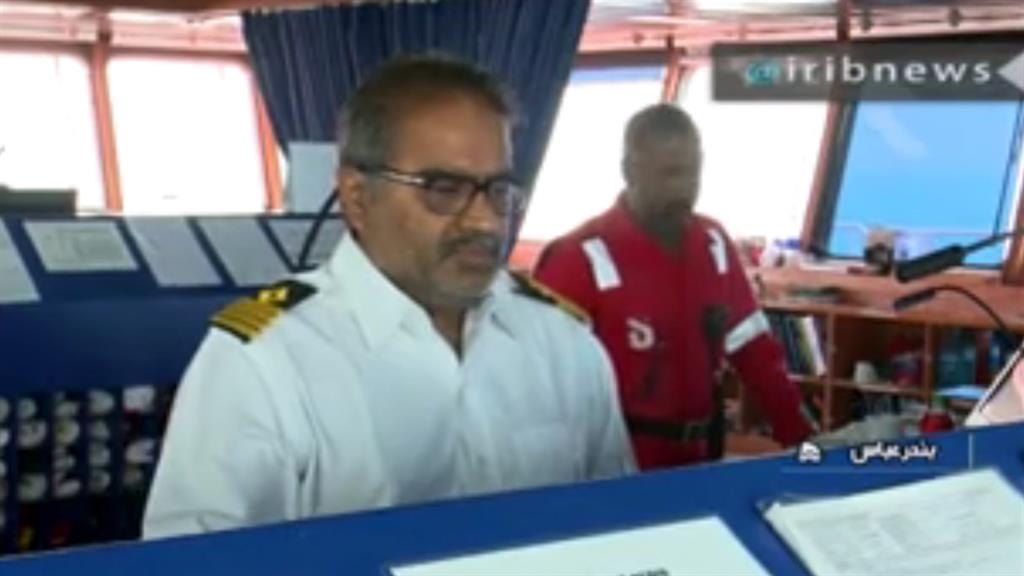 Meanwhile, Theresa May, senior ministers and security chiefs met earlier today to discuss the UK’s response to the Gulf crisis.

Downing Street has been hit by claims that the government ‘dropped the ball’ by failing to prepare for Tehran’s actions against British shipping in the Strait of Hormuz.

The prime minister chaired a meeting of the government’s emergency committee Cobra to consider how to react to the capture of the Stena Impero on Friday.

The PM’s official spokesman said: ‘We do not seek confrontation with Iran but it is unacceptable and highly escalatory to seize a ship going about legitimate business through internationally recognised shipping lanes.’

The spokesman said the ship was seized under ‘false and illegal pretences and the Iranians should release it and its crew immediately’.

Military experts have warned that cuts to the Royal Navy had left it over-stretched, with too few warships to protect British interests.

The prime minister’s spokesman added: ‘The high volume of ships moving through the Strait of Hormuz — up to 30 ships covering more than 100 nautical miles — makes it impossible to escort vessels individually.

‘We already work closely with international partners to ensure a co-ordinated effort to defend freedom of navigation, this includes sharing information on threats to shipping and offering mutual protection for each other’s vessels.’

Downing Street said there had not been a US offer to escort all UK ships in the region.

But the spokesman said: ‘The US has been discussing with a number of countries, including the UK, how we might deliver maritime security in the face of recent threats to shipping.’

US secretary of state Mike Pompeo told Fox News: ‘The responsibility… falls to the United Kingdom to take care of their ships.’

Foreign secretary Jeremy Hunt will update the Commons on the situation this afternoon, amid reports that ministers are considering freezing Iranian regime assets.

Frigate HMS Montrose is on duty in the Gulf but was unable to prevent the seizure of the Stena Impero.

Defence minister Tobias Ellwood, speaking on ITV’s Good Morning Britain today, said: ‘There is much criticism about the Navy, about HMS Montrose not getting to there on time — I should actually point out that the USA have five or six warships in the region, including an aircraft carrier, and in the middle of June two of their tankers were attacked, one of them set ablaze.

‘So, this is something that affects us all, it requires international co-operation, but also, most importantly, recognition that there’s a bigger geostrategic challenge facing [us] here — that is the reason why Iran is doing those things.’

Mr Ellwood continued his calls for more funding and investment for the armed forces in the face of more ‘diverse and complex threats’ and said the Iranian issue is an example.

‘There is no doubt that the size of the Navy since 2005 — reduced from 31 frigates and destroyers to now 19 — has had an impact on our ability to protect our interests around the globe,’ he told BBC Radio 4’s Today programme.

‘I credit the politicians for acknowledging this now but it should have been acknowledged and pressed earlier.’

Chancellor Philip Hammond’s parliamentary aide, Huw Merriman, told Today that the government has ‘dropped the ball’ over the situation.

He said: ‘We did not put in place a chain where we asked all of our vessels to leave at a certain time under convoy, so it was hardly a surprise when one of ours got taken.’

■ IRAN said it has arrested 17 people allegedly recruited by the US Central Intelligence Agency (CIA) to spy on the country’s nuclear and military sites.

Intelligence chiefs said some of 17, who were all Iranian nationals, have already been sentenced to death.

An official told a press conference in Tehran that the arrests had occurred over the past few months.

He did not say how many of those arrested had received a death sentence.

The official was identified as the director of the counter-espionage department of Iran’s intelligence ministry.