A WOMAN who travelled for three hours to see a man she met on Tinder claims she was called fat and dumped when she turned up for their date.

She travelled 40 miles from her home in Syston, Leicestershire, to Peterborough to meet her date — but when he saw her he said she had ‘put weight on’, since their last meeting a month ago. 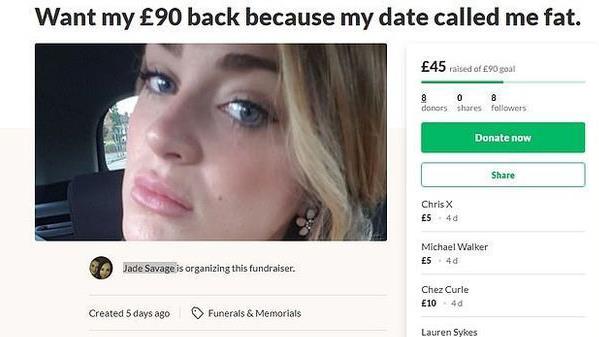 ‘I was like, “You can’t say that.” It was clear he wanted to call the whole thing off,’ said the mum-of-one.

Ms Savage, 28, was already having a bad time getting to the rendezvous. She had missed her coach, so caught a train to Peterborough. After being dumped she spent £5 on wine to drown her sorrows then set up her fundraising page to buy ‘wine and sticks of lard’.

But she had the last laugh as pledges poured in last night. One donor said her date was ‘a fool’ while another pledged cash to her ‘next, hopefully better date’.

Jade told The Sun: ‘I see the funny side, that’s why I set up the page. It’s got me my money back, which obviously I’m very grateful for.’