THEY are picture-perfect pieces of history – tiny, two-up, two-down workers’ cottages found in towns and cities across Britain.

But while small might be beautiful, adapting these late 19th-century houses for modern living can present considerable challenges. In Ealing, West London, however, a creative makeover by architect Matt Keeler of KSKa (‘we don’t do ordinary’) has delivered breathtaking results. It’s less a renovation than a reincarnation, demonstrating how limited space can be made to work efficiently in a very contemporary way.

‘We call this renovation the Swiss Watch,’ Matt says. ‘Because it’s beautifully detailed and full of surprises.’ From the outside, this 1885 three-bedroom terraced house, owned by Edward and Michelle since 2011, looks no different from its neighbours.

But inside, while the original fireplace still adorns the front living room, it’s full of ingenious surprises. An engineered-oak chevron parquet floor, with underfloor heating, adds to the sense of modernity. The stairs, with their minimal glass balustrade, have been relocated to add to the feeling of space. 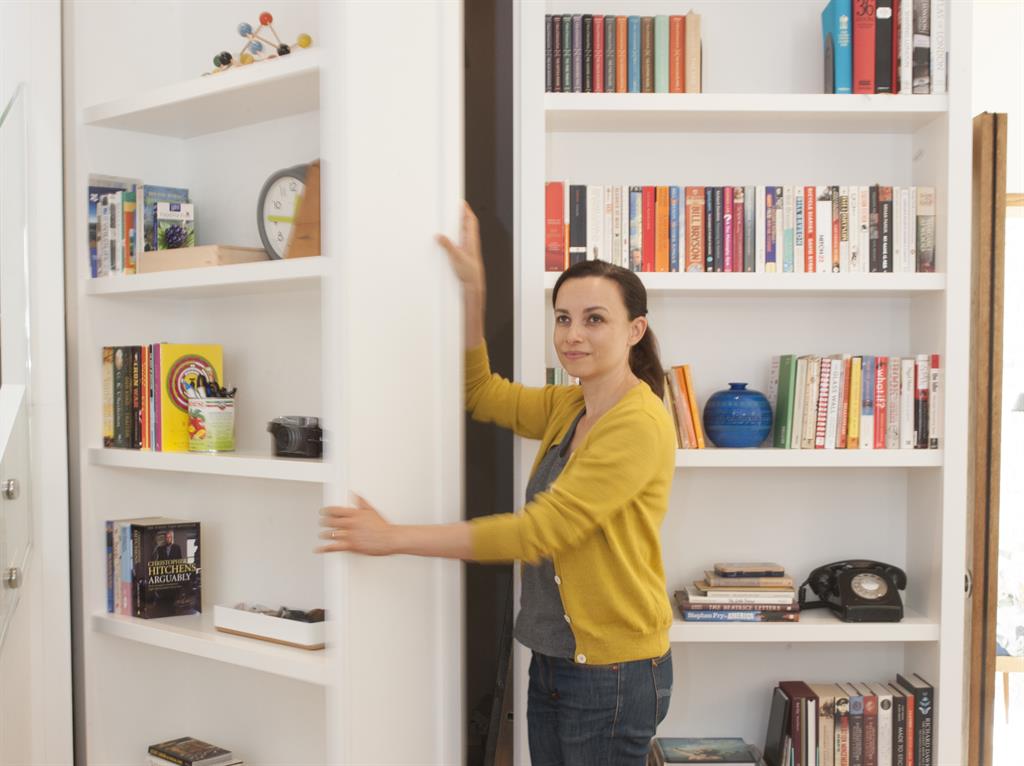 Go beyond, and you enter a world of light. Once a dated kitchen/clumsy conservatory, tacked on in the 1970s, it has been transformed into a 20ft-long, frameless glass kitchen/dining extension.

The access from the living room – as well as the exit to the patio garden – is through two super-sized oak-framed glass pivot doors. The seamless flow-through design gives the pocket-sized patio garden grandiose proportions.

The brick party wall with neighbours, who also built an extension, has been left exposed and studded with three up-lights to give an industrial feel. It’s an elegant theme, which continues with the polished concrete work surfaces in the Shaker-style kitchen.

In one corner of the room, a cantilevered frameless glass ‘snug’ offers a place to sit and reflect, even on a bleak winters’ day. Most of the time, however, the south-facing space is flooded with light, and therein lay one of the problems.

‘We needed high-performance solar glass to cut out most of the rays,’ Matt, the architect, explains. ‘Otherwise we would have been creating a hothouse. We’ve cut out 70 per cent of the solar rays – and at night time the extension feels like it’s doubled in length.’

Another challenge was splitting the original bathroom upstairs into a more modern version and a funky study.

‘When we bought the house the estate agent described it as ‘‘a luxuriously large bathroom’’ – but we didn’t need a luxury bathroom – we needed a study,’ says Edward, who works for a web security company.

The solution was to reconfigure the staircase and a former landing – with a small and disjoined set of stairs – to allow for a spacious study. The double height ceiling (created by going into the loft) and the skylight were strokes of genius.

Even though the new bathroom is smaller, it’s flooded with light. Michelle and Edward have continued the chevron theme with elegant slim black wall tiles and oak-effect porcelain floor tiles.

‘We did struggle with fitting the full-sized bath,’ Matt concedes. ‘It’s a particularly skinny wing. Most people said: ‘‘You’ll never get a bath in there,’’ but we did.’

The answer was to install a sliding fire door, rather than a wall with a conventional door, which squeezed vital extra inches into the small space.

‘We’re really pleased with the house – I wish it was mine,’ Matt laughs. ‘The moment I visited Edward and Michelle, I knew we would be a good fit. Their beautifully chosen furniture and pieces showed they cared about aesthetics and detail as much as I do.’

Edward and Michelle (a digital operations manager) spoke to four architects before they settled on Matt and KSKa.

‘We sourced a lot of the materials ourselves – the geometric wall tiles in the kitchen, which we’d first seen in a restaurant in San Fransisco, were particularly tricky,’ says Michelle, who with Edward, crammed in untold hours watching TV property renovation programmes and doing online research to find the products they wanted.

‘We had a lot of the ideas – but Matt was so brilliant at finding ways to realise them and create the illusion of extra space,’ she says.

‘The project took six months, but the total cost was less than moving and we ended up with everything we could possibly have wanted.

‘We liked the house before. But now we love it. I think the greatest delight is the kitchen. Edward is a really good cook. I like to sit in the glass bay and watch him cook.

‘The footprint of the cottage hasn’t changed at all. But the increased sense of space and all the extra light is just brilliant.’

■ This property features in Open House London, from September 16-17. The annual celebration of the capital’s architecture offers access to about 800 venues not normally open to the public, including government buildings, private homes and historic sites, kska.co.uk; openhouselondon.open-city.org.uk