DUGGIE FIELDS has been an active member of the British art scene for more than five decades. An instantly recognisable figure with his trademark sharp suits, black quiff and cartoon shades, his appearance every bit embodies his post-pop art masterpieces.

The apartment he has rented for the past 50 years is not just his home — it’s a living landscape of his eclectic life and colourful career.

From the giant canvases that hang on the walls and humanised mannequins occupying the rooms to the humorous ‘accidental feature’ made after a roof leak, Duggie sees the art in everything.

He says the flat’s evolution keeps him creative — and his interiors interesting.

‘If you don’t exert yourself over your surroundings then they crash in on you. I have lived with lots of decay over the years with floods and the odd torrential downpour. But even decay creates something new,’ Duggie tells us. 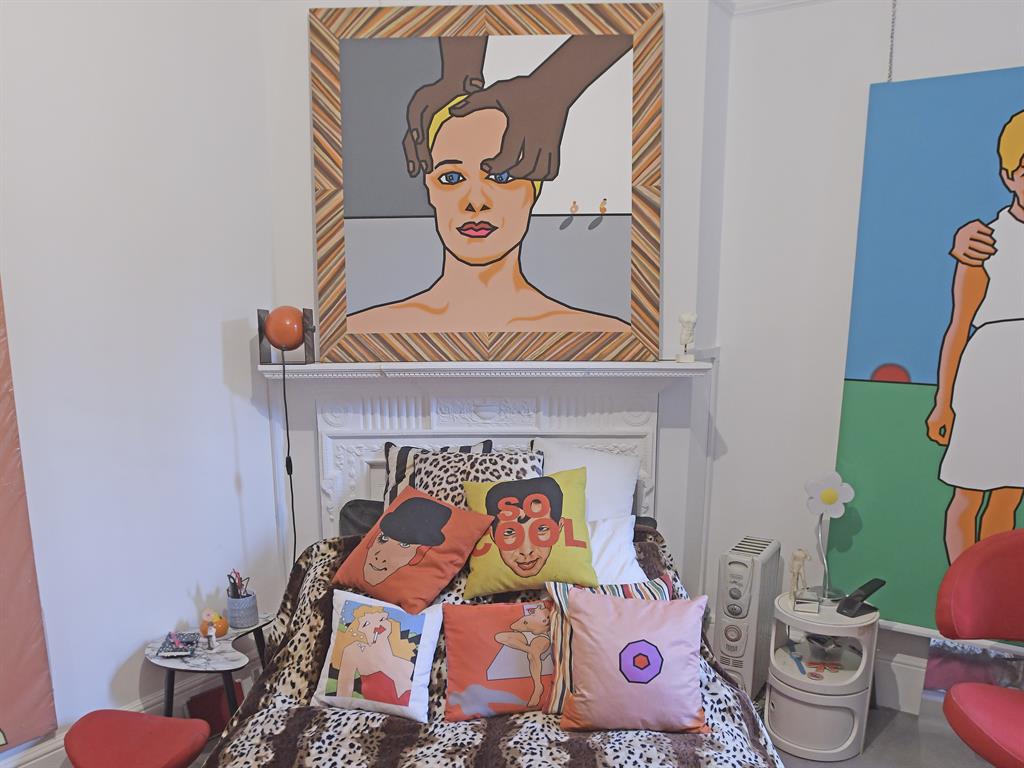 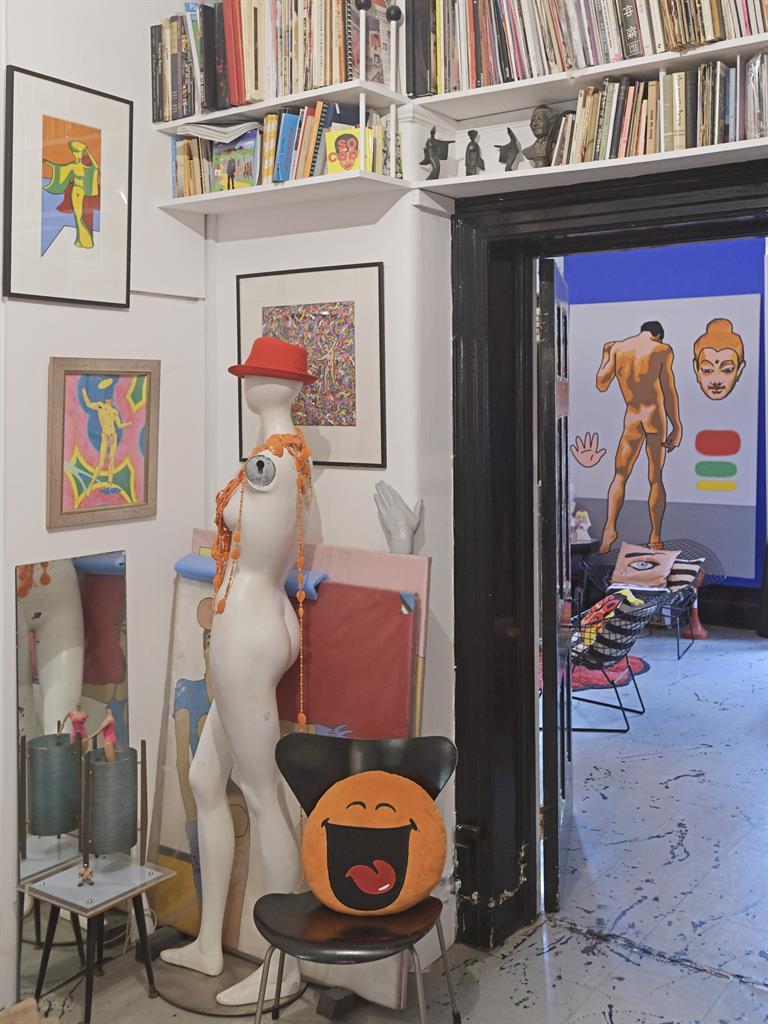 ‘When I first moved here I was 23-years-old. It was empty, with bare floorboards — I moved in with nothing and no money and I couldn’t help but personalise the space.’

Duggie moved in with two friends — one of which was Syd Barrett, the co-founder of Pink Floyd. Duggie’s painting of Syd was exhibited at the V&A. 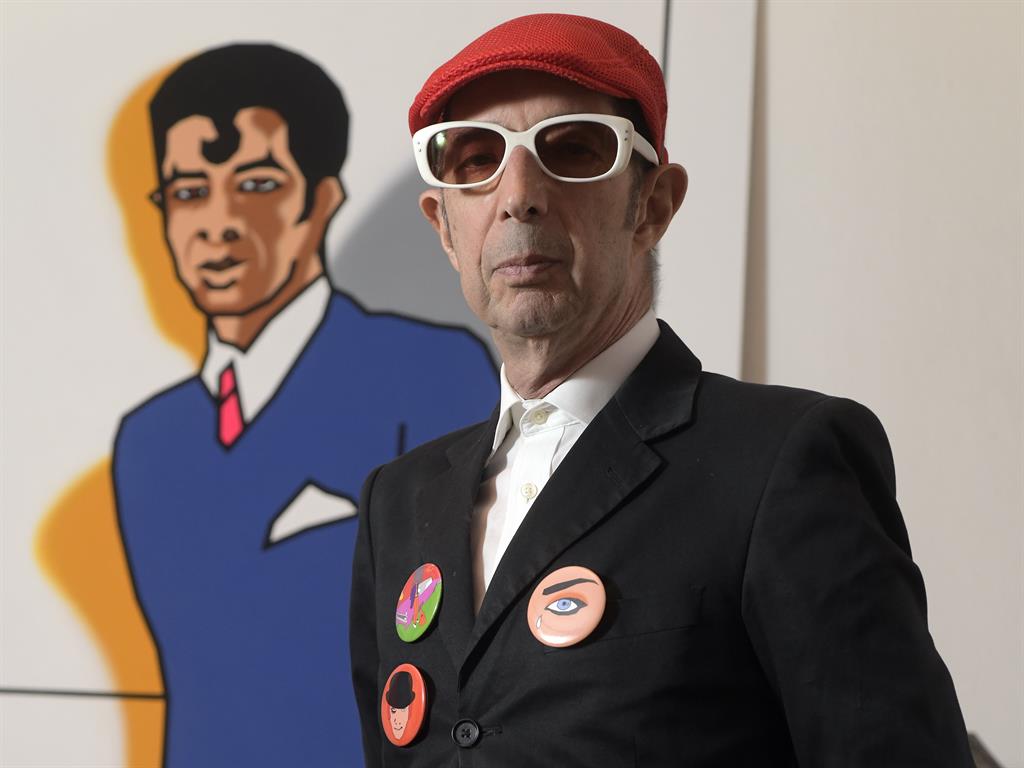 ‘I didn’t know then that it was not going to be a temporary space. At one point I felt trapped because I didn’t own it. But I’ve had various landlords down the years, most of whom have shown complete disinterest. Largely I’m left alone, which is how I like it.

‘Now I am extremely grateful. Where would I find anywhere as amazing as this to live? And to work? It has been a wonderful place to paint.’

When you enter the apartment, in a genteel mansion block in London’s Earl’s Court, it’s like walking into one of Duggie’s pop art videos. Little wonder that last year it was recreated for the Glasgow International art biennial. ‘It was very surreal, very Alice In Wonderland,’ he says. 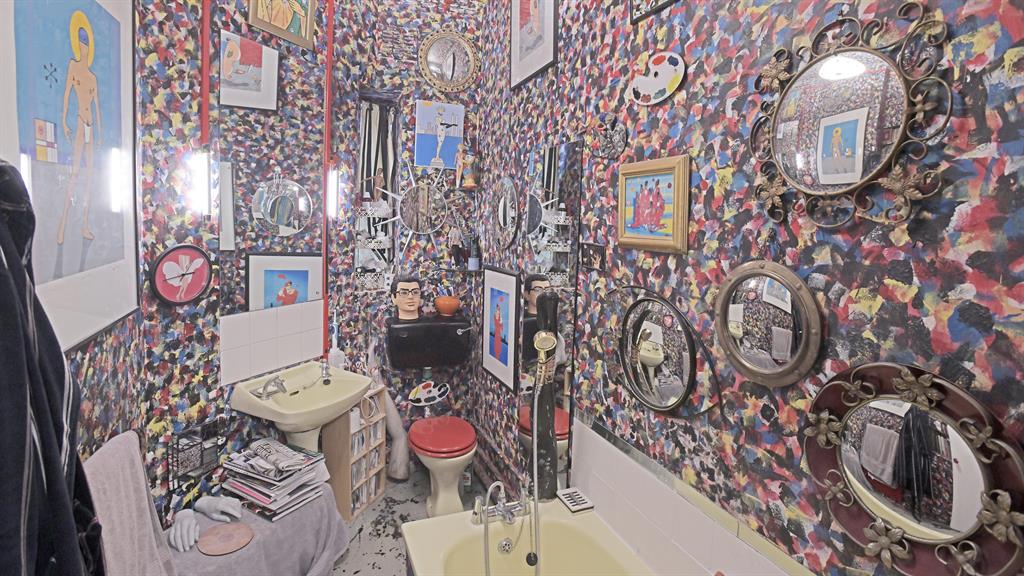 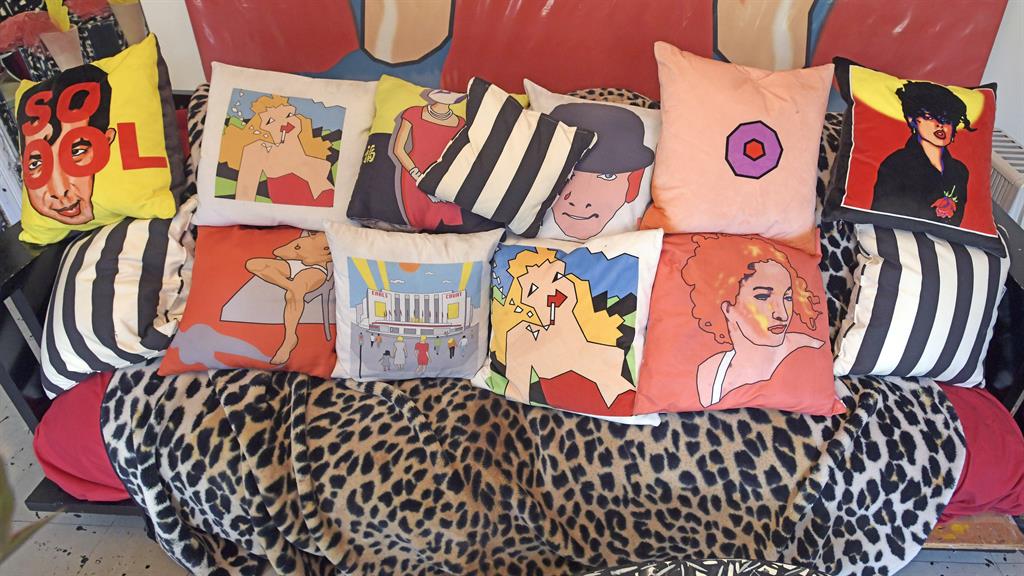 The flat is filled with his eye-catching work — from the double bed coming out of the fireplace and plastic limbs growing in plant pots to pop art swivel chairs (below). 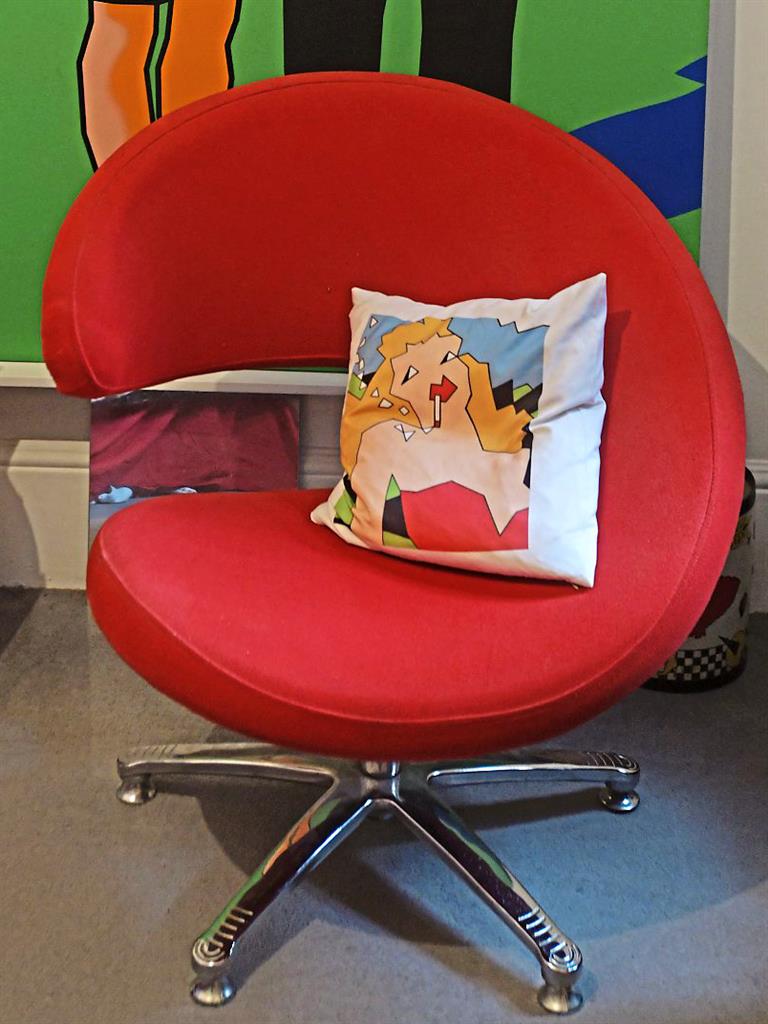 Duggie may be 74, but no one can accuse him of not moving with the times. He has just released a single to address the divisive effect Brexit is having on British society. ‘It’s called Boom. It’s so important now to realise that we need to coexist with people with different views,’ he says.

Apart from the two painted murals in the living room, all walls are white.

‘The paintings add the colour. I love mirrors but I didn’t want to lose wall space for my paintings. So I use mirrors on the backs of every door instead. It allows you to see the room from some rather interesting angles. You don’t know if you are looking through it or at it.

‘The hallway had no view and was slightly claustrophobic so I added mirrors — and now you can see the green trees outside through the windows. ‘You have to constantly freshen up — I have kept the black vinyl floor tiles but that changes, too, depending on what I am painting.

‘I might live amongst my work, but there are things I won’t notice for a long time. I will suddenly see something again, but differently. I go on and off everything — it depends on my emotional state.’

The mannequins are a huge theme of Duggie’s work. His parents owned a shop and he used to hang out with his brother and the other local shop owners’ kids in the storage rooms.

‘When I acquire the mannequins most of them are faceless and sexless, but I add nipples and pubic hair to give them personality.

‘Believe it or not, it used to be so minimal but I’ve been here so long I’ve acquired a lot of things,’ he laughs.

There’s a huge painting of the now-demolished Earl’s Court Exhibition Centre and Duggie is part of the campaign to use the land as a green space. (‘Earl’s Court is the most polluted area in London,’ he says.) Vintage plastic dolls and body parts that randomly pop out of plants pots (below) are from car boot and jumble sales. ‘They have no value but spice the space up. I don’t plan things or want anything to look perfect. They just work.’ 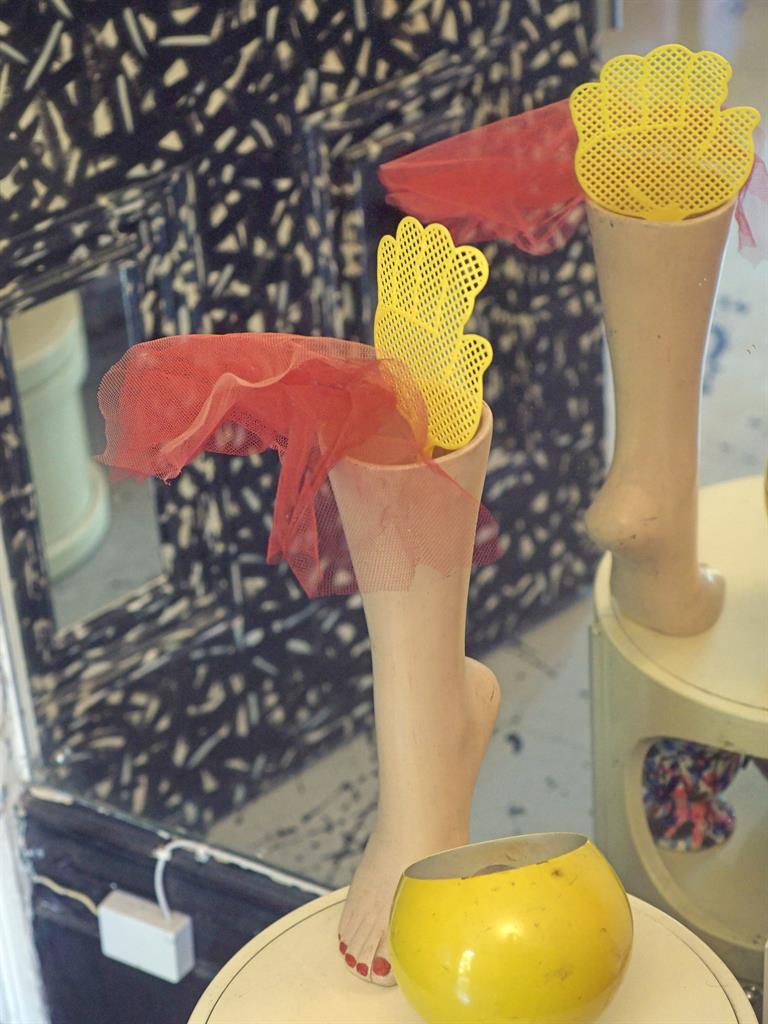 The bedroom fireplace serves as the headboard for his bed and there’s a huge painting of his parents, from a photo taken in the 1960s, on the wall.

Paint palettes are another major theme, forming many light fittings.

The breath-taking bathroom took Duggie four days to paint with sponges. ‘Zandra Rhodes had a painting party in the late-1970s and I thought I’d try that in here.’

A mannequin leg holds up the shower over the bath. ‘I love to crowd small spaces and empty out big spaces. Lots of mirrors in here add depth — but also confusion, so you are seeing everything from a different angle.

‘Nothing in my house is of intrinsic value, apart from my work. Everything else is old and repurposed. But when I change it around, paint another canvas or add something that interests me I’ve found in a charity shop, it breathes new life into the place.’