THERESA MAY has claimed that future historians will accuse MPs of failing the British people unless they back her in tonight’s momentous Brexit vote.

The prime minister (pictured) issued the warning yesterday in the Commons after racing back to London from a factory in Stoke, where she defended the deal she has agreed with the EU in a speech to workers.

Her 11th-hour bid to convince MPs continued with a plea to Tories at a private meeting last night. But dozens are tipped to join opposition parties in defying her, with some sources saying she could lose by 200 votes.

Tory assistant whip Gareth Johnson, tasked with bringing rebels into line, quit yesterday as he opposes the deal himself.

Brussels tried to help the PM by issuing a letter that stressed the unpopular ‘Irish backstop’ is only intended as a temporary measure. But the letter also said the deal cannot be fundamentally altered.

In her speech to the Commons, Mrs May urged: ‘Give this deal a second look. No, it is not perfect. But when the history books are written, people will look at the decision of this House tomorrow and ask — did we deliver on the country’s vote to leave the EU?

‘Did we safeguard our economy, our security and our Union? Or did we let the British people down?’ Despite her stance that Brexit must be delivered, the prime minister repeatedly refused to rule out delaying it, saying instead that she ‘believed’ and ‘wanted’ Britain to leave on March 29 as planned.

Jeremy Corbyn replied to her history books warning by saying tonight’s vote should have gone ahead last month and nothing had altered since she postponed it to give herself time to change MPs’ minds.

‘During the past two years of these shambolic negotiations she has failed to listen,’ said the Labour leader. ‘She hasn’t once tried to work with parliament to construct a deal this House and the country can support. And now she is left facing a humiliating defeat. She is blaming everybody but herself.’

Mrs May has refused to reveal what she will do next if her anticipated defeat is confirmed when the result of the vote is revealed at about 9pm or 10pm. But some MPs have called for Brexit to be delayed while a way forward is found, or for a second referendum to be held.

MPs will also vote tonight on a series of amendments to Mrs May’s plans put forward by her critics — and further parliamentary manoeuvres will follow if she does fail to win the day.

Tory former ministers Nick Boles, Sir Oliver Letwin and Nicky Morgan, who will all vote for the deal, have drafted a Bill designed to stop a no-deal exit.

If backed by the House, it would give the PM three weeks to get a compromise through the Commons. If she failed, the Liaison Committee of senior backbenchers would be tasked with coming up with its own compromise, which the government would be bound to take forward if the House voted for it.

As if Mrs May didn’t have enough on her plate, there was a row yesterday when Treasury ministry Mel Stride was spotted leaving No.10 with notes saying: ‘No food. No Channel tunnel.’

The Scottish first minister Nicola Sturgeon suggested the words were exposed on purpose to scare people over the risk of no-deal. But sources close to Mr Stride said he had just listed concerns being publicly debated that he intended to raise at a meeting. 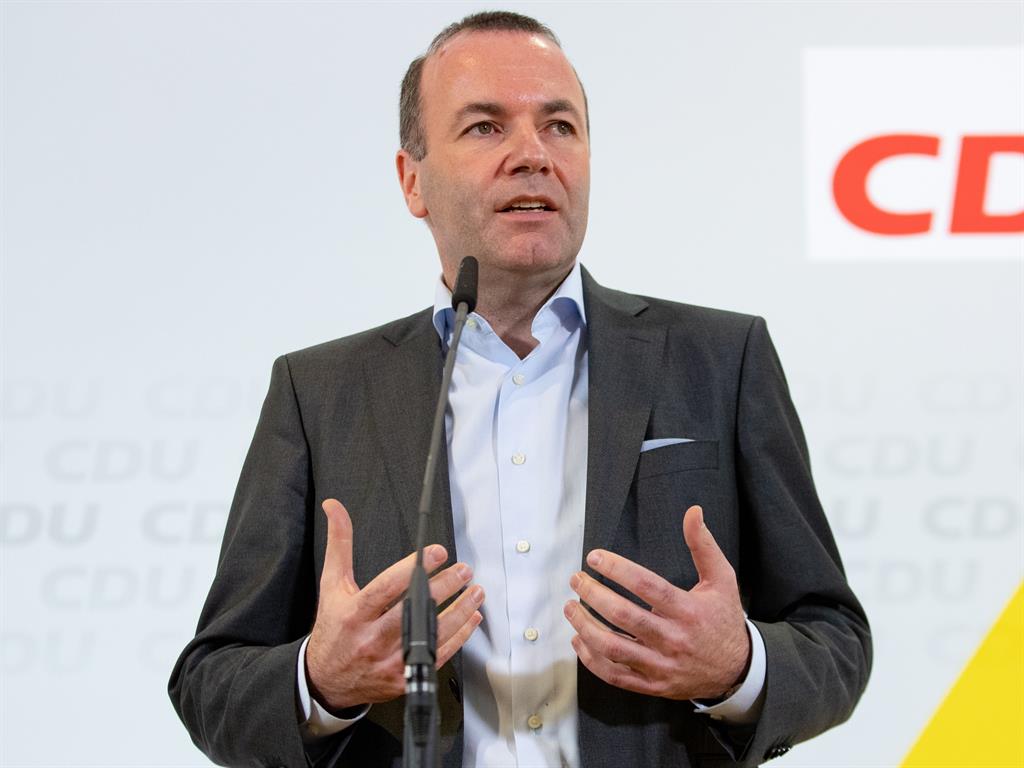 A GERMAN politician vying to replace Jean-Claude Juncker in charge of the European Commission has urged MPs to back Theresa May’s Brexit deal.

Manfred Weber (pictured) said the deal had taken two years to thrash out, adding: ‘We ask, we invite our British colleagues to behave responsibly and vote for this agreement.’

Mr Weber, the preferred candidate for the European People’s Party, will stand in elections in May to take over from Mr Juncker, whose five-year term ends in October.