RAPIST movie mogul Harvey Weinstein was behind bars last night — facing up to 29 years in prison for sex crimes.

The disgraced Hollywood producer was remanded in custody after a jury unanimously found him guilty of two attacks on women — rape in the third degree and a criminal sexual assault.

The verdicts were welcomed by #MeToo campaigners as a vindication of women who spoke out against the multi-millionaire.

And prosecutors hailed ‘a new landscape for survivors of sexual assault’.

Manhattan district attorney Cyrus Vance said the ‘heroic’ eight women who gave evidence against Weinstein, 67, had ‘changed the course of history in the fight against sexual violence’.

‘These are eight women who pulled our justice system into the 21st century by declaring that rape is rape and sexual assault is sexual assault, no matter what,’ Mr Vance said. ‘Rape is rape whether committed by a stranger in a dark alley or by an intimate partner in a working relationship.’

Weinstein faces up to 25 years for the criminal sexual assault — a first degree offence in the New York system — of production assistant Miriam Haley in 2006. The third degree rape of actress Jessica Mann in 2013 could earn him another four years. 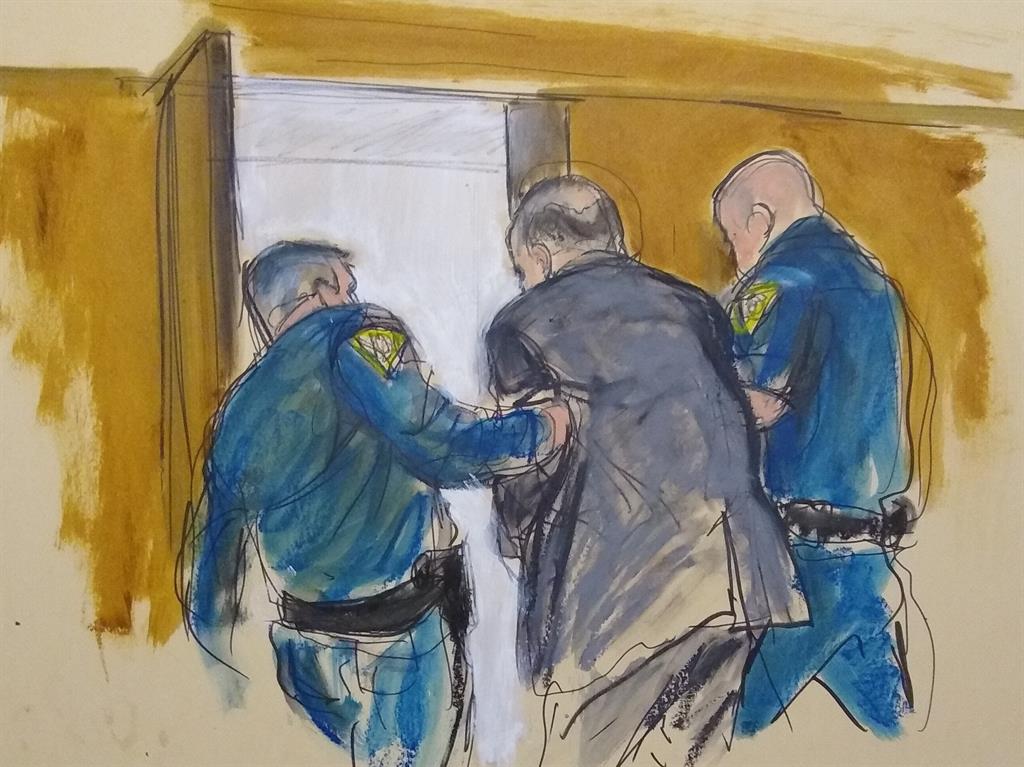 The mogul will be sentenced on March 11 but was handcuffed and put behind bars for the first time after the jury’s guilty verdicts, which followed five days of deliberations. Surrounded by court officers, he was led away without the use of the walking frame he had relied on for much of the trial, and taken to Rikers Island jail.

The Miramax founder was cleared of three more charges — two of predatory sexual assault and one of rape in the first degree. But he faces a further trial in Los Angeles, accused of raping one woman during Oscars week in 2013 and sexually assaulting another the following night.

Dozens of women, including actresses Gwyneth Paltrow, Uma Thurman and Salma Hayek, have told of being attacked or harassed by Weinstein. He is said to have carried out multiple rapes — some too long ago for charges to be brought — and to have demanded sex in exchange for helping to boost women’s careers.

Yesterday’s verdicts complete the downfall of the film boss, who produced Oscar winners Pulp Fiction, Good Will Hunting and Shakespeare In Love but saw his reputation ruined by the flood of allegations against him.

Mr Vance described him as ‘a vicious, serial sexual predator who used his power to threaten, rape, assault and trick, humiliate and silence his victims’.

He added: ‘This is the new landscape for survivors of sexual assault in America, I believe, and it is a new day — it is a new day because Harvey Weinstein has finally been held accountable for crimes he committed.’

Ms Haley’s lawyer Gloria Allred said outside court: ‘It’s no longer business as usual in the United States. This is the age of empowerment of women and you cannot intimidate them anymore — women will not be silenced.’

Tarana Burke, founder of the #MeToo movement, said: ‘Harvey Weinstein operated with impunity and without remorse for decades in Hollywood. Yet it still took years, and millions of voices raised, for one man to be held accountable by the justice system. This case reminds us that sexual violence thrives on unchecked power and privilege.’

One of Weinstein’s earliest accusers, actress Ashley Judd, tweeted: ‘For the women who testified in this case, and walked through traumatic hell, you did a public service to girls and women everywhere, thank you.’

Actress Mira Sorvino, who also accused Weinstein of sexual harassment and of derailing her career, wrote: ‘The beginning of #justice. More to come, my sisters.’ The guilty verdicts were welcomed by the Time’s Up Foundation, which campaigns against workplace sexual misconduct.

Tina Tchen, the group’s president and CEO, said: ‘The jury’s decision marks a new era of justice. It sends a powerful message to the world. While we celebrate this historic moment, our fight to fix the broken system that has allowed serial abusers like Harvey Weinstein to abuse women in the first place continues.

‘Abusers everywhere and the powerful forces that protect them should be on notice: There’s no going back.’