IT’S been a busy year or so for Grace Petrie. The Leicester-born folk singer is enjoying a rare few days at home in the middle of a hectic schedule that’s seen her pack in five tours since January.

The 31-year-old puts part of this burst of activity down to her stint on the Guilty Feminist tour and having supported Frank Turner — another name on the roster of politically minded artists marching out under a new folk banner.

‘For a while I had this chip on my shoulder a bit about how I didn’t think I was getting booked in the folk scene and I couldn’t really understand why,’ says Grace, who grew up on Bob Dylan and Joni Mitchell.

She then started listening to ‘proper traditional folk music,’ she says. ‘Some of it is a million miles away from what I do. In many respects I am closer to punk, the traditions of punk music, than I am to folk. But having said that, to my mind it’s very important and it’s inextricable to have politics in folk music. It’s the tradition of the working people.

‘Traditionally, it’s been used as a vehicle to speak truth to power and to speak about the injustices of the day it exists in. I do believe very strongly that there is no point to folk music if it doesn’t have some kind of social message. So in that regard we will always need new folk songs. There will always be an urgency for them.’

Grace didn’t set out to be a folk singer as such, first picking up a guitar in high school ‘to impress girls’. She laughs, hastily adding: ‘It didn’t work.’

Out tumbled the usual teenage odes to adolescent angst, that make up the formative years of any great artist.

But it was back in 2010 that everything changed. Theresa May was appointed Minister for Women & Equalities. Grace got angry. The rest, as they say, is history. ‘I realised for the first time that the rights that I have as a gay person and as a woman, and that gay people don’t always have and women didn’t always have, still need to be defended.

‘There always will be people working to take them away; the battle is never won.’ 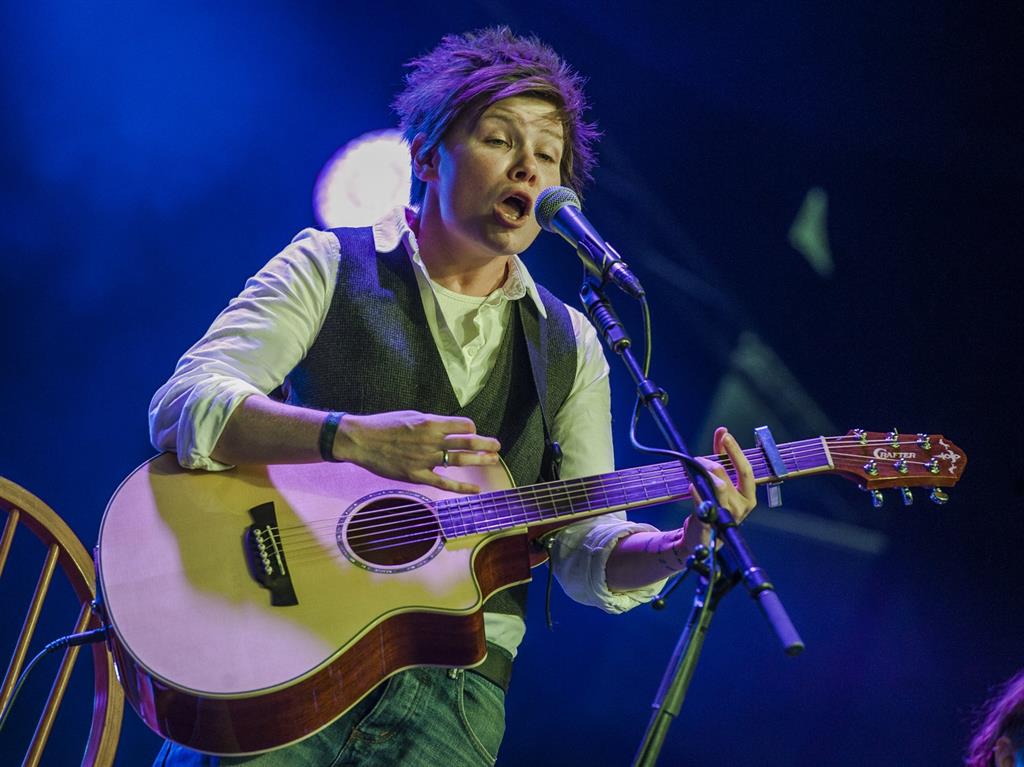 Eight crowdfunded albums in, Grace’s latest record was Queer As Folk, released last year. Track Black Tie has been one of its runaway successes, much to Grace’s surprise. A letter to her 15-year-old self, she thought it may have been too personal to strike a universal chord. She says: ‘But funnily enough, when it did go out into the world it became far and away the most popular thing that I’ve ever done. And I think there’s a lesson in that for me about trusting the audience a bit.’

Audiences have lapped it up, with Grace getting countless messages from teens who found solace in the song. ‘When I was a teenager I didn’t see anybody anywhere, on screen, on stage, that looked like me, and I think if I had I would have been so much less lonely.

‘So if I know that in some small way I can be that for people who are teenagers now, who are saying “oh, because of your song I have had the confidence to go to my prom wearing what I want to wear”, that feels like an incredible cosmic rebalancing and deeply cathartic.

‘I’ve had middle-aged straight men come up to me at folk festivals and say, “Oh that song Black Tie really got to me”. So I guess everyone’s got a lonely teenager inside them somewhere.’