LET’S face it, it was always going to be 50 miles into a 56-mile cycle across Ireland’s highest mountain passes that I broke, wasn’t it? I’m more ‘losing hope’ than ‘Lewis Hamilton’, barely passing hikers on our final climb of the Reeks District’s new Big Five Challenge in Co Kerry. Most of the hikers are looking at me like I’d be quicker actually pushing the bike, and it’s hard to disagree. But I struggle on through the rolling green wilderness regardless. This is type-two fun at it’s finest.

The 56-mile loop of the Ring Of The Reeks (named for the mountain range, The MacGillycuddy Reeks) would’ve been a big day out by itself. Given that an intrepid group of us had completed the rest of the Big Five in the previous two days — climbing Carrauntoohil (Ireland’s highest mountain, at 3,407ft), surfing in the Atlantic, kayaking across a glimmering Irish lake and stand-up paddleboarding after dark with only the moonlight and a glow stick each to guide us — I wasn’t feeling particularly fresh at the start of the day. Though there’s a chance the fourth Guinness the night before could be to blame.

The Big Five is a new addition to the Reeks District’s beautiful back country — the mountainous area in the middle of Co Kerry, on Ireland’s rugged southwest coast — just two hours from Cork (four from Dublin). Complete the five challenges in five days and you get your name on the Wall Of Fame in the quaint little town of Killorglin. It’s certainly no Ironman, geared more towards giving adventure-minded people an off-the-beaten-track alternative to the crowded coach routes than pushing you to your limits but it certainly gets the old blood pumping.

Climbing Carrauntoohil was the first challenge. The seven-hour hike up and down is no stroll, as the name of the Devil’s Ladder route suggests, but the views along the way make every step one further into a land of Irish folklore. Expect enormous glens filled with mountain goats, hares and rich Celtic myths and history; the kind of stuff Americans imagine when they’re trying to convince the bartender they’re one-eighteenth Irish on St Patrick’s Day. 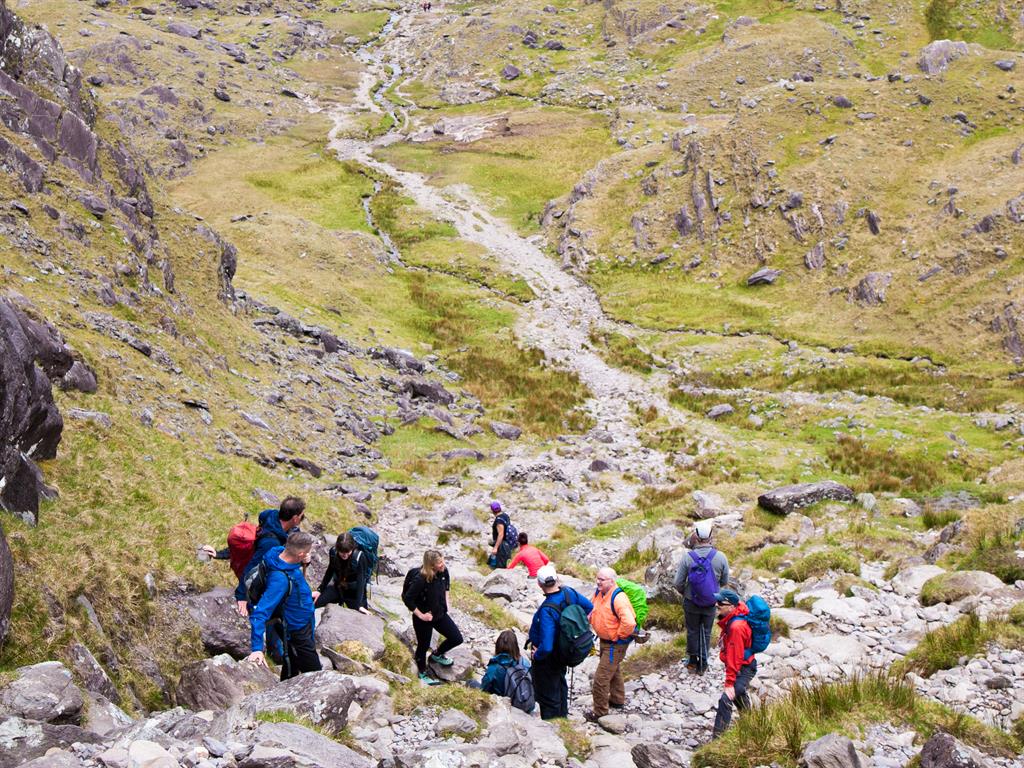 Next, I find the surf in the Atlantic isn’t as cold as you might expect, either. ‘The water holds its temperature pretty well, right through to October,’ Tom Leen of Kingdom Waves Surf School, who’s coaching us today, tells us. Unfortunately, a lukewarm ocean wave slapping you in the face is only marginally more comforting than the ice-cold version but after much instruction we spend more of the day standing on the waves at the scenic Inch Beach than we might have expected.

The 3.7-mile kayak across stunning Caragh Lake is serene, with only two fisherman and one rather obstreperous donkey on the shore to break the calm, while the paddleboarding on remotest Cloon Lough that night is a real spectacle. The lough is in the only gold-tier Dark Sky Reserve in the northern hemisphere, meaning there’s low light pollution and the stars are particularly visible. So are the bats that skim along the water as we paddle under the moonlight. The rifle-wielding farmer checking we’re not bothering his lambs only momentarily detracts from the magic.

The cycling, safe to say, is the most strenuous leg of the Big Five. Carrauntoohil seems to be at the centre of nearly everything in the Reeks District, and for the Ring Of The Reeks, that’s literally true. It’s bang in the middle of the 56-mile cycle loop, which weaves through mountain passes and proves the name of the Emerald Isle is an apt one. At the end, I’m exhausted, but it confirms that if you choose to only explore Co Kerry on a bus, you won’t see the half of it.

From €529 (£490pp) for four nights B&B and all five activities, based on four participants, reeksdistrict.com