A GROUP of amateur metal detectorists dug up a 14th century hoard of more than 550 rare gold and silver coins worth an estimated £150,000.

The four — including three Geordies — struck gold in a field in Buckinghamshire and were initially delighted to find 12 ornately decorated silver Edward I and II coins.

But the men — more used to digging up shotgun shells and thimbles than treasure — were astonished to find coin after coin from the hidden ancient hoard.

Over four days they excavated 557 coins — including 12 ultra-rare full gold nobles from the time of the Black Death.

Andrew Winter, 38, brothers Tobiasz and Mateusz Nowak, 30 and 33, and Dariusz Fijalkowski, 44, slept in a tent by the hole to stop thieves during the dig.

The hoard is being kept safe in a museum and will be independently evaluated before being sold, with the value split with the landowner in Hambleden, Buckinghamshire.

But the team, who have spoken to experts, estimate the treasure — nicknamed the Hambleden Hoard — could be worth £150,000.

The find is believed to be the biggest gold hoard found in Britain in nearly a decade, and the largest silver coin collection found in one place for 12 years.

Mateusz, a hospital cleaner from Newcastle, said: ‘It felt unreal.

‘After finding the hoard, and then clearing the area, we had to extend the search twice more because we were finding so much.

‘It was a miracle moment after moment for everyone.’

Tobiasz, a baker from Newcastle added: ‘I can’t even imagine how we got so lucky. It was the best weekend of my life. I’ll remember it my whole life.’

The find was made at an organised rally which was held on a field near Hambleden, a village recorded in the Domesday Book of 1086.

But while most participants found themselves digging up shotgun shells and bits of old iron, the foursome struck gold.

Pals Andrew, Tobiasz and Mateusz spent an hour digging on a field without finding anything, and were on their way to another location when their detectors signalled.

Andrew said his machine was emitting a code which suggested they had detected a hammered silver coin — so he started digging.

The trio turned over a clod of earth which contained two coins, and could see more in the hole. 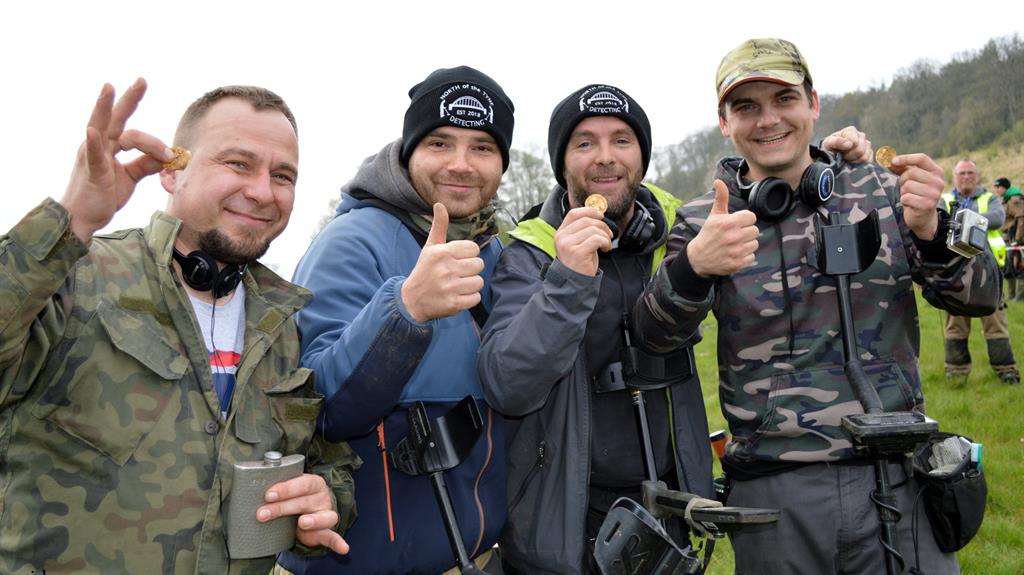 Under the rules of detecting and treasure finding, anything over three coins is considered a ‘hoard’ — meaning it has to be declared to organisers.

The area has to be cleared and was claimed jointly by the foursome, who were then left to work alone.

They said they had to fight off competition and admit it got ‘absolutely hectic’ when news of the find got round the festival.

Detectorists from all over the world who were at the festival came to take a look, as the four dug out coin after coin.

Andrew, a forklift and crane driver from Blyth, said: ‘I swung around my machine and all the silver coins were coming in at number 16 on the screen — this indicates a hammered silver coin.

‘The other signal I got was a 21. It went ting, ting, ting and sounds completely different to anything else. I shouted ‘gold, gold gold!’

‘The lads just looked at me and I knew then we had something special. We knew there and then this was going to be one of the ones you never, ever forget.

‘And to do it with my two best friends was really special.

Dariusz, a dad-of-three and machine operator from Bristol, came across the hoard after he had been ‘delighted’ with a thimble he’d found.

‘Before that — apart from the thimble — it had been shotgun shells.

‘When I found the coins I was shouting so much because I was so excited.

‘Maybe I should have stayed quiet but I was so happy. For me those coins alone were special. They are small pieces of silver and also a piece of history.

‘But to see what we found in the end. I still can’t believe it.

‘I came away to the rally for a rest because I have three young children. It’s safe to say it was not rest. I can still feel the pressure now. It’s incredible.’

On the first day they found 276 silver coins and nine gold nobles, and all admit they barely slept due to excitement.

Over three days the team’s hoard grew to 545 silver coins plus fragments, and 12 gold nobles.

Some of them have been doing the hobby for less than a year.

Anni Byard, finds liaison officer for the area, was called to oversee the excavation.

The location of each coin was painstakingly plotted on a grid.

The silver coins are believed to be from the reign of Edward I and II — 1272 to 1327 — and are a rare vintage mix of Lincoln, Birmingham, Ireland and Scotland.

The gold ones are from Edward III’s reign until 1377.

It is suspected the hoard was stashed there for safekeeping by a wealthy person more than 600 years ago.

‘It is my opinion that someone has hidden that money,’ said Mateusz.

‘You have to remember there were no banks like we have today.’

Andrew said the find was ‘very, very rare’ and added: ‘The coins look like they’ve come straight off the shelf.

‘They look brand spanking new. Some of the silver ones are really rare and have things on them — like little birds or churches — I have never seen before.’

He said the the 545 silver coins are still being analysed but most are likely to be worth between £20 and £50 each — with the rarer ones worth around £500 each.

He said: ‘It feels unreal. I can’t believe it. It couldn’t have happened to three more common guys you know.’