GARY LINEKER was the BBC’s biggest earner again last year, but is taking a pay cut of almost a quarter.

The former England captain pocketed a £1.75million cheque for hosting Match Of The Day in 2019/20, the same as the previous football season.

He has signed a new five-year deal that will see his wages drop 23 per cent to £1.354million, £10,000 less than last year’s second-highest paid presenter, Zoe Ball. The Radio 2 DJ has shot up the list of the Beeb’s top money-makers, her salary rising by £990,000 since she took over the Breakfast Show in 2019.

But the list fails to show a complete picture as wages for work done for BBC Studios, the broadcaster’s commercial arm, are not featured.

Ball’s stated salary does not include her gig hosting Strictly Come Dancing’s It Takes Two. And third-placed Graham Norton’s £729,000 takes account of his Radio 2 slot and some of his TV work, but not his chat show.

Speaking of his new deal, Lineker said: ‘I love working with the BBC, and am very proud to continue to be a part of their outstanding football team. I’m looking forward to the next five years — with a European Championship and World Cup on the horizon, it’s exciting times for me and the team.’

Following the announcement, he also tweeted: ‘Oh dear. Thoughts are with the haters at this difficult time.’

The 59-year-old has criticised the government and Brexit in the past and, along with his fellow hosts, has been reminded of his ‘responsibilities’ to the impartial BBC when using social media.

Director-general Tim Davie defended Ball’s wages after she shed nearly a million listeners in the first year in her new role, saying she is ‘absolutely at the top of her game’. 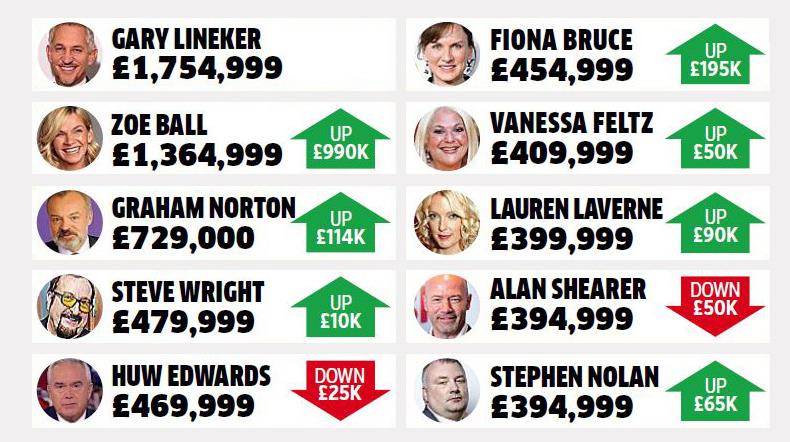