VINTAGE CLOUDS will aim for redemption in tomorrow’s wide-open Coral Scottish Grand National at Ayr, a week after his huge Aintree disappointment.

The Sue Smith-trained grey was a popular choice for the Grand National last weekend but fell at the first fence on Merseyside.

Dingo Dollar and Big River head the sponsor’s betting for the race at 8/1, ahead of Beware The Bear at 9/1. Vintage Clouds is a 10/1 chance, along with Crosshue Boy.

‘Unlike last weekend’s Grand National market, which was dominated in the build-up by one horse, the betting for this year’s Coral Scottish Grand National is wide open,’ said Coral’s David Stevens. ‘Any one of the first six or seven in the list could be sent off favourite for what is always one of the highest turnover betting races of the year.’

AUSTRALIAN wonder horse Winx is all set for her anticipated swansong this weekend, despite providing a touch of pre-race drama after her final gallop.

Chris Waller’s all-conquering mare, who has captured the attention of the racing world, will bid for her 33rd successive victory — and 25th Group One — when she runs in what is expected to be the last race of her record-breaking career at Randwick tomorrow.

The seven-year-old caused connections brief consternation, though, when she kicked out at railings — leaving a hole in an advertising hoarding — after her Rosehill track exercise yesterday.

She later had to be cleared by veterinary checks and a statement said: ‘Winx was free in her action and no abnormalities were detected. As a result the mare has been passed fit to start on Saturday.’ 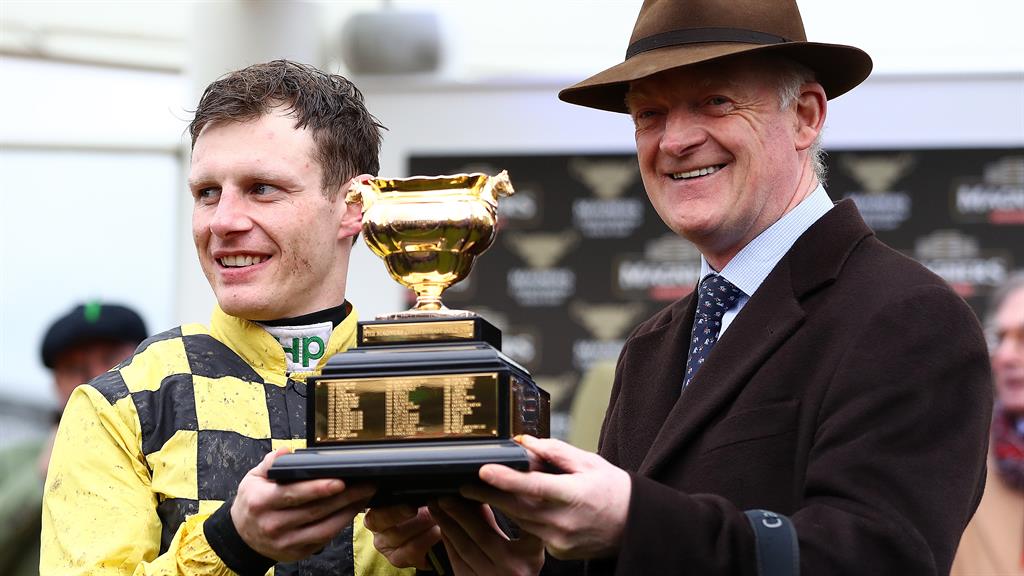 CHELTENHAM Gold Cup hero Al Boum Photo could face a mouth-watering meeting with Kemboy after both appeared among 22 entries for the Coral Punchestown Gold Cup.

Trainer of both horses, Willie Mullins, is happy for the two to face each other again on May 1. Kemboy got no further than the first fence in last month’s Gold Cup, but bounced back with a dominant display at Aintree last week.

■ RICHARD HANNON’S Boitron will face nine rivals in the absence of Too Darn Hot in tomorrow’s highly competitive Greenham Stakes at Newbury. John Gosden’s 2,000 Guineas favourite Too Darn Hot was due to go off at prohibitive odds until he was pulled out on Wednesday.

■ BYE BYE HONG KONG, ridden by Silvestre de Sousa, claimed victory in yesterday’s Woodford Reserve Cardinal Conditions Stakes at Chelmsford. All eyes were on U S S Michigan as he attempted to book his place in next month’s Kentucky Derby, but he finished fourth.

■ DOUVAN could make his return from injury for the Champion Chase at the Punchestown Festival. The nine-year-old has been very unlucky with injuries over the past couple of seasons and has not raced since he was second in the same race last year.

■ 9 — Races to be televised by ITV tomorrow afternoon — five from Ayr, including the Coral Scottish Grand National, and four from Newbury