I VOWED I’d never do one and I don’t think I’ll do one after this,’ says actor Frances Barber, 61, of her current one-woman show, Musik. ‘It’s very frightening to be up there on your own. It’s quite lonely.’ It’s doubly surprising then that her one-woman debut is a musical, written by playwright Jonathan Harvey.

‘I’m not a massive fan of musicals,’ she says. ‘I like classics like Oklahoma, but I find modern musicals a bit squirmy when people suddenly start breaking into song. But this isn’t really a musical. It’s a cabaret, with songs by the Pet Shop Boys.’

Musik is a sequel to the 2001 West End hit musical Closer To Heaven, also written by Harvey, and with a Pet Shop Boys soundtrack, in which Frances played the role of narrator Billie Trix, a washed-up rock star and actress.

Now, Billie gets her own full hour in the spotlight and Frances couldn’t be happier. The show was a hit at the Edinburgh Fringe Festival in the summer and is now enjoying a run in London.

‘She’s a rock star in the mould of Nico or Marianne Faithfull,’ Frances explains. ‘She thinks she was at the apex of every important moment in history. She says she invented Andy Warhol’s soup can paintings and that Donald Trump stole her idea for a wall.’ Musik sees Billie reminisce about her decades in showbiz and as an inspiration to the influential. There are songs — written by Neil Tennant and Chris Lowe — to accompany most of her landmarks.

Soup is about how she was Warhol’s muse, Run Girl Run is the protest song she claims ended the Vietnam War, Ich Bin Musik reflects her time as a Eurodisco diva and Friendly Fire, which was originally performed as part of Closer To Heaven, serves as the requisite tear-jerking ballad.

Recording the songs with her old Pet Shop Boys pals — she also sang Friendly Fire on their 2006 live album, Concrete — was also a highlight.

‘They’ve written the songs for me so they’re all in my range. They were released just before the show opened at the Edinburgh Festival. There was a moment when Frances Barber and the Pet Shop Boys was at Number One on Spotify in Spain. It’s the most wonderful thing that’s ever happened.’ 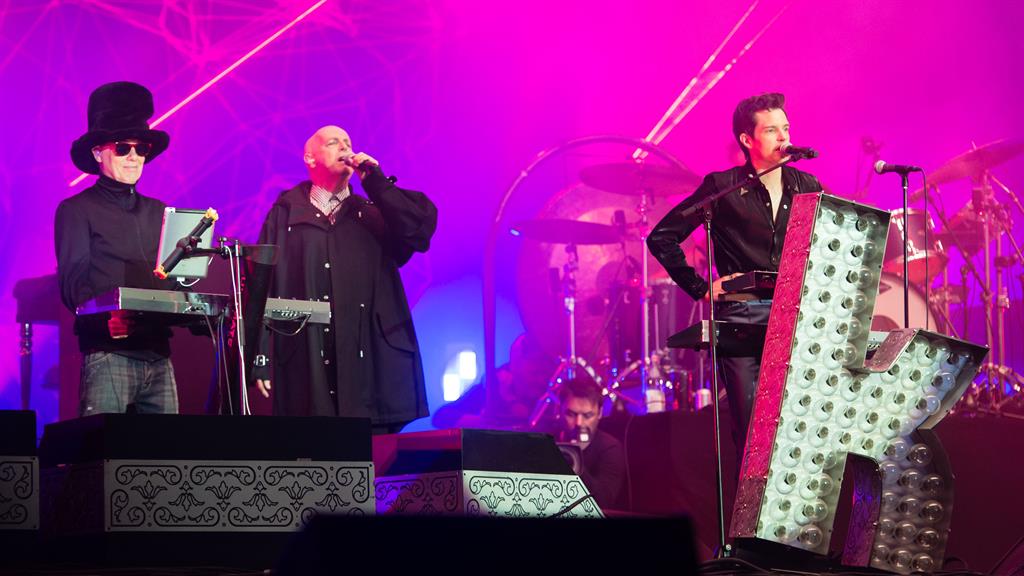 Frances puts her career longevity down to not being typecast. She started out doing improvised plays with the Hull Truck Theatre company in the late 1970s and from there landed a role in Mike Leigh’s 1982 TV film, Home Sweet Home.

‘I’ve been incredibly lucky and it’s because I’ve had a mercurial career,’ she says. ‘I’ve combined doing independent movies in the 1980s — with directors such as Stephen Frears and Peter Greenaway — with working with the RSC and all kinds of stuff on TV.

‘I was playing mothers at the age of 26 to actors who were 18. I was never the pretty young thing who played Juliet. I’d always be cast as the character part, so I’ve never been pigeonholed. It’s helped me continue to work.’ Billie Trix has propelled herself through the decades fuelled by her huge amounts of unshakeable self-belief. Does Frances have the same?

‘No. If I had a daughter I’d tell her not to do it. I’m one of the lucky ones. I know people with more talent than me who stopped acting because they couldn’t take the rejection — and you are constantly rejected. Once a week, if you’re lucky.’

Frances points to TV shows such as Big Little Lies, as an example of actresses producing their own work, and she has ideas for her own theatre projects.

Before she starts on those, there’s the month-long run of Musik to finish before bidding farewell to Billie.

‘There are so many moments in this which really make me laugh,’ says Frances. ‘She says, “Some people say ‘Billie you are so pretentious.’ I think it was Sartre.” I adore her.’

■ Musik runs at the Leicester Square Theatre until March 1, leicestersquaretheatre.com