THOUSANDS of hungry animals stranded in the Australian bush fires crisis are being given emergency food packages — from the sky.

In New South Wales, more than 2.2 tons of vegetables, including carrots and sweet potatoes, have so far been dropped from planes and helicopters into national parks.

Operation Rock Wallaby is mainly focused on the state’s colonies of brush-tailed rock wallabies already at risk before the fires because their habitat had been destroyed.

New South Wales environment minister Matt Kean said: ‘The wallabies typically survive the fire itself but are then left stranded with limited natural food as the fire takes out the vegetation around their rocky habitat.’

Animals Australia has also used planes to take three tons of food along with vets, veterinary supplies and a generator to injured and burnt wildlife in Victoria. The charity’s Lyn White said : ‘With roads likely shut for weeks, the risk of starvation for surviving wildlife is very real.’

The World Wildlife Fund estimates about 1.25billion animals have died directly or indirectly from the fires.

Pranked reporter grins and bears it with ‘dangerous’ koala 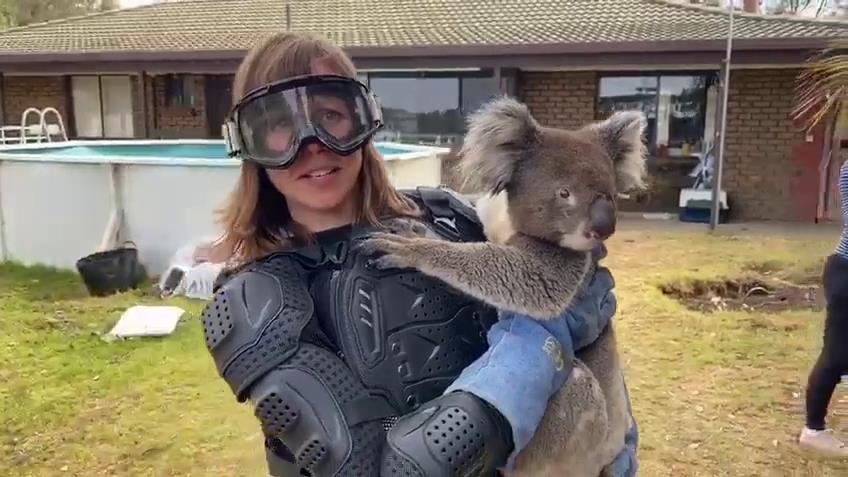 AN ITV reporter was duped into thinking she was holding a dangerous bear by pranksters — who gave her a koala.

Debi Edward, 40, from Aberdeen, was given body armour and a mask by staff at Kangaroo Island Wildlife Park where she was covering the Australian bush fires.

They told her the ‘drop bear’ was like a koala but with sharp claws and tiny fangs.

She only caught on when her hosts began laughing. She joked: ‘****ing Aussies.’