A BRITISH woman has warned of the danger of cut-price plastic surgery abroad after she nearly lost her leg having an operation in Turkey.

Sian Elliott had spent £3,000 on full body liposuction last year but was left with saggy skin on her legs so returned for another £2,000 ‘thigh-gap’ operation in Istanbul in October.

But the 29-year-old woke up in agony after the three-hour surgery and her stitches popped open on the flight home. 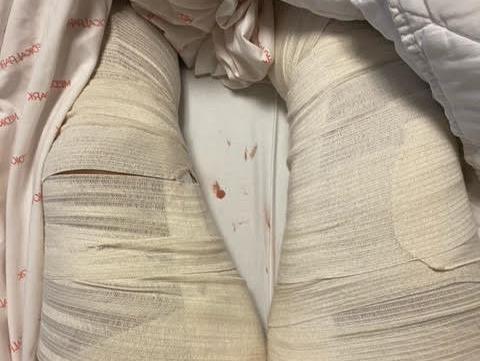 The mum-of-two’s wounds began to weep and UK doctors found she had the flesh-eating bug necrotising fasciitis.

After surgery at Royal Free Hospital, she was told her leg would have been amputated if she had sought help later.

Ms Elliott, a domestic assistant at Whittington Hospital, in north London, said: ‘I really want to warn others about going abroad for cheaper surgery. I don’t know what I would do if I’d lost my leg.

I can’t complain to the Turkish hospital — they don’t want to talk to you. They were so nice before you handed the money over. After that they completely changed.’