A TEENAGE asylum seeker who was badly beaten at a bus stop has been named as five people appeared in court charged over the attack.

Reker Ahmed, a 17-year-old Kurdish Iranian, suffered a fractured spine, fractured eye socket and a bleed on the brain.

He was set upon by a gang while waiting at the stop outside The Goat pub in Croydon, south-east London, on Friday. 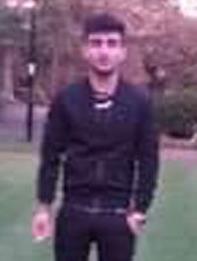 The teenager was chased for about 100 yards into an estate before being punched and kicked outside a nursery after a group of people discovered he was an asylum seeker.

Two of his friends, Dilshad Mohammed and Hamo Ahmed Mustafa, were also chased.

Mr Ahmed, who has lived in Croydon for several months, is in a serious but stable condition.

Det Supt Jane Corrigan said he is ‘going to be scarred for life’ but has been moved from intensive care into a mainstream ward.

‘His face did receive some significant injuries, that was the main focus of the attack,’ she said.

‘But what I can say is that without a doubt this will leave lasting scars.’

Police have said about 20 people were involved in the ‘brutal attack’. Seven people have been charged and 16 held in connection with the assault.

Five people from the local area — including two pairs of siblings — appeared before Croydon magistrates yesterday.

George Walder was remanded but the rest were bailed to appear before Croydon crown court on May 1.

Kyran Evans, 23, and a 17-year-old girl are due in court today charged with violent disorder.