This is Alfa Romeo’s first SUV – no pressure – so the Italians certainly aren’t messing around when it comes to showcasing Alfa’s interpretation of an off-roader. Rather than borrowing some bits from sister company Jeep, Alfa has started afresh with the Stelvio – basing it on the platform of the recently launched Giulia saloon instead. This, says Alfa, helps keep the Stelvio’s handling in check – providing much more car-like dynamics along with a rear-biased four-wheel-drive system.

Engines are largely shared with the Giulia too – although the 2.2-litre diesel has been given a boost, now outputting 207bhp in its most powerful guise – and the four-wheel-drive system is the same rear-biased set-up you’ll find on Alfa’s new saloon as well.

From the front there’s no mistaking which stable the Stelvio belongs to: Alfa’s trademark shield-shaped grille sits proudly in the centre, flanked by headlights that anyone familiar with the Giulia will be quick to recognise. In profile, the Stelvio is definitely more of a svelte crossover than a stout-looking SUV, and we reckon that’s no bad thing – in fact, it belies its size far more successfully than a BMW X4 or Mercedes GLC.

Inside, things are pretty impressive too. Materials can’t really be faulted, the dash is attractive and logically designed, and the driving position is spot-on. What Alfa hasn’t quite nailed, though, is the wow factor that Mercedes, Jaguar and even Audi manage to instil into interior design. The Stelvio’s insides are sleek and sophisticated, yes, but there are no party tricks to shout about – no fancy quilted leather, no touch-sensitive buttons, no fancy ‘virtual cockpit’-like screen behind the steering wheel.

Similarly, while the infotainment system is miles better than that on Alfas of old, it’s not quite up there with the BMW iDrives of this world – the strangely tiny rear parking camera display alone would never have been signed off by Bavaria’s finest. Quirks aside though it’s not a bad effort at all, and Alfa has clearly put some thought into a few nice details in the cabin – such as the flat-bottomed steering wheel and tactile metal paddle shifters. 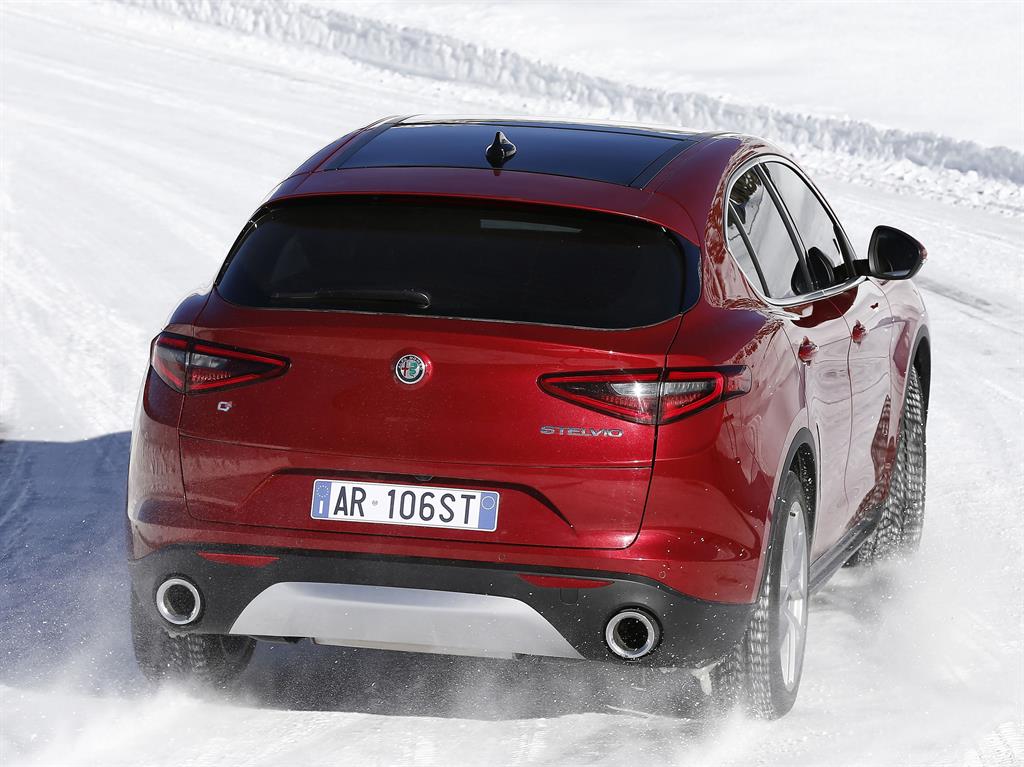 Given its shapely body, the Stelvio isn’t quite as practical as some of its more traditional-looking SUV rivals – think more BMW X4 than X3, for example – but there’s easily still room for four adults and their luggage. Rear legroom is decent, the boot space is par for the course at 525 litres, and it’d be relatively easy to get child seats in and out too. Rear visibility does take a bit of a hit though, thanks to the relatively small rear window and thick rear pillars.

Alfa has filled the Stelvio to the brim with safety kit too, so there’s technology aplenty to help prevent a crash. All the usual 2017 bits are there – lane departure warning, blind spot monitoring with rear cross-path detection, and forward collision warning with automatic emergency braking – and although the Stelvio is yet to be tested by Euro NCAP, the Giulia saloon on which it’s based has already received a five-star rating.

Alfa Romeo is very keen to stress that this isn’t just another SUV with some sporty bits tacked on – instead, designing the Stelvio with driving dynamics in mind from the very beginning.

That philosophy seems to have paid off. From behind the modern, flat-bottomed steering wheel you’ll find a car-like driving position and a cabin that’s more driver-focused and enveloping than in a typical SUV.

Where the Stelvio really shines is in the way it drives, though. The steering itself is direct, accurate and – although a little bereft of feedback – delicate without feeling over-assisted. Despite its relatively tall body, there’s very little roll around corners – something Alfa’s engineers are rightly proud of – and at 1,660kg for the 2.0-litre petrol, it’s 100kg lighter than even the daintiest of its German rivals too.

Combine those elements and you’ll find an SUV that’s as enjoyable around a set of corners as a well-sorted saloon or estate, and although the trade-off for all that composure is a relatively firm ride, it’s not unreasonable or uncomfortable by any means.

Refinement isn’t bad either. We’d like a touch more soundproofing to separate the cabin from that familiar four-cylinder diesel rumble, but beyond that the Stelvio should make for a comfortable motorway cruiser too. 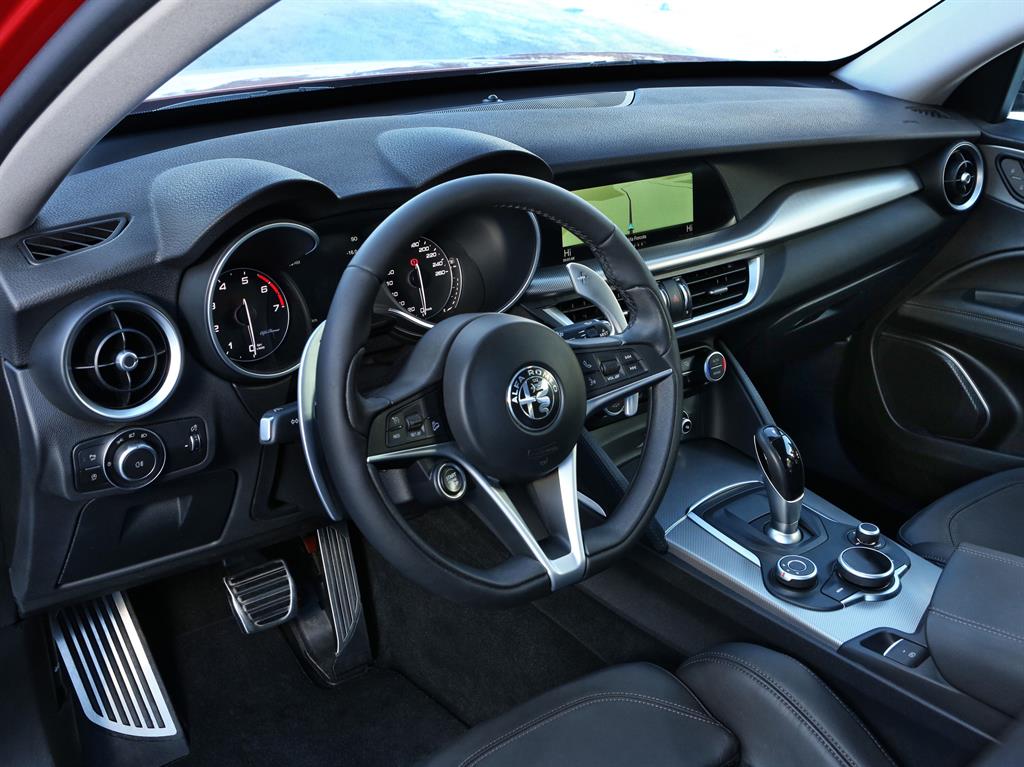 Pricing is yet to be announced for the Stelvio, but given the BMW-rivalling list prices of the Giulia, expect something in the region of £40,000 for a mid-range car. That’s a dangerous place to find yourself in this market – with the likes of the Mercedes GLC, BMW X4 and Audi Q5 all circling.

To keep things simple there are just three trim levels – Stelvio, Business and Super – and even entry-level cars get an array of standard safety kit, front and rear parking sensors, a 6.5-inch infotainment screen, keyless entry and 17-inch alloys. Upgrade to Super and you’ll get half-leather seats, bigger alloys and so on, while Business bundles in a few options above the entry-level car but only BIK-friendly diesel engines.

Above that, the options list gives you some assorted niceties such as a posher Harman Kardon stereo with either 10 or 14 speakers, a ‘full-grain’ leather interior, a heated steering wheel and so on.

Most of the usual electronic toys such as active cruise control are available too, although don’t expect VW-group levels of sophistication just yet. If you’re after LED headlights, active park assist or a head-up display, you’d best take yourself off to buy that Q5 (or even a Tiguan).

Who would buy one?

As this is Alfa Romeo’s first SUV and, along with the Giulia, one of its first family-sized cars in half a decade, the Stelvio’s customers are likely to be new to the brand – snaring some ex-Audi and BMW owners.

Alfa would like to think its customers are just a tad more discerning than the usual SUV rabble: more interested in design and handling than whether or not you can have in-car wifi. To an extent, they’ve nailed that brief – the Stelvio is probably the sweetest-handling SUV this side of a Porsche Macan, and in the looks department alone it’s effortlessly sophisticated compared with its slab-sided German rivals.

Company car users are on the agenda too, targeted by a diesel-only trim level imaginatively called the ‘Business’. Even the most powerful diesel chucks out a mere 127g/km of CO2 on the combined cycle – less than the equivalent Audi Q5 or BMW X3 – so it’s likely that the Stelvio should offer a competitive proposition for anyone subject to benefit-in-kind.

Facts at a glance