THOUSANDS of firefighters have paid tribute to London Fire Brigade commissioner Dany Cotton on her final day of service as she steps down in the wake of criticism in the Grenfell inquiry.

They lined the streets yesterday and formed a ‘guard of honour’ outside the London Fire Brigade headquarters in Southwark, south London.

Ms Cotton, its first female commissioner, was originally set to retire next April after 32 years of service. 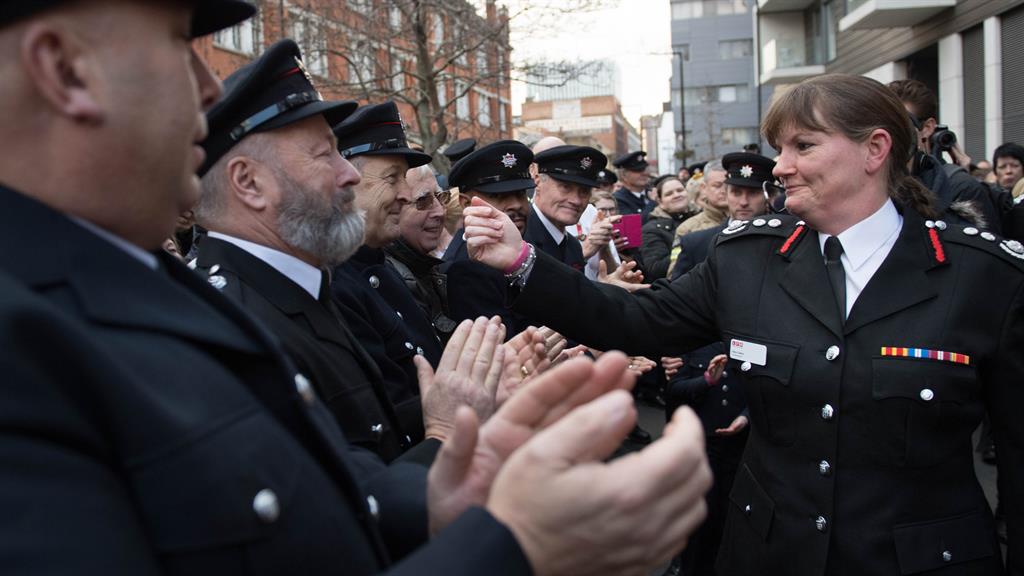 However, she announced her resignation on December 6 and is stepping down earlier than expected in the wake of criticism over the service’s response to the Grenfell Tower fire in north Kensington.

Ms Cotton had been facing pressure to resign from bereaved families and survivors after the first report from the Grenfell inquiry found that the LFB’s preparation for a tower block fire such as Grenfell was ‘gravely inadequate’ and its lack of an evacuation plan was a ‘major omission’.

Inquiry chairman Sir Martin Moore-Bick said more lives could have been saved in the June 2017 fire had the policy of ‘stay-put’ been abandoned sooner.

Addressing and hugging supporters in central London, Ms Cotton was met with bagpipes and applause.

Taking to an impromptu stage on top of a 1937 Leyland Metz fire engine, she said: ‘Things have been a bit difficult recently, but the messages of support I’ve received, the emails, the messages on social media, have just made everything OK.

‘It makes me feel proud, the fire service looks after each other.

‘It’s been an immense honour and privilege to be commissioner of the LFB.

‘When I started two years ago, if you had told me I’d be commissioner or chief officer, I would have laughed and run away.’

When asked what her legacy was in the role, she said: ‘For me, I think everything I’ve done is a legacy but especially recently mental health awareness.’

She added: ‘I think it’s been a really difficult few months, I think times are challenging for people.

‘I’m very very sad to be leaving but I think the legacy of all these people here shows that I must have done something all right.

‘People here have chosen to come out today, it’s their choice and I think it’s lovely that people have come together.’

Since her controversial resignation, former and current firefighters have publicly expressed their support for Ms Cotton and their anger at the conditions of her departure.

Former firefighter Lucy Masoud said many members of the service thought Ms Cotton was unfairly targeted after the Grenfell Tower tragedy, in which 72 lives were lost.

She said: ‘We are thoroughly frustrated and angry that she’s been forced from her position as she has.

‘Dany Cotton was very well respected, she was an absolutely excellent fire commissioner and a leader.

‘To see her go in this way, we feel she’s been so unfairly treated because of the criticisms that have come out of the Grenfell inquiry.’

The report into phase one of the Grenfell Tower inquiry was released in October and focuses on what happened on the night of the tragedy and the actions of the LFB.

Phase two, which is expected to begin early next year, will examine the causes of the tragedy.

Ms Masoud continued: ‘We feel it’s unfair that the focus of what went wrong at Grenfell is being levied on her when what we should be doing is focusing on who put that illegal cladding on the building.

‘We’re so angry that not only her but firefighters are being blamed for what took place at Grenfell.

‘It wasn’t firefighters who put flammable cladding on that building and that’s what we need to be focusing on.

‘What we don’t need to be doing is sacking a firefighter.’

Ms Masoud added that questions needed to be raised about the role of funding cuts and station closures in London, particularly when prime minister Boris Johnson was mayor.

However, the tributes have been criticised as a ‘street party’ by some members of the community affected by the Grenfell tragedy.

Joe Delaney, from Grenfell Action Group, said: ‘Given the findings of the recent inspection, LFB would be better off if efforts were directed at providing its personnel with the training they have been denied and its funding were directed at providing them with the equipment they desperately require, rather than organising what is essentially a street party for a commander who put the politics of austerity before her duty to protect the wellbeing of London’s firefighters and the lives of its citizens — who are still living in dangerously unsafe housing almost three years after Grenfell.

‘Cotton’s departure, whilst welcome, is not the time for a parade. Her period in office is noteworthy, but most certainly not for the right reasons and her departure is therefore best allowed to happen without ceremony.

‘When we have building regulations that are fit for purpose, and a properly trained and equipped fire fighting service, then all of London can celebrate, not before.’

Ms Cotton will officially step down on New Year’s Eve and will be replaced by Andy Roe, who has served with the LFB since 2002.