HUNDREDS of thousands of commuters faced travel misery yesterday as 27 days of industrial action began at one of the country’s busiest rail operators.

Members of the RMT union on South Western Railway (SWR) walked out on the first day of strikes lasting until New Year’s Day in a row over guards on trains — the longest stretch of action against a major rail company in living memory.

Passengers had been warned that only around half of services will run, including those to and from London Waterloo, the country’s busiest railway station. Yesterday morning’s disruption was worsened by a track circuit failure which hit services between Reading and Ascot. 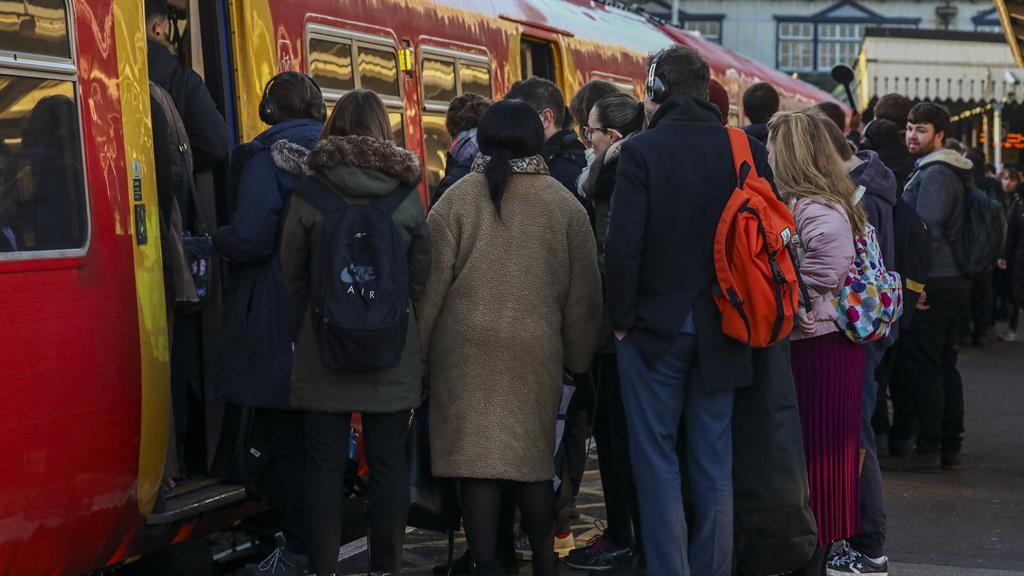 Many crowded along platforms as they waited to cram on to packed trains.

Angela Lewis, 44, told London’s Evening Standard: ‘There were huge queues on to the street, people fed up and tempers already being tested.

‘I think the length of this strike will really push people’s buttons.’

RMT assistant general secretary Steve Hedley said about 900 union members were on strike. Around 30 of them formed a picket line outside Waterloo next to a banner reading: ‘Keep the guard on South Western Rail. This strike is all about safety.’

Mr Hedley said he hoped the union and SWR could reach a deal, after talks at conciliatory service Acas collapsed last week. ‘Our people don’t want to lose 27 days of pay, but they have really come to the end of their tether,’ he added.

SWR has agreed that guards will be employed on its new fleet of 90 Aventura commuter trains but wants them focused on ‘customer-facing’ roles, leaving drivers responsible for closing doors. It said it had ‘done everything we can and more’ to meet the RMT’s demands but accused the union of repeatedly changing its position.

Meanwhile, rail passengers on the East Coast Main Line faced major delays and cancellations due to ‘severe’ overhead wire damage north of York. Operator LNER was advising them to defer travel until today.

■ A TRAIN driver who stank of booze following a crash has been convicted in his absence — after he was unable to get to court because of South Western Railway’s strike. Joseph McKeraghan, 59, of Raynes Park, south west London, was found guilty of working as a driver while unfit through drink or drugs. Westminster magistrates’ court heard he crashed a train at a London depot last December. A test showed he had been drinking, despite a rule that drivers must be fully free of alcohol. A warrant will be issued for his arrest.