I’LL BE BACK, Arnie first threatened in 1984. He’s certainly made good on that promise. Seeing Arnold Schwarzenegger back (again) in the role that set him on a path to global domination is no longer a thrill following a slew of disappointing sequels.

Wisely, however, Dark Fate wipes most of those from history. Aiming to do a Force Awakens on the franchise, its secret weapon is to reunite the Terminator with the woman he was first sent to kill: Sarah Connor.

A direct sequel to 1991’s Terminator 2: Judgment Day, it’s definitely the best T3 to date. A scenario so familiar, which even its own characters comment on, sees an android assassin (Diego Boneta) sent from the AI-dominated future to kill a human (a sweet and utterly side-lined Natalia Reyes) who might halt the rise of the machines. 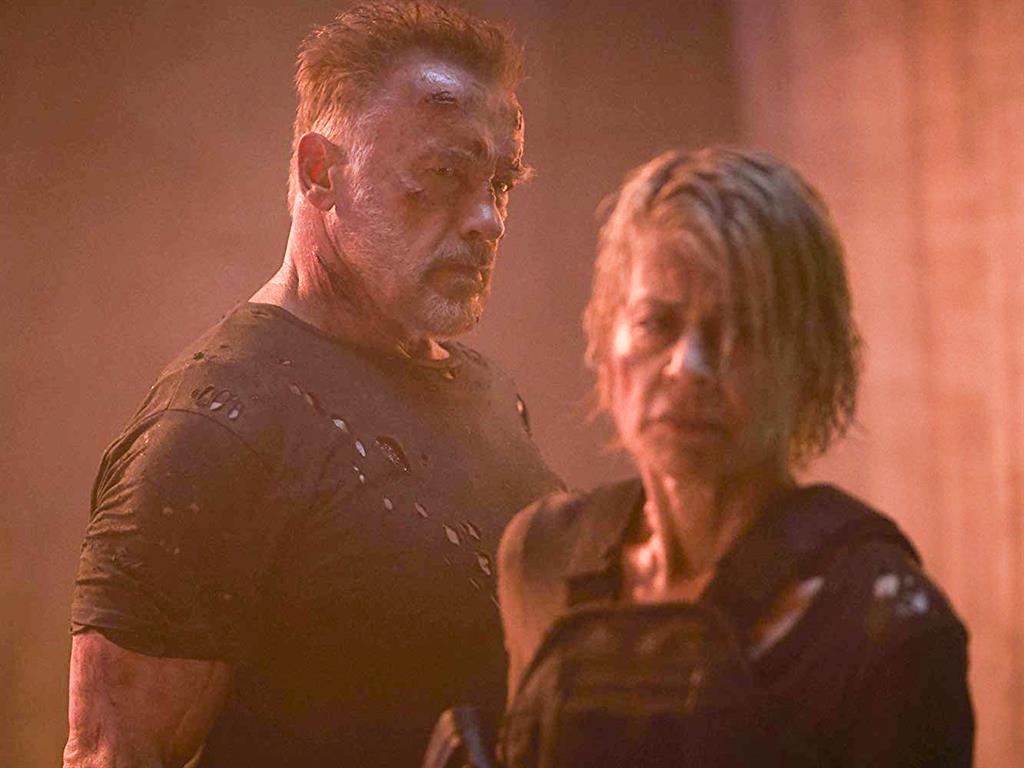 Handily, another goodie Terminator — sorry, ‘augmented super-soldier’ (a perfectly cast Mackenzie Davis) — is sent from the future to protect said human, eventually teaming up with a battle-hardened Sarah Connor (Linda Hamilton) and her old frenemy (Schwarzenegger).

This certainly delivers on the girl power and action front, battering you with endless expensive explosions, pulse-pounding highway smash-ups, and enough sun-drenched military hardware to give Michael Bay a private party in his pants.

Sadly, none of it is remotely memorable. Still, expecting Dark Fate to equal T2’s meteor-sized impact on pop culture was always a tall ask. And though he was hand-picked by original Terminator creator James Cameron, you wonder if Deadpool director Tim Miller was really the man for the job.

Predictably great with the funny meta stuff (a hilarious scene wherein Arnie discourses on the merits of polka dot curtains, for example), Miller is less sure on the drama or on how to handle his leading lady.

Fervently committed to the role of Sarah Connor, the image of what a female action hero could be, a 63-year-old Hamilton is hands down incredible as a grey-haired, muscle-hardened, gun-crazed alcoholic who’s seen the future and wants to shoot it in the face. However, she’s in a different — and far superior — film to everyone else. Sadly, a final scene suggests we’re in for more of the same from the next sequel. As Hamilton’s character puts it: ‘These a**holes never learn.’