Birds Of Prey: And The Fantabulous Emancipation Of One Harley Quinn

SHOULD Margot Robbie’s stunning double Bafta nominations have left you in any doubt (she competed against herself for best supporting actress), the Oscar- nominated 29-year-old superstar is having a moment.

Her hammer-swinging Harley Quinn was the breakout bad grrrl of Suicide Squad, with her iconic hotpants and rainbow pigtails launching a thousand Halloween costumes. And it’s Robbie’s thermonuclear wattage that powers this hyperactive supervillain silliness over its duffer patches. Here Robbie returns as Dr Harleen Quinzel, a former clinical psychologist who has her sanity flipped by her patient, Jared Leto’s Joker (thunkingly absent here), causing her to trip gaily off to the dark side.

Our story sees Harley dumped by her dysfunctional lover ‘Mistah J’. She then struggles to reclaim her own identity while furiously pursued by both Gotham’s cops and robbers.

Despite Harley teaming up with the likes of Mary Elizabeth Winstead’s Huntress and Jurnee Smollett-Bell’s Black Canary to form the Birds Of Prey, this is a break-up flick more than it’s a ‘get the gang together’ movie. Like the wordy title, it’s a tale heavily weighted in Harley’s fabulous favour. There’s more than lip-service paid to girl power too, with Robbie herself producing and Cathy Yan directing.

And we’re never allowed to forget that Harley, for all her little-girl pouting, is one smart cookie: ‘I’ve got a PhD, you motherf***er!’ she yells at Ewan McGregor’s miscast villain, Black Mask.

The massive plus is that, unlike most of the DCEU, Birds Of Prey offers bountiful bubblegum fun. Harley’s lip-smacking lust for violence is largely bloodless — her guns fire beanbags and glitter.

Swinging wildly between brilliantly gonzo set pieces and pancake-flat interludes, it makes for a bumpy ride, even if a remixed pop score from Into The Spider-Verse’s Daniel Pemberton keeps your tootsies tapping. 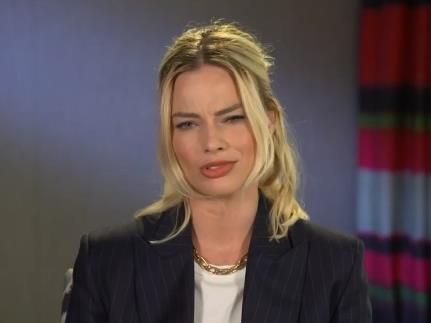 ■ MARGOT ROBBIE winced when Oz TV host Carrie Bickmore asked if she and hubby Tom Ackerley, 30, get time to ‘Netflix and chill’ — without realising it was slang for sex. Blushing Margot replied: ‘We don’t get much downtime but we have a lot of fun.’