BORIS JOHNSON was last night taken to hospital as he continued to struggle with coronavirus.

The prime minister — diagnosed ten days ago — was admitted on doctors’ advice for tests, No.10 announced shortly after 9pm last night.

Mr Johnson’s spokesman said in a statement: ‘This is a precautionary step, as the prime minister continues to have persistent symptoms ten days after testing positive for the virus.

‘The prime minister thanks NHS staff for all of their incredible hard work and encourages the public to continue to follow the government’s advice to stay at home, protect the NHS and save lives.’

Earlier in the evening, health secretary Matt Hancock (pictured below) had insisted Mr Johnson, 55, was ‘OK’ and in regular touch with ministers and officials while in self-isolation.

Mr Johnson’s partner Carrie Symonds, 32, who is pregnant with their child, revealed on Saturday that she had also suffered symptoms but insisted she was on the mend.

The pair have been living at separate addresses since the PM was taken ill — him in self-isolation in Downing Street and her staying at her flat in Camberwell, south London. 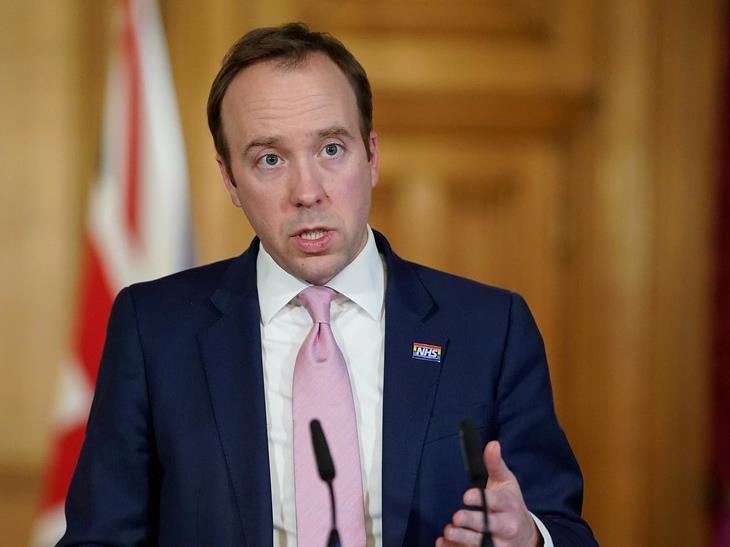 ‘Whatever political persuasion the whole country is united in wanting our PM to get fit and well as soon as possible #BackBoris.’

Former business secretary Andrea Leadsom, sacked from the government earlier this year by Mr Johnson, posted: ‘Praying for a speedy recovery for our prime minister.’

Mr Johnson has been tweeting video updates since falling ill with the virus, which has now killed 4,934 people in the UK after the death rate rose by another 621.

The PM’s online appearances led many to comment on how unwell he looked. He also appeared briefly in Downing Street on Thursday night to join a #ClapForOurCarers five minutes’ applause for NHS staff.

He posted a video on Friday saying he would remain in isolation — in contrast to Mr Hancock who returned to frontline duties after six days at home with the virus.

Downing Street officials insisted Mr Johnson’s admission to hospital was not an ‘emergency’ case but he continued to show symptoms including a high temperature.

They said he remained in charge of government and in contact with colleagues and officials.

Ms Symonds tweeted on Saturday evening: ‘I’ve spent the past week in bed with the main symptoms of Coronavirus. I haven’t needed to be tested and, after seven days of rest, I feel stronger and I’m on the mend.’

Deaths from the virus rose by less than the 708 reported on Saturday.

It was the first time for six days that the increase was not a new high but confirmed infections did go up at a record rate, by 5,903 to 47,806.

Outdoor exercise could be banned to make sure people stay at home, Mr Hancock warned.

He reprimanded the ‘small minority’ who have been ‘pushing the boundaries’ of the lockdown, including by congregating on river banks and sunbathing in parks in the fine weather. He urged them not to jeopardise efforts to slow the spread of infection at a ‘mission-critical’ time in the fight against Covid-19.

‘Exercise is good for our physical and mental health but please do not break or bend the rules — we can’t rule out further steps,’ Mr Hancock said.

There was a glimmer of hope from worst-affected countries Spain and Italy, which saw significant drops in both deaths and infections.

And Mr Hancock said the peak here could be reached within days.