I’M SITTING cross-legged under the grey stone portico, my singing bowl gently humming, and breathing out a deep, resonating ‘ommm’ that echoes impressively around the arches. Outside, the swirling dawn mist shrouds the mountain, gently licking the curled roofs of the temples and tiered pagodas peeking out of its jungled slopes. I feel like I’m in a Vietnamese adaptation of Crouching Tiger, Hidden Dragon and, without my bolstering morning coffee, I struggle to remember which century we’re in.

Early morning meditation in the mountains is quite a contrast from yesterday, when I was dodging a million buzzing scooters in the bonkers streets of Hanoi. Less than three hours from the city, just off the well-trodden path to Halong Bay, Yen Tu Mountain is a popular pilgrimage site known as the ‘cradle of Zen Buddhism’, yet until now it’s been almost entirely off the radar to Western travellers due to a lack of infrastructure and accommodation. 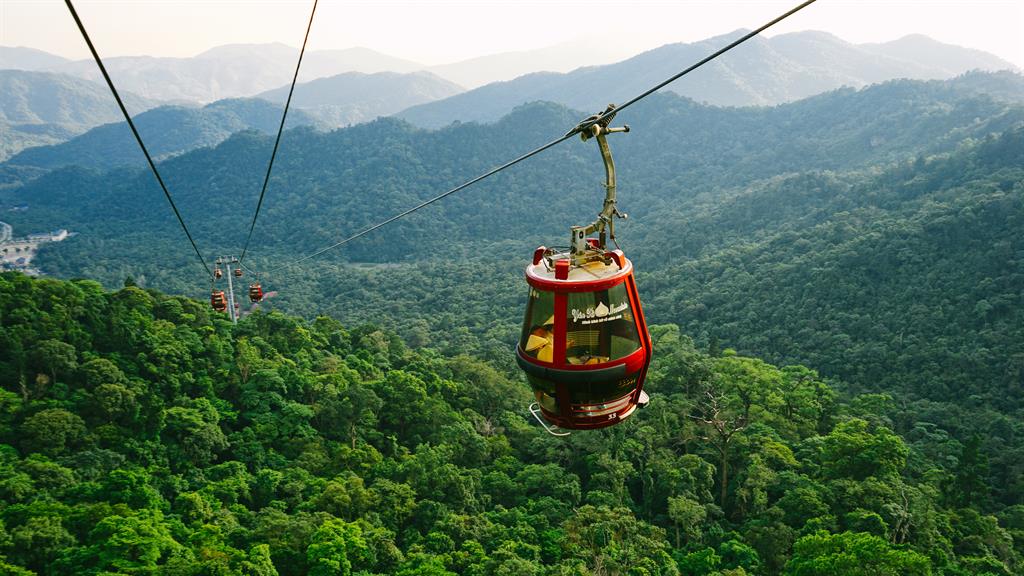 Back in the 13th century, King Tran Nhân Tông abdicated from the throne and retreated to Yen Tu to live as a Buddhist monk. In his search for spiritual enlightenment, he slept in a cave, built shrines and pagodas, and founded Trúc Lâm, the first Vietnamese School of Zen Buddhism. An old Vietnamese belief — ‘you may be charitable and lead a religious life for a hundred years but if you haven’t made it to Yen Tu, you haven’t reached the highest religious bliss’ — draws more than two million Buddhist pilgrims to the mountain each year.

And now there’s no reason to rough it like the monk king. The new Legacy Yen Tu MGallery by Sofitel, which starts at just £82 per night and is situated in the newly designed Yen Tu Village, is the area’s first five-star property. It’s the work of Bill Bensley, the legendary hotel designer who is behind some of the world’s most luxurious resorts.

The complex, five years in the making, has been sympathetically constructed to emulate a sprawling 13th-century monastery. Bensley and his team have stayed true to the region’s heritage and used traditional building materials and techniques.

‘We wanted to make it as authentic as possible, a full immersion into the 13th century,’ enthuses Bensley, who is here adding the final touches.

I find padding through the 133-room hotel’s arched stone halls utterly enchanting and I fully expect to trip over orange-robed monks gliding serenely, wafting Zen from ancient thuribles as I head to my room. The rooms are equally dramatic, all double-height ceilings, sack-covered walls and heavy wood doors that open out on to the mist-shrouded mountains. 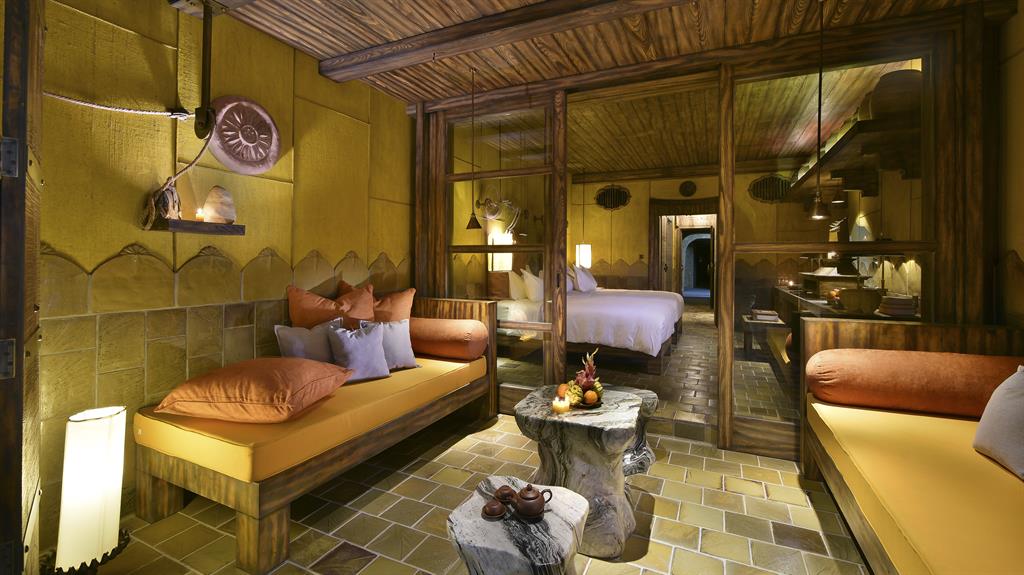 While the hotel caters for a more affluent market, the new village doesn’t ostracise the millions who descend on Yen Tu each year. Bensley has incorporated a new hostel, a prayer hall, restaurants and a marketplace into the village. The next phase, which launches early next year, will include a spa, a pool and a wellness centre.

Feeling pretty Zen after my meditation, I wolf down a magnificent breakfast of pho followed by French pastries, good coffee and passionfruit juice, and get ready to follow in King Tran’s footsteps up the mountain in search of my own enlightenment. Over 3,000ft high, it’s an onerous trek to the peak with thousands of stone steps. I’m told it takes around six hours or so to walk it but it’s raining and my knees aren’t what they were so instead I take the cable car, which was built in 2002 to enable the frailer pilgrim (and lazy tourist) to get up the mountain. 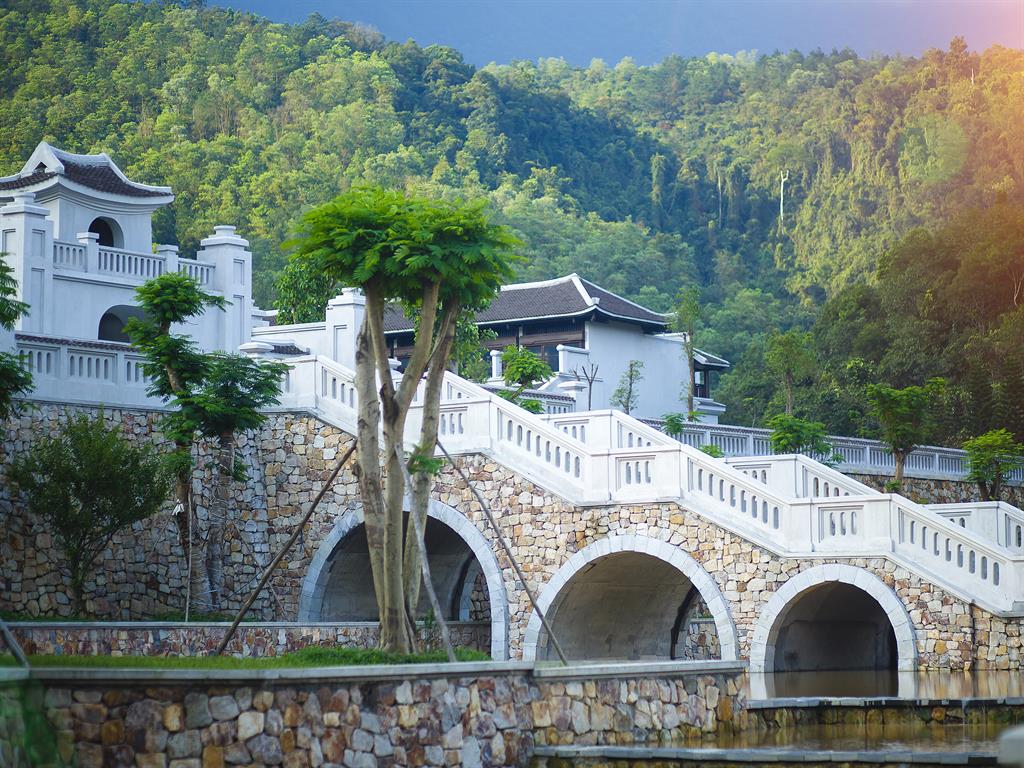 The two cable-car stations are connected by stone pathways through the bamboo and pine forest, chunky granite stairways leading off to the various incense-infused temples, ancient shrines and pagodas. On more than one occasion I am overtaken by octogenarian pilgrims dressed in little more than slippers, macs and nón lá, the conical straw hats. They zip up the steps like giddy teenagers.

At the very peak is the Dong Pagoda, an atmospheric bronze temple where the monk king meditated above the clouds. Due to the rain, the steps prove too treacherous to climb so I don’t quite make it to Heaven’s Gate (no surprise there). Instead, I stop at Buddha, a 12m-high bronze effigy of King Tran sitting in a lotus flower.

Post-climb, kicking back with a recovery margarita in Legacy’s beautiful Thien Tra bar, I’m feeling well Zen. With palms together and head bowed, I find my own path to spiritual enlightenment. Namaste.