THERE are few bars that would let inebriated patrons loose with a hammer but here in Flims it’s tradition. I take part in the ‘nail game’, the après challenge that originated in Swiss ski resorts. My eight new best friends — the local seasonaires — and I crowd around a tree stump in the bar and take it in turns to drunkenly hammer nails into it in one fell swoop, until the last person standing buys the shots (surprisingly, it’s not me).

Straddling the Ruinaulta Rhine Gorge, aka the Swiss Grand Canyon, Flims is a mountain village with snow-draped wooden chalets and pink-hued country hotels set amid a pine forest.

At its heart is the new shopping and retail development, the Stenna Building, and the Hide Hotel, by luxury ski operator Powder Byrne. Opened in December, the 47-room boutique hotel brings some colourful swank to this quaint alpine resort.

Cosy rooms with big balconies have sparkly walls, plush carpets and ruby red, emerald green and rich amethyst velvet draped across surfaces. My junior suite adds piste views and a large, deep bath to soothe my aching bones. Breakfast is included and served in the first-floor restaurant with cured meats and Swiss cheeses, bacon and eggs, plus breads and buns.

By the looks of the tanned Helly Hansen-clad crew huddled around the lobby’s fireplace guzzling goblets of vin chaud, the Hide is a hotspot for city slickers after a ski weekend, 90 minutes’ drive from Zurich. Powder Byrne has added it to the winter and summer programmes, and it includes access to a kids’ zone — a cross between a science museum and a giant playroom — plus free ski guiding.

It’s a short swagger from the Hide’s boot room to the lifts up to the Laax ski area, which has 235km of runs including a glacier and a snow park with the largest halfpipe in the world. Stop for lunch at Das Elephant (pictured below, mains about £16, daselephant.ch) at Crap Sogn Gion, a refuge named after a circus elephant who visited the station. 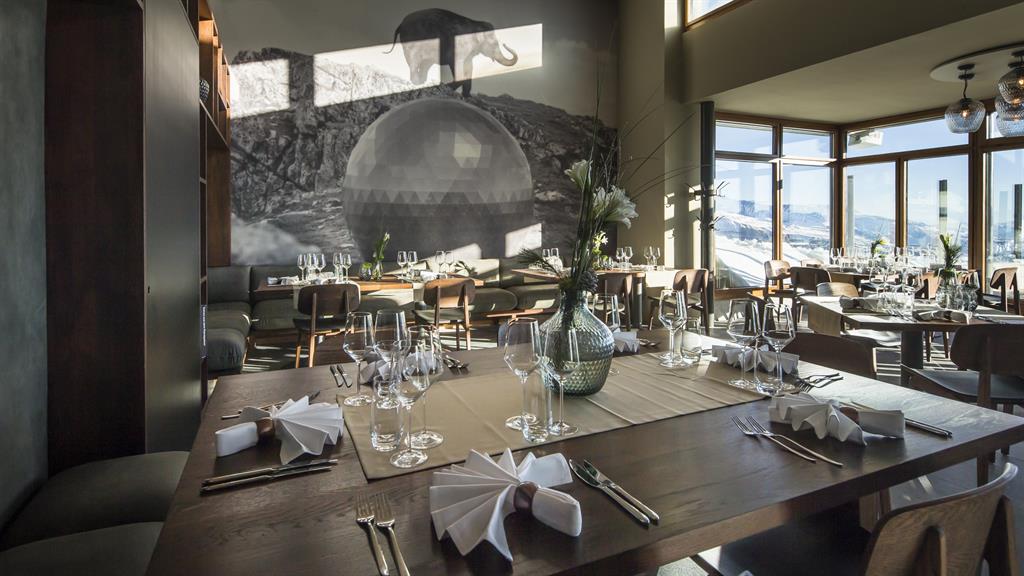 Work it off with a ski down to Laax for a Jäger sharpener in the IndyBar (shots from £3.85, indylaax.com) before taking a horse-drawn ride through the pine forest back to Flims for après at La Fabrica (beers from £4.15, lafabricaflims.ch). This steampunk-themed bar, next to The Hide, has cogs on the ceilings, dystopian Yoda statues and a circular ramp that winds around to an upper floor.

If you’re still going after dinner, cross the street to the lively Arena Bar (arenaflims.ch) and get ‘hammered’ with the seasonaires.