RIGHT now, two of the most romantic places on Earth are here in Cape Town. The first is, of course, the Love Island villa where the latest batch of lovelorn beauties have barely unpacked their skimpy, white string thongs.

And I’m here, with my boyfriend Dan, at the second iconic point — Table Mountain, where the breathtaking views of the Toblerone-like peak of neighbouring Lion’s Head, and the sweep of Atlantic Ocean beyond, have long made it the destination of choice for lovers (and others).

Tafelberg, as it’s known in Afrikaans, is the stonkingly huge, flat-topped monolith that squats in the middle of the city, visible from practically everywhere. My heart starts racing the moment we climb into the rotating cable car and I cling on to Dan — less out of passion than pure fear — as we’re whisked up the sheer granite rock face at 33ft per second (tickets from £16pp, tablemountain.net). I can only look at the dizzying view through my fingers but what a view — with an extra romantic atmosphere provided by the lilac dusk.

Four minutes later we reach a vertiginous 3,501ft above sea level and have miraculously timed it so that the sun is starting to sink, tingeing the sky gold as clouds spill dreamily over the edge. My head’s been totally turned and I’ve got eyes for nothing else, except the massive glass of local shiraz Dan buys me in the bar, a snip at £3 (thanks to the favourable exchange rate, prices here are delightfully 1970s).

The Mother City is giving off scorching vibes — nearly 30C, in fact — when I arrive in early January. And on day two, down at Boulders Beach (entry £8.50, sanparks.org), romance is in the air. We learn that, unlike Megan (Barton-Hanson) and Wes (Nelson), or — sob — India (Reynolds) and Ovie (Soko), some creatures actually mate for life. There’s a whole colony of African penguins here that live in joyous coupledom, after one of the cutest courting rituals I’ve ever heard of (Curtis Pritchard, take note): if a male penguin is interested in a female, he brings her a gift of a small pebble. If she rejects it, he just waddles after her with a bigger one. Seems female penguins aren’t that dissimilar from Love Island contestants after all, then.

The exact location of this season’s villa is being closely guarded but a tour around Cape Town’s ridiculously stunning coastline (£71pp for eight hours, daytours.co.za) throws up some hints. Along the curving roads of Clifton, one of the city’s wealthiest suburbs, modern glass-and-steel houses with ocean views can easily fetch a cool couple of million quid.

Another likely candidate is Camps Bay, a dazzling, South Beach-like sweep of golden sand lined with bars, restaurants and hip hotels. Behind it, on the slopes of the mountain, sit vast mansions. Try as I might, I don’t spot anyone in a dental-floss bikini posing by a pool in any of them. There are, however, many Islander types pouting on the rooftop of the Marly Hotel (themarly.co.za), where Dan and I head for a rather windswept cocktail. 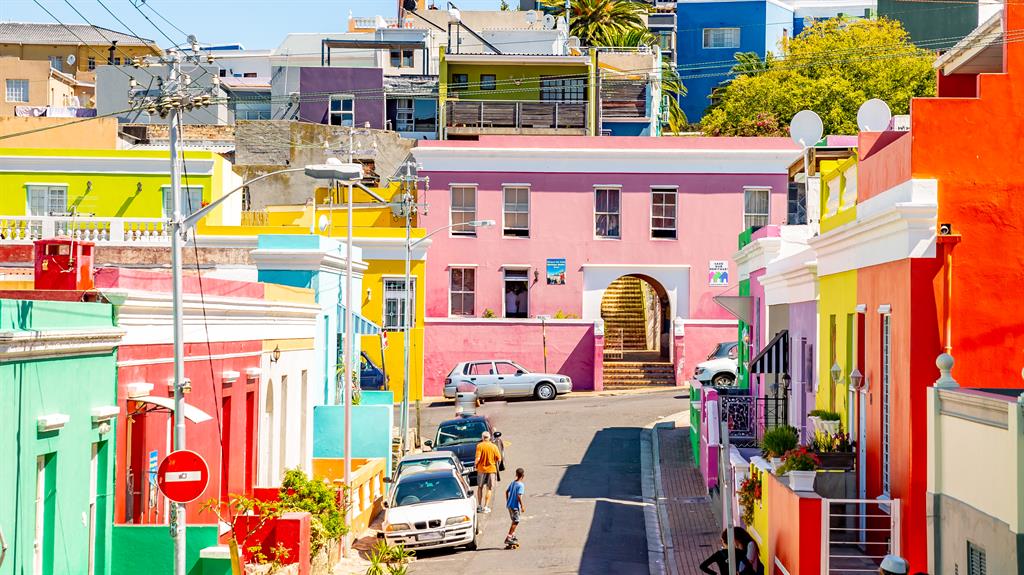 Even more romantic is the Surfshack Diner (surfshackdiner.co.za) next door where, over a delicious seafood feast, you can gaze into each other’s eyes, or at the enticing sea view in front of you — or, if you’re an Anton Danyluk type, check out the other hot bods on the beach.

If all else fails, you can’t go wrong with wine. Less than an hour from Cape Town are South Africa’s incredible winelands, which produce some of the best booze in the world. Dan and I head to Stellenbosch first and spend an amusing morning Segwaying through the vineyards of Spier (£20pp, spier.co.za), one of the region’s oldest wine farms, dating from 1692. 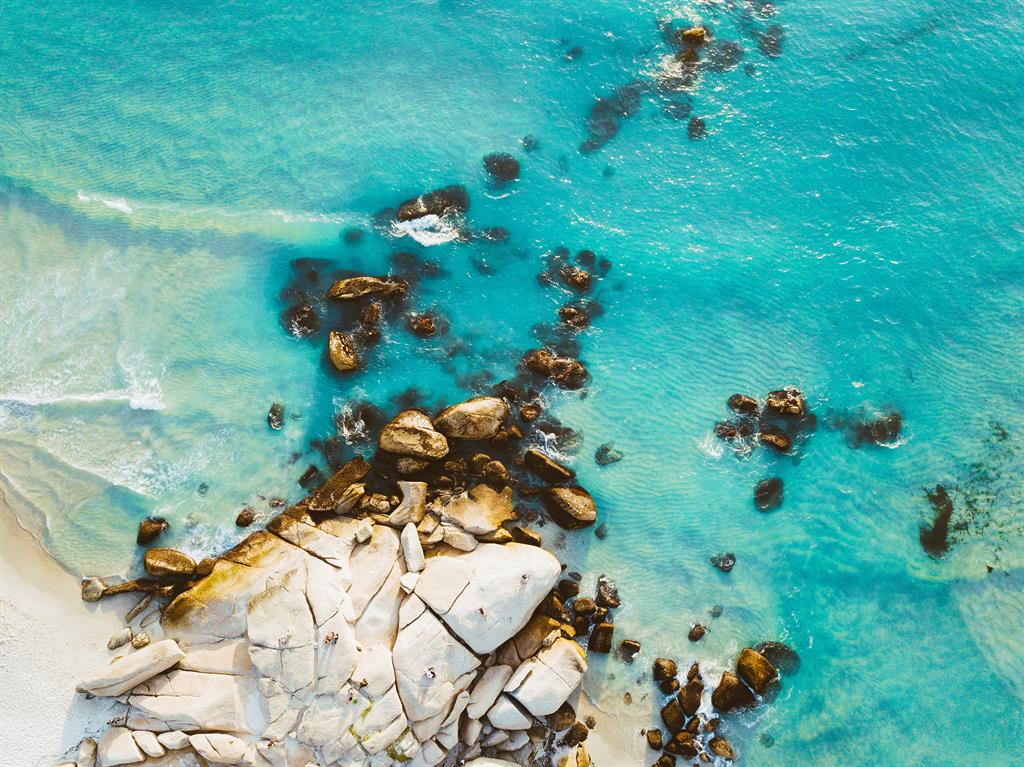 If your date still fancies you after seeing you grapple with a giant pair of motorised wheels, you’re basically in. Then it’s on to the quaint little town of Franschhoek, where I enjoy one of the best meals I’ve ever had — taking in roast venison and chocolate mousse — in one of the most magical settings: the glass-walled restaurant of La Petite Ferme (rooms from £323pn, lapetiteferme.co.za) with enchanting views over a valley full of vines.

On our last day, we clamber aboard the Wine Tram (tickets from £14pp, tastings extra, winetram.co.za), with several different routes stopping off at between five and eight vineyards each. By the time we’ve done three, we’re pretty sozzled but still have room to toast each other with SA’s equivalent of champagne, known as MCC (Methode Cap Classique) at Haute Cabrière (tasting £3pp, cabriere.co.za).

Who knows who will walk away with Love Island’s prize — and a new relationship — this year. Still, one thing’s for sure: if they fail to be seduced by South Africa, they’re a total and utter melt.

KLM flies from London to Cape Town via Amsterdam from around £516 return, klm.com; rooms at the Grand Daddy Hotel from around £152pn, granddaddy.co.za; rooms at Cape Vue hotel, Franschhoek, £192pn, capevuecountryhouse.com. For more info visit southafrica.net/uk/en and capetown.travel 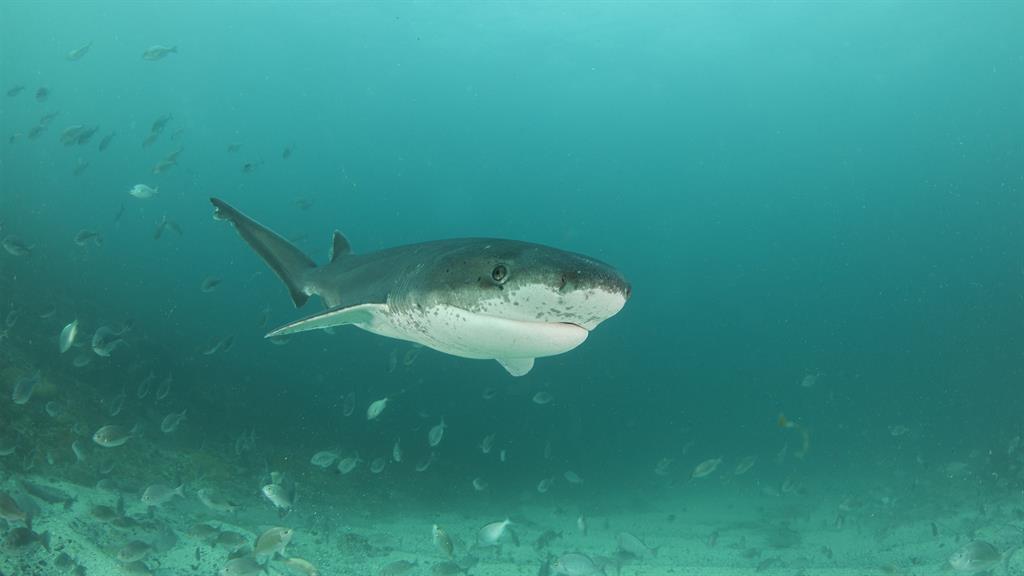 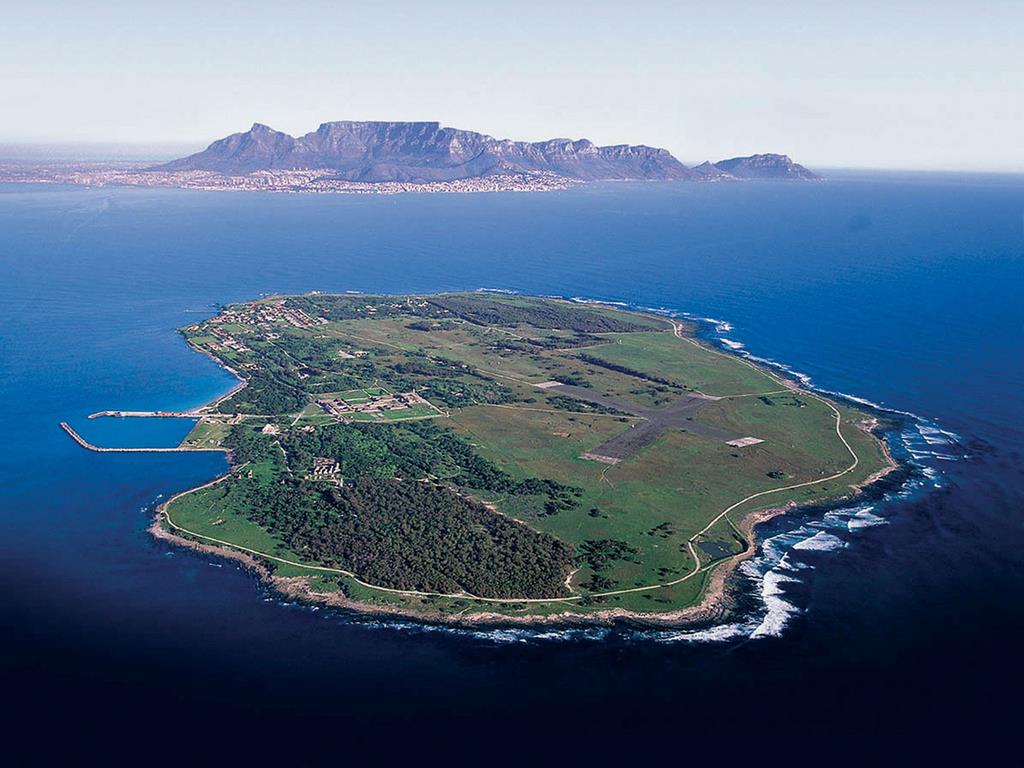 Fly high over the city in a helicopter, taking in Table Mountain, the stunning coastline, the Cape of Good Hope and Robben Island, where Nelson Mandela spent 18 years of his life. From £102pp, cityhelicopters.co.za 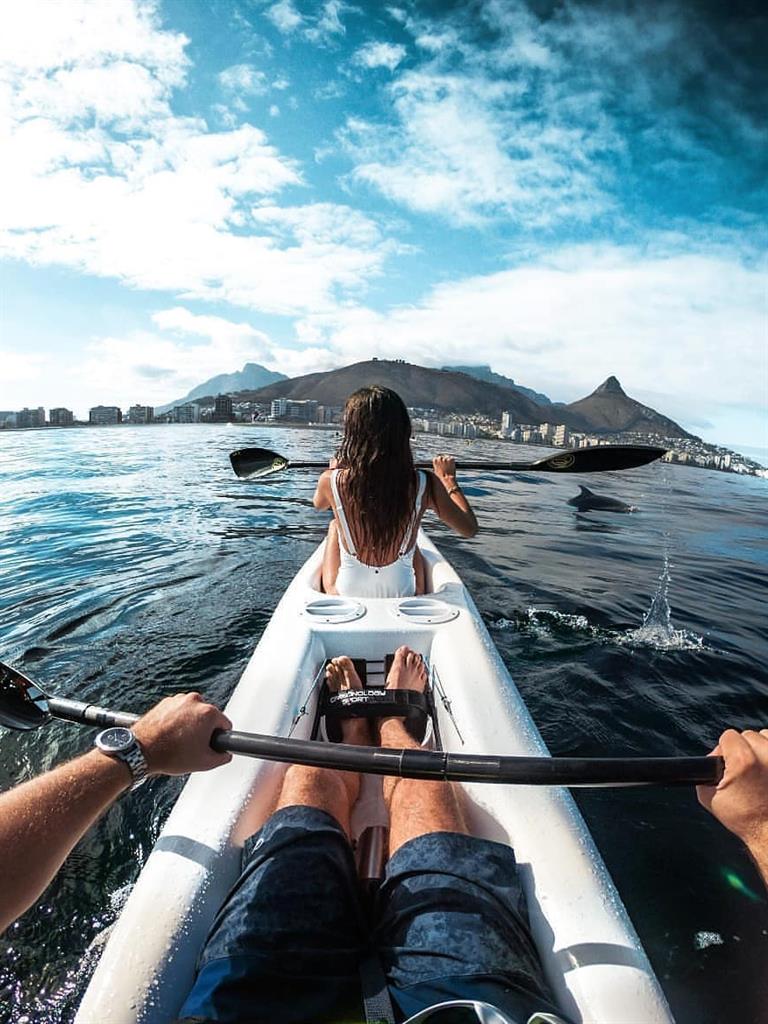 Kayaking out on the Atlantic Ocean is breathtaking, even more so if you bump into a pod of friendly dolphins. Plus being in a two-person kayak helps you learn to work together. From £24pp, atlanticoutlook.com 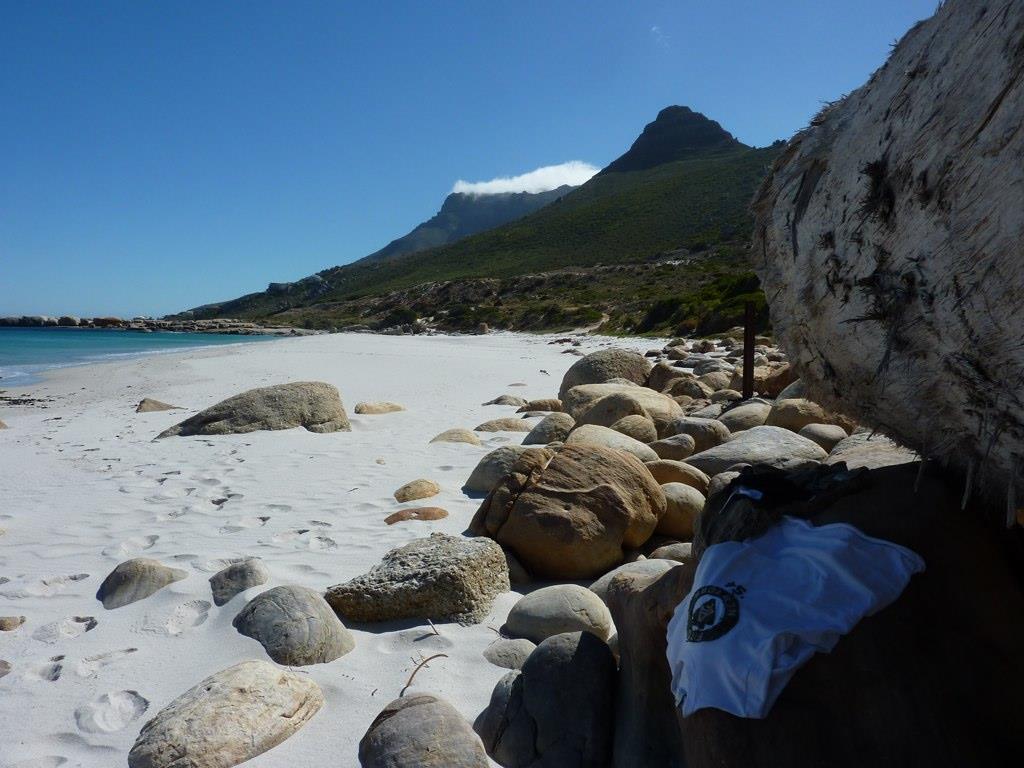 Love Islanders who really want to display the body beautiful should insist on a date at Sandy Bay, Cape Town’s only official nudist beach. It’s half an hour’s drive south of Camps Bay. 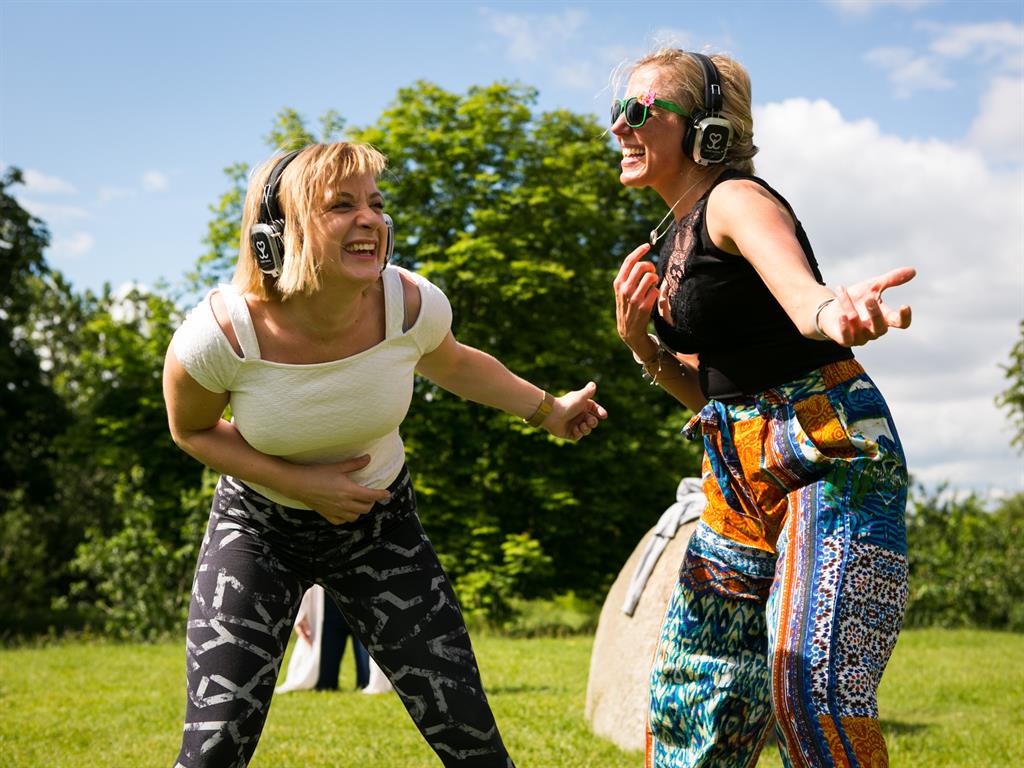 Take in a Secret Sunrise silent disco where, as the sun comes up, you dance to music only you can hear. Part meditation, part exercise, it’s a form of bonding with others. £5pp, secretsunrise.com