ENGLAND set up a World Cup quarter-final against Norway after defeating ill-disciplined Cameroon 3-0 in a remarkable last-16 clash in Valenciennes yesterday.

The Lionesses maintained their composure despite being on the receiving end of rough treatment, while Toni Duggan also appeared to be spat on by Augustine Ejangue.

Phil Neville’s side went ahead in the 14th minute when Cameroon were deemed guilty of a back pass and, from the resulting indirect free-kick, Duggan teed up England captain Steph Houghton to score.

Extraordinary scenes then followed as Cameroon made their displeasure known about two VAR decisions that went against them.

After Ellen White’s finish in first-half stoppage time was ruled out for offside, and the decision subsequently overturned, Cameroon’s players remonstrated with the officials and there appeared some doubt over whether they would resume playing.

Their anger then increased shortly after the interval when Ajara Nchout’s goal was ruled out for offside after a VAR review. The game was held up once more as Cameroon made further furious protests, with Nchout in tears. 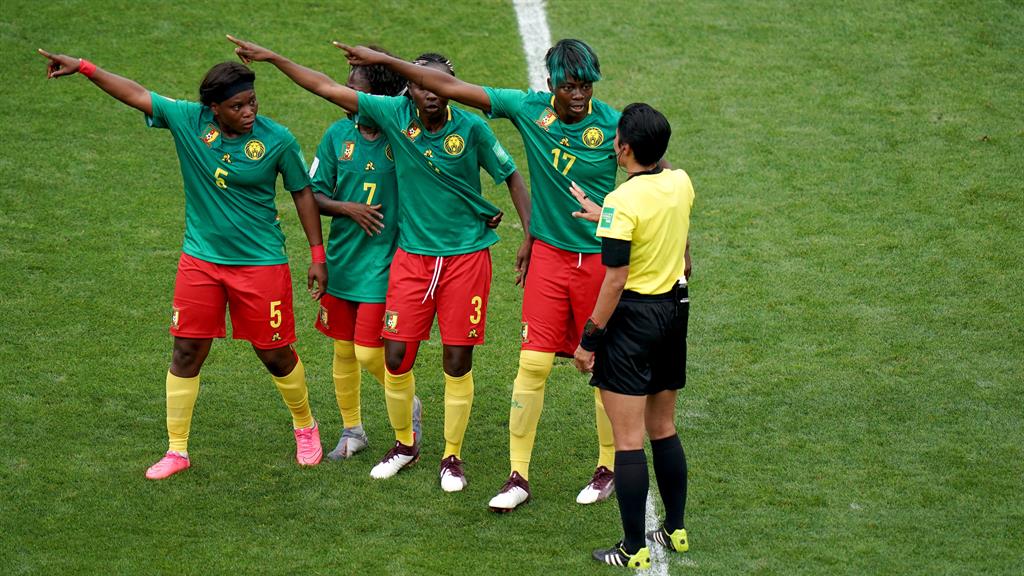 England survived some scares soon after, then extended their advantage in the 59th minute through Alex Greenwood, before referee Qin Liang made another VAR check following a Ysis Sonkeng challenge on Fran Kirby, with no penalty being given.

In the build-up to the match, Neville had described Cameroon – at 46 the lowest-ranked team in the last 16 – as ‘very unpredictable’ and few could have anticipated what would unfold.

Alain Djeumfa’s side were determined to impose their physicality early on as Lucy Bronze was shoved over by Raissa Feudjio and Nikita Parris received an elbow in the face from Yvonne Leuko, who was fortunate only to be yellow-carded.

And Cameroon should have ended the game with ten players but somehow Alexandra Takounda avoided a red card for a dreadful challenge on Houghton in stoppage time.

But having come through this test, England will now face Norway in Le Havre for a place in the semi-finals.

‘When we are talking about the development of women’s football and we’re proud of it, we now need to think about the level of the referees. This is going out worldwide but we are being let down by the officials. There are some good ones but not enough’ — Former England player Alex Scott

‘That could have been a career finisher, Steph is really lucky’ — BBC pundit Dion Dublin on the late foul on the England captain