ENGLAND’S progress through the group phase gathered momentum as they overpowered the United States 45-7 in a match marred by a savage challenge on Owen Farrell that produced the first red card of the tournament.

Farrell, a second-half replacement at the Kobe Misaki Stadium, was attempting to pick the ball up off the ground in the 70th minute when he was struck by a shoulder-led charge by flanker John Quill that caught him on the jaw.

The England captain crashed to the floor but was quickly back on his feet as a brawl erupted with Mark Wilson leading the shoving before being joined by a large group of his outraged team-mates.

Referee Nic Berry reviewed the footage and dismissed Quill, who could have no complaints at being severely punished for such a thuggish tackle.

Eddie Jones predicted that playing the USA would be like facing ’15 Donald Trumps — aggressive, brash, ready to take on the world’, but the biggest challenge was dealing with the suffocating humidity in Kobe.

With the roof to the ground closed, the stifling conditions made for an energy-sapping encounter for which England had prepared with two ‘heat camps’ in Treviso in the build-up to the tournament.

Wing Joe Cokanasiga plundered two tries and it was a more accomplished display than the underwhelming victory over Tonga that opened Pool C, producing a second successive bonus-point win ahead of the key battles with Argentina and France.

England’s set-piece battered Gary Gold’s underdogs in the first half before they cut loose, expertly directed by fly-half George Ford who was named man of the match.

Piers Francis (pictured below) was lucky to escape any punishment for a reckless tackle on full-back Will Holley in the opening seconds but otherwise Berry had a tidy match just two days after World Rugby released a statement criticising the overall performance of officials in the tournament. 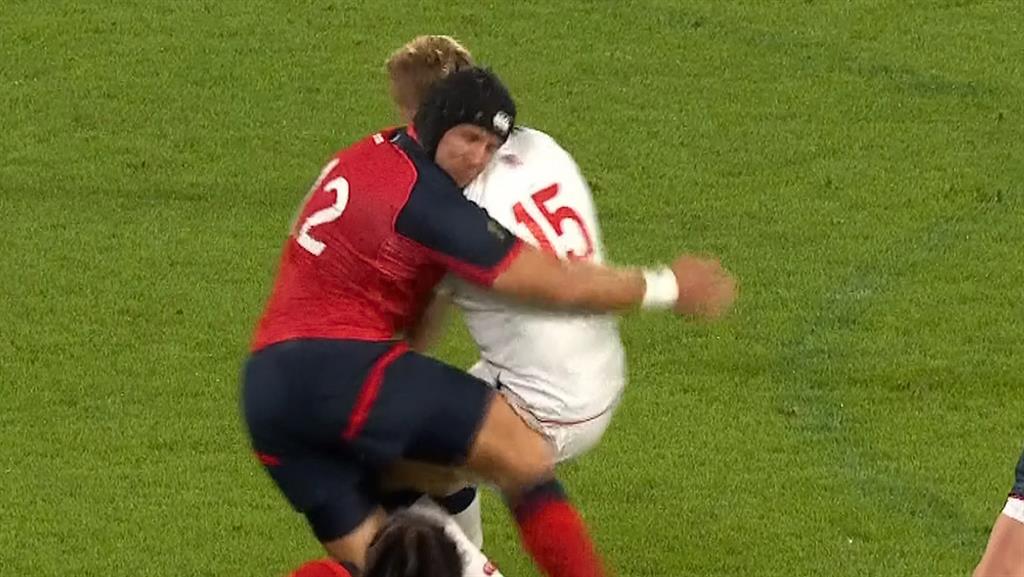 The set-piece dominance England enjoyed was helped when 19-year-old Eagles prop David Ainuu was helped from the pitch in only the third minute after falling awkwardly at a scrum.

And the odds of threatening an upset lengthened shortly after when a muscular run from Billy Vunipola sucked in defenders to create space that was exploited by Ford in the next phase by running through a large gap.

England were playing at a high tempo despite the heat and were successfully stretching the US, creating a chance for Cokanasiga who was well tackled by Blaine Scully.

The kicking game superbly directed by Ford and Willi Heinz was serving them well but their discipline was far less on point after conceding four penalties inside 15 minutes.

A driving line-out sent the USA hurtling backwards so when England were awarded a penalty in front of the posts, Ford opted for touch instead of taking the points and was immediately rewarded.

Once again the Eagles were scattered at the set-piece and Vunipola was at the bottom of the pile of white shirts as the pack crashed over.

Just as their line-out was dismantled, England pulverised the underdogs’ scrum and from the ensuing penalty they launched another arrowing line-out that ended with Luke Cowan-Dickie touching down.

The half ended with Jonathan Joseph scooping up Elliot Daly’s kick only for Cokanasiga to drop the final pass as the line beckoned.

Successive knock-ons by Joe Launchbury interrupted momentum as the second half was launched with a series of English attacks, but the bonus point arrived in the 47th minute when Joseph performed an elaborate dummy to create the opportunity for Cokanasiga to drive over.

The one-way traffic continued with Wilson, who had replaced Vunipola at half-time, making an impact through a series of purposeful carries and wing Ruaridh McConnochie was the next to cross as the beneficiary of some quick hands.

Lewis Ludlam pounced on a poor American line-out to restart the charge but with a four-on-one overlap down the left, Ford butchered what should have been a routine pass.

The Leicester fly-half made amends, however, by producing a neat step to enable Ludlam to cross before Quill was given his marching orders.

Having wasted another chance shortly before, Cokanasiga went over for his second try but the US grabbed a late consolation score through replacement Bryce Campbell as England were caught on the counter-attack.

Afterwards, England coach Jones declared himself ‘100 per cent’ happy with his side’s record of two wins from their opening games.

He told ITV Sport: ‘I think we are getting used to the conditions. It was 27 degrees and 70 per cent humidity, the ball was like a cake of soap.

‘We have got good players who can take a pass, so it must have been difficult conditions.’

Jones added: ‘We wanted to be on 10 points after two games, so we are perfect.’