THEY planned to cover Her Majesty’s Treasury in hundreds of gallons of ‘fake blood’ — but ended up soaking themselves and turning the street outside into a huge red puddle.

Extinction Rebellion activists drove up to the 100-year-old building in Westminster in an old fire engine for their latest stunt.

But when they turned on the high- powered hose they lost control and it snaked across the street spraying ‘blood’ — actually 400 gallons of water coloured with food dye — everywhere, but largely missing their intended target.

Within minutes, police were on the scene and arrested eight people — five men and three women — on suspicion of criminal damage. They also seized the vehicle.

The oldest to be arrested was Phil Kingston, 83. The retired lecturer said the building was targeted because of the government’s ‘inconsistency’ in claiming to be a world leader on climate change while pouring ‘vast sums into fossil fuel exploration and carbon-intensive projects’.

The stunt came ahead of a two-week ‘International Rebellion’, which is due to start on Monday and affect 60 cities worldwide. In London, protesters plan to shut down Lambeth and Westminster Bridges and occupy Trafalgar Square. They are also due to stage a sit-in at City Airport.

London mayor Sadiq Khan said the protests were diverting resources from an already over-stretched police force. Around 60 officers were sent to yesterday’s caper. 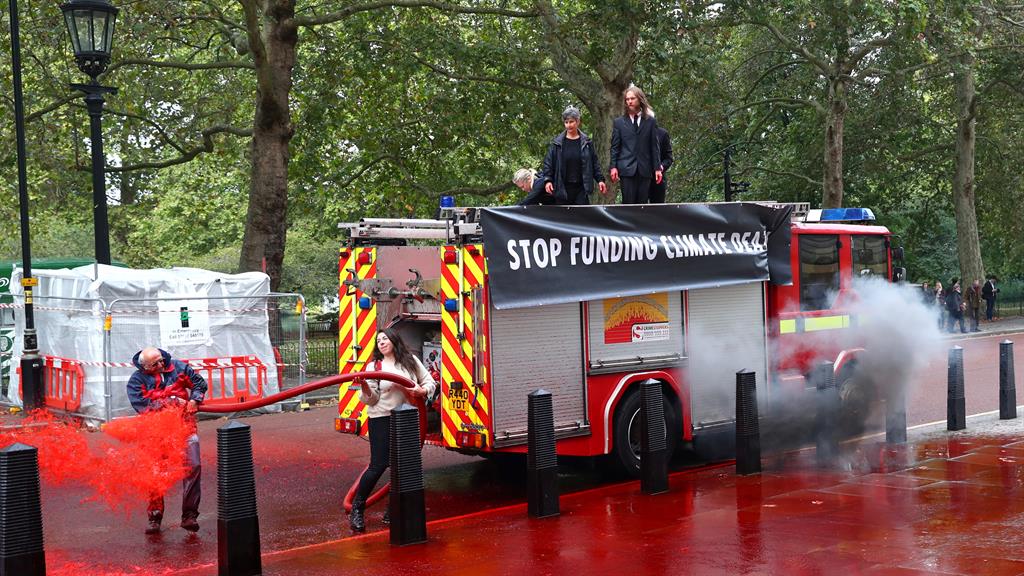 Mr Khan told LBC: ‘My message to those involved in Extinction Rebellion is, “Yes, we do face a climate change emergency. Yes, governments need to take much bolder action. But the way you are going about trying to persuade people I don’t think is effective”.’