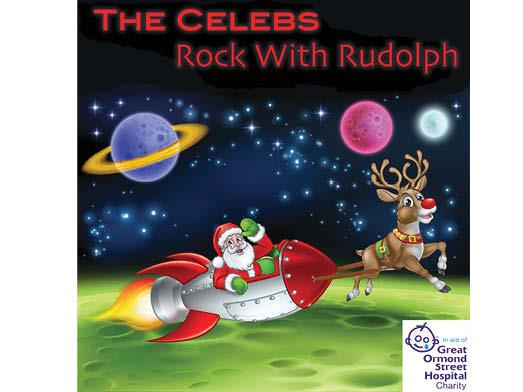 ‘I’m really proud to be part of this,’ says Shona, who plays Whitney Dean in the soap. ‘It has a really rocky feel and there’s lots of energy. It was good fun to record this — it’s catchy and you’ll have it in your head all day.

‘I’d love to sing more,’ she adds, ‘but at the moment I mainly stick to singing in the shower.’

So if you want to get your Christmas started, here’s Shona on her all-time favourite Christmas songs. Oh, and you don’t have to be a celebrity to sing along…

‘This is a classic. I love the feel of it. I like the steel drums and the reggae vibe. I love the video as well — they’re wearing what looks like dressing gowns and there’s a bad special effect of a star.’

‘There are sleigh bells on it, which is what you want with a Christmas song, and, again, it has a great video. It’s quite cheesy. There’s a bit where he’s in a sleigh with a girl who looks like she doesn’t want to be there. It’s all about having fun at Christmas.’

Happy Xmas (War Is Over) — John Lennon and Yoko Ono

‘It’s a bit of a tear-jerker. It’s all about coming together as people, hoping for a better year ahead and being thankful for what you have.’

Santa’s Coming For Us — Sia

‘I love Sia, she’s an amazing writer. This has a feel-good vibe and it makes you want to put your decorations up. It’s all about how Santa’s coming so we need to be prepared. Sia’s voice is amazing — it’s so unusual and distinctive, and the song is catchy.’

‘This is another one that gives me goosebumps and makes me cry. I’ve heard so many versions of O Holy Night and Celine’s is the best. She takes her time and builds up to those dramatic moments towards the end.’

‘I loved Destiny’s Child when I was younger. I love 8 Days Of Christmas because it makes you want to dance. This will come out at Christmas when me and my friends get together. Their harmonies were amazing — they could sing anything live.’

■ Rock With Rudolph by The Celebs is out now

Christmas No.1 hits that weren’t

How did the following songs not top the charts at Christmas? They all came close but not quite close enough. The Everly Brothers’ Wake Up Little Susie, for instance, in 1957 — although it was up against a bona fide Christmas-themed hit in Harry Belafonte’s Mary’s Boy Child. But Victims by Culture Club losing out to The Flying Pickets’ a cappella cover of Yazoo’s Only You in 1983?

And just in case you doubt it, consider that the greatest Christmas tune of the lot, Mariah Carey’s All I Want For Christmas Is You, has charted during 12 different Christmases, including the last five, yet only peaked at No.2 in 1994 behind East 17’s Stay Another Day. That would have been a worthy Christmas No.1 against any other competition but come on… DAVID BENNUN