A WOMAN who bought a box of duck eggs from Waitrose was stunned when she put them into an incubator as an experiment — and a little duckling hatched out.

Lauren Barton, 26, popped down to her local Waitrose last month and picked up the six-pack of Clarence Court Braddock Whites Free Range Duck Eggs, for £2.59.

But instead of scoffing the lot, English teacher Lauren popped half of the eggs into an incubator she had bought from Amazon to see if she could hatch a duckling.

And to Lauren’s delight, 28 days later, one of the eggs in the incubator started to show cracks — and after an ‘intense’ 48 hours of hatching, a tiny little duckling popped out.

Lauren, from Ipswich, Suffolk, has named the fluffy little chick Darwin — and says it is just like having a dog.

She said: ‘He’s gorgeous. He’s so friendly, he loves us completely.

‘He’s like a little dog — he’s so loyal and just follows us around everywhere, and wants attention all the time.

‘I think he thinks he’s a human, or we’re ducks.

It was certainly an experiment, but it was well worth it.’

Lauren, who teaches at Copleston High School in Ipswich, Suffolk, said she got the idea after reading another news story about someone who had also hatched supermarket eggs recently. 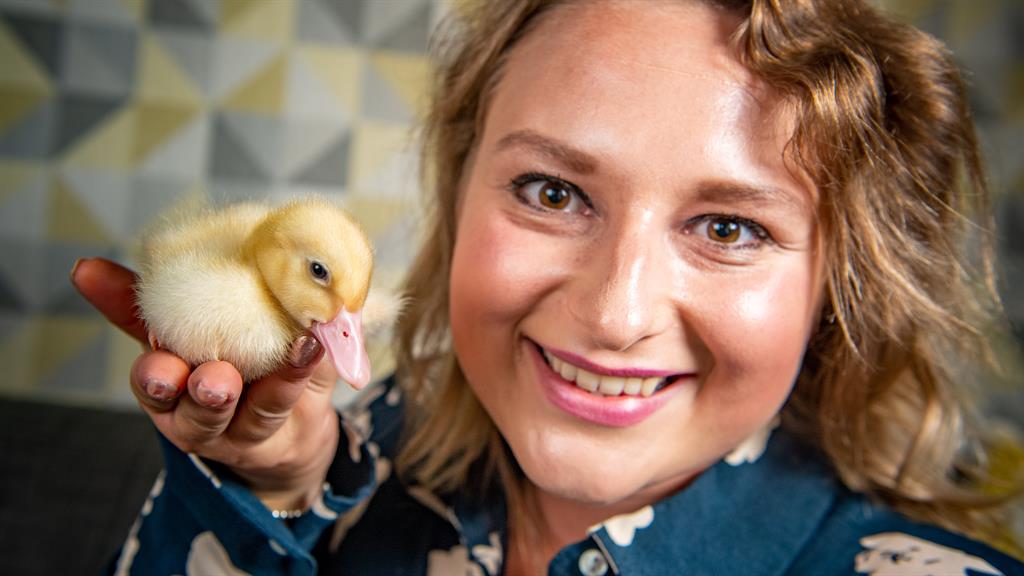 She said: ‘No one in my family thought it was a good idea because they said ducks are messy and hard work. My partner really didn’t want me to do it.

‘But I loved the idea, so I went ahead and did it.

‘The incubation was actually quite laborious, it’s quite intense.

‘The eggs spend a month in the incubator, but you have to turn them three times a day every day, and then you have to mist the eggs towards the end to keep their temperature right.

‘There’s a lot of work involved. It’s not like I could go out for the day and leave them to it.’

Lauren bought the smallest size of incubator she could find — meaning she could only fit three of the eggs into it.

She said: ‘I was shocked when I saw that two of the three I put into the incubator were viable and were growing. We weren’t really expecting it to work.’

And even though Darwin was the only duck that made it in the end, Lauren said that she had to wait a long 48 hours for him to emerge — and that she didn’t think he was going to survive.

She said: ‘On the day that he started cracking, it was my last day of teaching at school before the summer, and I was meant to be going out the next night with some of the other staff.

‘But when he still hadn’t come out the next day, I had to text them to say I didn’t think I was going to be able to make it out.

‘I did go in the end, but I had to cut it short to go home and check on the duckling.

‘I stayed up really late that night, and then went to sleep for a few hours and woke up again and in the end I had to help him out a little bit.

‘They say you’re supposed to leave them to break through the egg themselves, but I did help him along a bit — and then there he was.’

She joked: ‘I suppose it proves that Waitrose eggs are free range and are doing what they should be.’

Lauren is now besotted with little Darwin — who hatched last Saturday — and says she and her fiancé are planning on keeping him as a pet even after he grows.

‘He’s part of the family now,’ she said.

Lauren also has a cat and two rabbits — none of which seem perturbed by the new arrival to the house.