A DRUNK human rights lawyer who spat at a flight attendant when she refused to serve her a bottle of wine has been jailed for six months.

Simone Burns, 50, was filmed shouting at Air India cabin crew in a racist and foul-mouthed tirade during a nine-hour flight from Mumbai to London Heathrow last November.

Sentencing her yesterday, Judge Nicholas Wood said: ‘The experience of a drunk unrepentant irrational person in the confines of an aircraft is frightening, not least on a long-haul flight, and is a risk to safety.’ 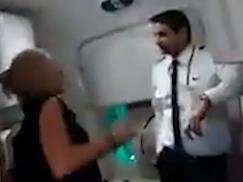 He said although her hour-long rant did not put the aircraft in danger ‘there is no escape at 30,000ft.’ Although Burns was of ‘impeccable character’ a jail term was inevitable, he added.

Burns, known as Simone O’Broin, was initially served three 25cl bottles of wine on the flight, then refused more.

The business class passenger labelled the crew ‘Indian money-grabbing c***s’ and was also twice caught smoking in the toilet. Belfast-born Burns, who lives in Hove, East Sussex, said: ‘I’m an international criminal lawyer. I don’t get any money for it by the way and you can’t give me a f***ing glass of wine.’

Burns later spat on supervisor Dastur Pervin and squeezed her arm so hard it hurt. She was escorted off the plane by three armed police officers at Heathrow. After admitting charges at Isleworth crown court, she was jailed six months for being drunk on an aircraft and two months for common assault, to be served concurrently. Burns was also ordered to pay Ms Pervin £300.