DRAMATIC footage captured the moment a teenage boy somersaulted four times through the air after being struck by a hit-and-run driver at nearly 60mph.

Seconds later CCTV cameras also showed police officers frantically performing CPR on Ibrahim Ahmed, 14, as he lay in the road. Miraculously the boy survived but has been left with life-changing injuries.

The video was released by police as Mohammed Casim Hussain (pictured) — who fled after the collision — was jailed for 16 months. 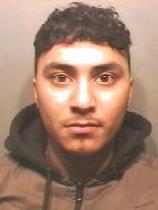 Hussain, 20, was being pursued by police in Luton on March 14 last year after they had become suspicious of the silver Volkswagen Golf he was driving. The chase ended when Hussain struck Ibrahim as he was crossing the residential street.

Hussain, from Luton, was captured on CCTV disposing of his jumper in a nearby school. On Tuesday, he was convicted at the town’s crown court of causing serious injury by dangerous driving.

Sgt James Thorne said: ‘Hussain drove in a dangerous manner that placed numerous people at risk of serious harm. His actions ultimately led to a 14-year-old boy being struck and left for dead. The pursuing officers did the right thing and stopped — without doubt their medical intervention saved the life of this young boy.’