CHELSEA strengthened their grip on the top four yesterday after a quickfire comeback gave them a vital 2-1 win at struggling Aston Villa.

The fourth-placed Blues are now five points ahead of the Manchester club and Wolves and look well placed to qualify for the Champions League.

Villa stay in the bottom three after this reverse. Kortney Hause’s first Premier League goal had put them ahead against the run of play but in truth Chelsea were good value for their win.

Ruben Loftus-Cheek was inches away from connecting with Mason Mount’s low cross in the first half as Chelsea looked the likelier scorers, while Willian curled a shot just wide.

Yet it was Villa who broke the deadlock in the 43rd minute, with Douglas Luiz crossing for Anwar El Ghazi at the far post — his effort was saved by Kepa Arrizabalaga, with Hause then scrambling in the rebound.

Lampard sent on Pulisic and Ross Barkley within ten minutes of the restart and that proved decisive.

First, Pulisic levelled after an hour, firing in Cesar Azpilicueta’s deep cross from close range. Then Azpilicueta set up Giroud, who saw his effort deflect off Conor Hourihane and into the net.

Jota did have one late chance for Villa but fired wide and Chelsea returned to London with the spoils.

Lamps wants Pulisic to be a fox in box 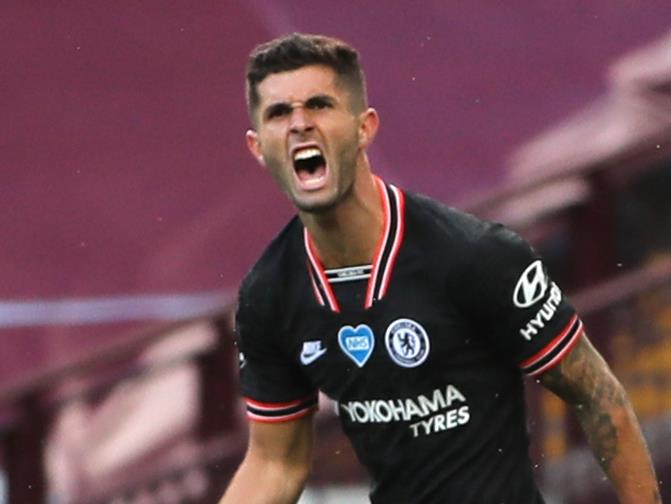 FRANK LAMPARD has told Christian Pulisic to keep popping up in the box after the super-sub helped Chelsea to victory at Villa Park.

USA forward Pulisic (pictured above) bagged the equaliser on his first appearance since January following injury problems as the Blues cemented fourth spot.

Boss Lampard said: ‘He will start games for us, of course, and I think he’s going to be a big player for us, not just in this run-in but going forward. He was hungry. The ability he’s got to arrive in the box, it’s a big thing, I’ve spoken about it with him all season.’

Dean Smith saw his Villans side blow the chance to leap out of the relegation zone and said: ‘Unfortunately a little bit of quality and fortune favoured them. It won’t be doom and gloom even though it’s a big disappointment.’