IT was a case of stuff the turkey, and the liberals too, when Donald Trump accused his opponents of trying to rename Thanksgiving.

The US president came out with his bizarre theory after continuing the annual White House tradition of pardoning a Thanksgiving turkey. ‘You know, some people want to change the name Thanksgiving,’ Mr Trump said during a rally in Sunrise, Florida, on Tuesday. Without giving any further details, he added: ‘They don’t want to use the term ‘Thanksgiving”.’

He told his supporters: ‘We’re not changing it, we’re going to have to do a little work on Thanksgiving.

‘People have different ideas why it shouldn’t be called Thanksgiving,’ he said. ‘But everybody in this room, I know, loves the name Thanksgiving, and we’re not changing it.’

There is no evidence that anyone is trying to rename the holiday, and Mr Trump did not say what suggestions have been made for an alternative.

Earlier at the pardoning ceremony in Washington, he targeted Democrat Adam Schiff, one of his chief antagonists in the impeachment hearings.

The president joked that the pair of North Carolina-bred turkeys he was about to pardon had been raised to ‘remain calm under any condition’, a trait that he said will be ‘very important because they’ve already received subpoenas’ from the House intelligence committee chairman.

‘It seems the Democrats are accusing me of being too soft on turkey,’ he told guests in the White House Rose Garden, as first lady Melania Trump stood at his side. 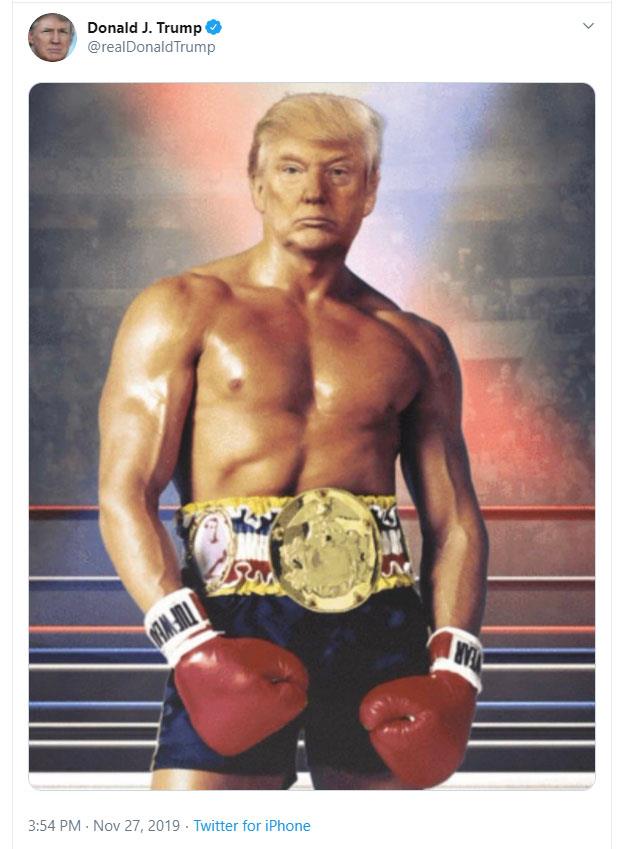 DONALD TRUMP yesterday looked ready for an impeachment battle — posting a Photoshopped image of his head on the topless body of Sylvester Stallone in boxing gloves. The US president did not provide an explanation or caption for his bizarre tweet, a doctored version of a poster for the 1982 film Rocky III.