THE Foreign Secretary has said the Government ‘would have acted differently’ to the US secretary of state after he refused to return the suspect charged with causing the death of Harry Dunn (pictured) to the UK.

In a statement, Dominic Raab appeared to suggest he would have agreed to extradite 42-year-old Anne Sacoolas if he was put in the same position as Mike Pompeo.

Mr Raab (below) said the rejection of an extradition request for Anne Sacoolas ‘amounts to a denial of justice’ and said the Foreign Office believes she should return to the UK.

The 19-year-old’s parents have welcomed the support from the Foreign Office (FCO) but have said their decision to continue to defend legal proceedings against them is a ‘huge arm around the US Government’s position’.

Charlotte Charles and Tim Dunn said Mr Raab will ‘effectively make us bankrupt’ after insisting the family pay legal costs for the judicial review which challenges the diplomatic immunity granted to Mrs Sacoolas following the crash. 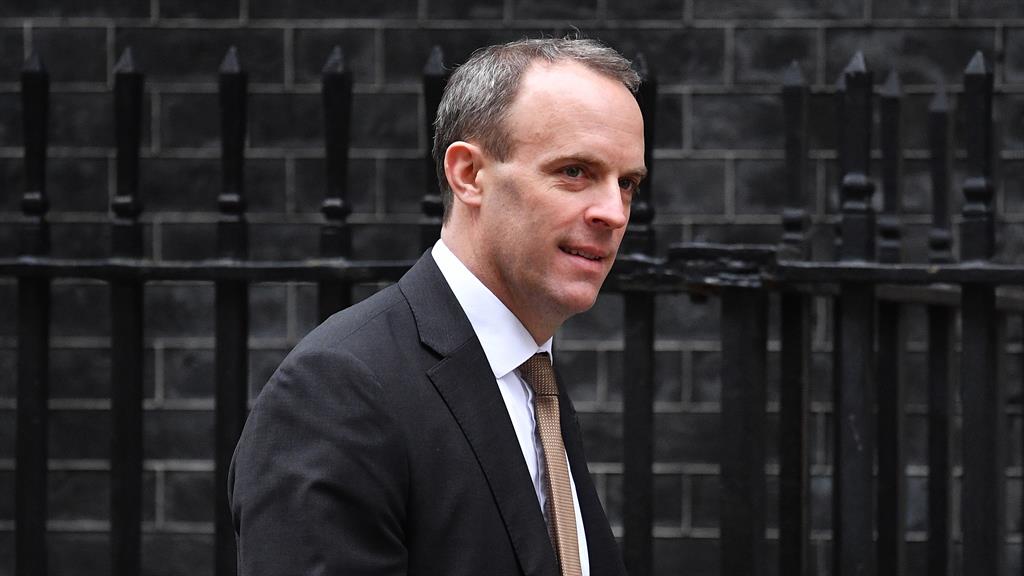 Mr Dunn’s parents were informed of Mr Pompeo’s decision to refuse the request in a phone call with their constituency MP, Andrea Leadsom, yesterday.

Lawyers acting on behalf of the Dunn family have said it is the first time in the 100-year history of the extradition treaty that such a request has been turned down by the US.

A spokesman for the US State Department said the request was rejected because it would render the invocation of diplomatic immunity a practical nullity and would set an extraordinarily troubling precedent.

The teenager died when his motorbike collided with a car outside RAF Croughton in August last year.

Mrs Sacoolas, 42, claimed diplomatic immunity following the crash and was able to return to her home country, sparking an international controversy.

The Foreign Office maintains that the suspect had diplomatic immunity, which has been disputed by the family, but Mr Raab said he would look to ‘resolve the issue’ surrounding any immunity given to staff at the base.

The Foreign Secretary said he expressed his disappointment at the decision to refuse the extradition request to the US ambassador today.

Reacting to the extradition refusal, Mr Raab said: ‘I called the US ambassador earlier to express the Government’s disappointment about this decision.

‘We feel this amounts to a denial of justice, and we believe Anne Sacoolas should return to the UK. We are now urgently considering our options.

‘I also explained that the UK would have acted differently if this had been a UK diplomat serving in the US.

‘I emphasised that work to improve road safety on and around the Croughton base must continue, and the need to resolve the issue whereby family members at RAF Croughton are immune from criminal prosecution.’

In response to Mr Raab’s comments on the extradition refusal, the teenager’s family said: ‘We are obviously grateful for any intervention that the FCO is making on our behalf.

‘However, the fact remains that the FCO are still defending the judicial review proceedings.

‘It remains our position that intelligence officers at RAF Croughton have diplomatic immunity and that if we dare challenge that in court they will seek to effectively make us bankrupt if we lose the case by forcing us to pay legal costs.

‘That amounts to a huge arm around the US Government’s position that their (the US) personnel are free to come to the UK, kill UK citizens or shed their blood, and then get on the next plane back home.

‘How they have the front to maintain that position after last night’s decision is a complete mystery to us and should trouble everyone on this side of the pond.

‘As things stand, it matters more to the FCO that the status quo be maintained and protected than the lives of their own people and their families’ ability to seek justice in the event of the worst happening.

‘If we have that wrong, they are more than welcome to make that concession now or meet with us to explain why they will not do so.’

Business Secretary Andrea Leadsom, the constituency MP for Harry Dunn’s family, has said the suspect charged with causing the teenager’s death ‘should come back to the UK’.

In a tweet, Ms Leadsom said: ‘I am deeply sorry that extradition has been refused.

‘This was a tragic road accident where a much loved young man died.

‘His family are heartbroken. The person who has been charged by the CPS should come back to the UK #Justiceforharry’

Ms Leadsom met with US ambassador Woody Johnson, the commander of RAF Croughton Colonel Bridget McNamara and the Chief Constable of Northamptonshire Police this morning at an undisclosed location.